Vancouver Was Awesome: The Only Cafe's Neon Seahorse

“What’s your favourite neon sign in Vancouver?” I ask people this question a lot . See, being a neon historian means that I am met with puzzled looks all the time.
0
May 18, 2011 7:42 AM By: Jessica O'Neill

I ask people this question a lot. See, being a neon historian means that I am met with puzzled looks all the time. “Neon? Really? Why?” It’s not until I ask people to tell me their favourite sign that the puzzlement is replaced with understanding. That’s when they take a moment to think – really think – about all of the unique vintage signs around the city.

Along with the flying pigs at Save On Meats and the swinging gal from Helen’s in North Burnaby, the most common answer I get is “that seahorse on East Hastings.” 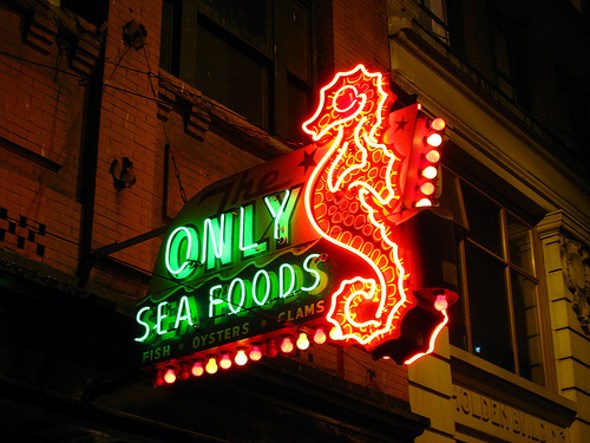 The Only all lit up - courtesy of SqueakyMarmot

That seahorse is the mascot of what was, until last February, Vancouver’s oldest continuously operating restaurant, the Only Seafoods Café. Located across from Pigeon Park, the café was once renowned in the city for its fish and chips, oyster stew and steamed clams – but in the post-Expo years it slid into trouble as the neighbourhood around it changed. The Only ultimately closed in 2010  due to a drug dealing scandal and health code violations.

It was with a gasp that, last February, I noticed the sign was gone. I was guiding a group of Olympics tourists on a Sins of the City walking tour and my eyes filled with tears as I tried to convey to this group of out-of-towners just how much that sign — and every historic Vancouver sign — means to me.

Vancouver ended up one of the great neon cities of the last century almost by accident, when a license for Claude Neon’s wondergas of the 1920s ended up in a bankruptcy sale and fell into the hands of an enterprising businessman named George Sweeney. Seeing neon’s potential, he started Neon Products, a company now owned by the Pattison Group.

Within 30 years, Vancouver was blanketed with neon — over 19,000 signs at its heyday. As trends changed, neon – once seen as classy and exciting – started to seem trashy and tawdry, prompting morality squads of the day to equate its presence with prostitution… and littering.  A by-law passed in the late 60s, spurred by this vocal minority, restricted the giant, perpendicular signs that hung out over the sidewalk. Neon's popularity declined rapidly, and most of Vancouver's most iconic signs were junked. A huge collection of what remains is housed by the Museum of Vancouver. 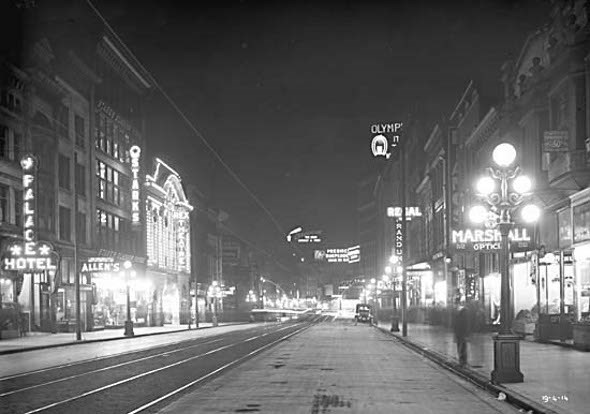 This by-law had an exception for any existing neon signs (and has recently exempted Granville Street) but now only a few dozen in the city have hung on. See, neon is expensive to maintain. The average business owner with a fully operational authentic neon sign is paying anywhere from $100 to $300 per month to Pattison signs, who own most of them, for maintenance and rental. For a business barely eking out a profit, this sometimes isn’t worth the cost.

The Only Seafoods Café was no exception. Opened in 1912 under a different name and purchased in 1916 by Greek immigrant brothers Nick and Gustave Thodos, the Only was the the place to grab some fresh-baked bread and bowl of clams after a day strolling the shops along East Hastings in its heyday or after a night partying at its many burlesque houses and nightclubs. Ask anyone who dined at the cafe in its heyday about their meal and their eyes will glaze over and their mouth water as they recount the Greek touches to Nick’s fresh shellfish, the briny oysters and the sautéed octopus on offer. This was serious food.  I wish I could have tried out their menu!

The Only was run by members of the Thodos family until 1992 when economic changes to East Hastings Street made it hard for them to continue. (A block down, the great department store, Woodward's, closed the following year.) Longtime waitress Wendy Wong stepped in and saved the day, adding the popular fish and chips to the menu and serving her customers with a smile. Less than 20 years later, however, things went downhill and the café was closed.

The sign, one of the city’s most precious, was designed in 1950 by senior artist Timer Goodwin at Neon Products. It includes some of the most popular neon design aspects of the day: a row of blinking bulbs around the rim; a friendly mascot; the sidewalk overhang; bright colours that reflect wonderfully in Vancouver’s constant rain.  It’s a joyful, exciting sign, one that captivated me both as a child and as an adult.

And after the Only closed it was left, unattended and unlit, for months.

Enter the Portland Hotel Society (PHS). Just before the sign was about to be remanded by Neon Products, PHS stepped in and asked to rent both the sign and the building, which also houses the Logger’s Social Club.

In a conversation with the PHS’s Mark Townshend (who graciously took time out from the Insite hearings in Ottawa to speak to me) I wondered why a grassroots organization that works to “provide supportive living space for the hardest 'hard to house' people in the Downtown Eastside” would be interested in a neon sign?

Townsend explained that the PHS is interested in a holistic approach that includes taking care of the neighbourhood’s heritage buildings as well as its citizens. The sign restoration (completed with the help of Pattison signs, who called in Timer Goodwin himself to assist with the process!) is phase one in a three-phase plan to refurbish the building’s facade and interior (including wonderful tin ceilings) and re-open the Only in the next 12 months, with its original menu, as a training kitchen for residents of the DTES. 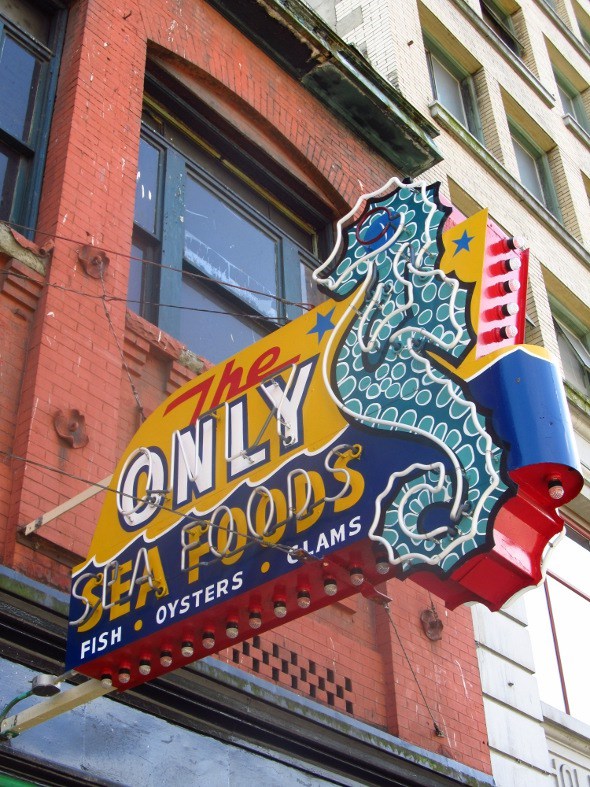 As for the sign, that jolly luminescent seahorse: It’s back up! Townsend expressed remorse that the building is currently without power, meaning that the Only’s sign is unlit for now, but I for one am overjoyed to see it back in action, a beacon on a street that still boasts Canada's largest collection of original neon.

Special thanks to John Atkin and Christian Dahlberg for all of their help with my neon research.

Vancouver company cuts deal to cut world's largest uncut diamond with Louis Vuitton
Jan 16, 2020 10:42 AM
Comments
We welcome your feedback and encourage you to share your thoughts on this story. We ask that you be respectful of others and their points of view, refrain from personal attacks and stay on topic. To learn about our commenting policies and how we moderate, please read our Community Guidelines.