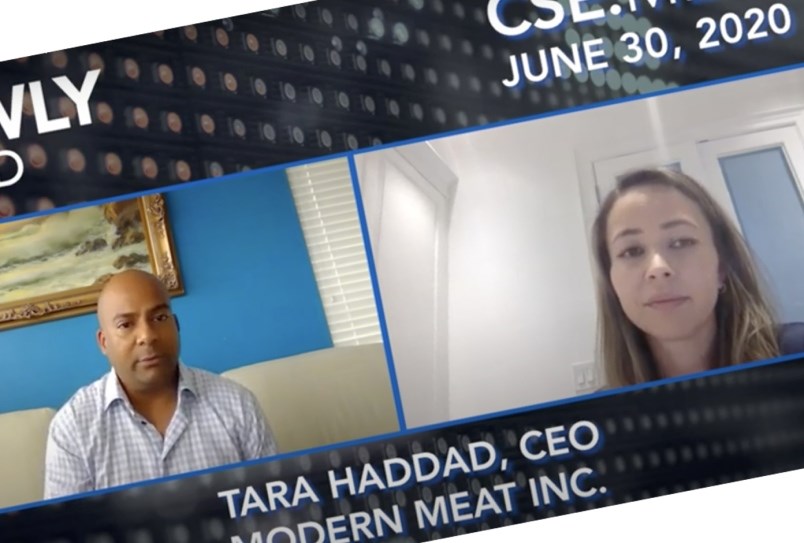 Facing accusations of serious stock offenses, Tara Haddad is the new CEO of Modern Meat, which the Canadian Securities Exchange promoted on its website on June 30, the day it was listed. Screenshot

A North Vancouver-based vegan meat company has gone public with a new CEO who has been accused of serious stock offenses by the BC Securities Commission (BCSC).

Navis was previously trading for $0.30. Modern Meat started trading at $1.25 per share and has seen its stock rise to as high as $4.50 on July 15, when 1.9 million shares traded on the exchange, despite the fact the company has yet to report any revenue or earnings. But 28.3 million shares trading at $4.50 per share would put the market cap at $127.35 million.

Haddad, 46, directs Saiya Capital Corp. She is also a realtor with Royal LePage Sussex and once ran for West Vancouver city council in 2016.

The commission is investigating Haddad, Saiya and other purported consultants for conduct abusive to the capital markets.

The commission has been investigating for close to two years, with the 26 hearing respondents and their respective companies – the alleged purported consultants known as the “Bridgemark Group” – yet to face a hearing date.

Most of the alleged purported consultants, including Haddad and Saiya, have since had their limited trade orders lifted, save for two alleged “primary architects,” one of whom is Jackson – Haddad’s brother and director of BridgeMark Financial Corp., which has many connections to the hearing respondents.

The CSE approved the Modern Meat reverse takeover on June 17 and posted a video interview with Haddad on its website on June 30 as part of its “Newly Listed” segment.

The CSE acts as a storefront for public companies to sell their shares. It purports to approve the directors and officers of its listed companies, for suitability, much like how a business chooses what products it can legally sell.

Asked to explain how the CSE approved the listing with Haddad at the helm, vice-president of listings and regulations Mark Faulkner stated, “An individual being named as a respondent in an investigation isn't necessarily enough to deny a listing.”

Faulkner said listing approval also rests with the BCSC, which happens to have direct oversight of the CSE.

Commission spokesperson Brian Kladko confirmed that hearing respondents “are allowed to participate in the capital markets, subject to any temporary orders.”

Faulkner said “public disclosure by the securities commissions about allegations and open investigations provides investors with cautionary information they should consider in making investment decisions.”

However, none of Modern Meat’s CSE disclosure documents mentions Haddad being a subject of the BCSC investigation.

Haddad’s lawyer, Peter Heinen, said Haddad and Modern Meat are complying with all disclosure requirements. Haddad declined an interview, however Heinen noted the company is seeking national distribution of the vegan meat alternative, derived largely from pea protein. The product’s competition is the Beyond Burger.

So far, Modern Meat can be found in boutique Lower Mainland grocers and restaurants.

Navis bought Modern Meat, whose main asset was a vegan protein burger recipe. Modern Meat can produce up to 2,000 burgers and 100 pounds of crumble at its production facility, according to the June 30 CSE listing statement.

A June 30 CSE filing states: “The initial goal is to manufacture and deliver up to 100,000 products, 50,000 pieces of each of the Modern Burger or Protein Plus as well as the Gourmet Burger for the first 12 months.”

Green Times has done work for marijuana companies. Awareness had previously worked as a consultant with Kootenay Zinc Corp., a shell company that is a hearing respondent and was once headed by Jackson and Haddad, at separate times.

Public filings show insiders and associates of Modern Meat, including some Bridgemark Group members and many closely associated with them, are poised to profit significantly from such a jump in the stock, and do so with relatively little risk.

That’s because many of them owned cheap stock in Navis, previously headed by Jackson, also a CPA and a prolific stock promoter.

Brady has stated Liu is the other alleged “primary architect” of the scheme, alongside Jackson.

Navis split its stock shortly before the Modern Meat takeover, leaving 11.5 million Modern Meat shares (valued at $0.15) in the hands of these original shareholders. As part of the acquisition, the CSE disclosed those shareholders: Haddad herself has 2,000,000 shares; Haddad’s husband, Abeir Haddad, has 1.9 million shares; BridgeMark’s former secretary and respondent, Danilen Villanueva, and her company, Detona Capital Corp., has 240,000 shares; Bridgemark investigation subject Wilson Su has 1,000,000 shares; and four people with the family name of Jackson’s brother-in-law, Ryan Venier, have 350,000 shares each – all BCSC hearing respondents, save for Su, a realtor for the Jacksons.

Additionally, two respondents to an Alberta Securities Commission notice of hearing, similar to the BCSC, have 1.7 million Modern Meat shares: Lisa Jackson, who is a realtor and is married to Anthony Jackson, has 700,000 shares, and Yoon Kyung has one million shares. A Seungkap Kim is shown as having one million shares, as well.