Alex Edler is the best Canucks defenceman ever, which is the problem
Mar 3, 2018 7:14 AM By: Daniel Wagner 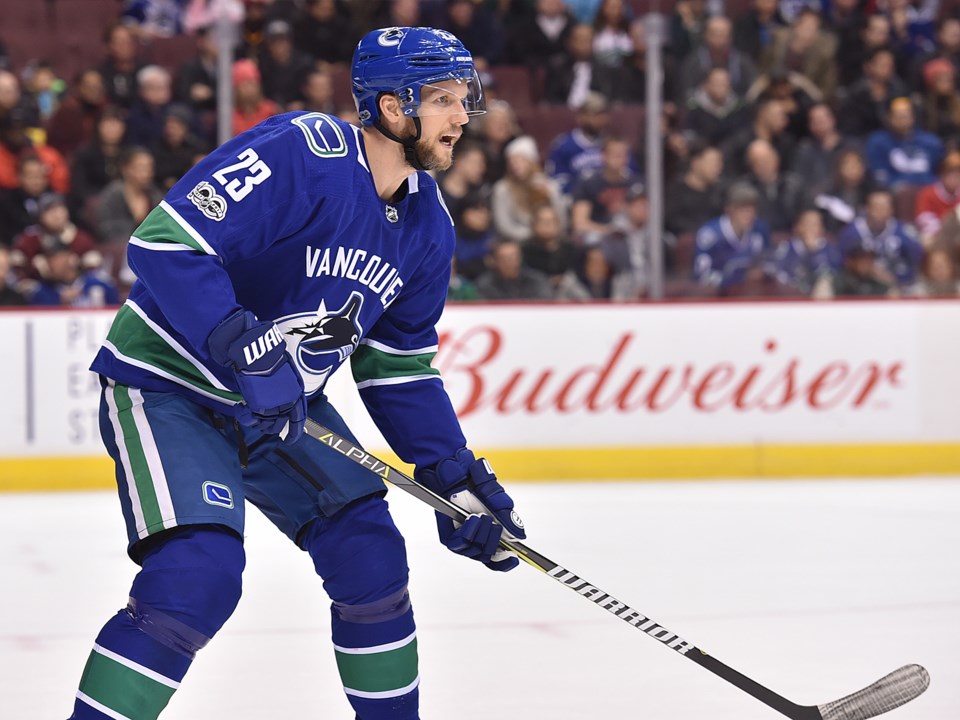 Alex Edler shouts for the puck

The Canucks may have lost Friday night’s game against the Nashville Predators, but fans who tuned in or showed up at Rogers Arena were still treated to a special moment in franchise history. When Bo Horvat tipped in Alex Edler’s point shot in the first period, Edler’s primary assist tied him with Mattias Ohlund for the most points from a defenceman in Canucks history.

His assist on Daniel Sedin’s goal in the third period broke the record.

The quiet and reserved Edler likes to stay out of the spotlight, but it was unavoidable Friday night. He made a point to give credit elsewhere, including to the player he passed.

“It means a lot to be up there with [Ohlund],” said Edler. “He was a mentor for me and it was important to have him here my first few years. It wasn’t just how he played on the ice, it was how he acted off it, and I’m very grateful for that.

“My game has been going kind of like the team. We had a few years where we weren’t that good and my game kind of flattened out a bit. I’ve been feeling pretty good and with our system, you’re held accountable.”

“He does a lot of things that people don’t realize,” said Henrik Sedin. “People want him to be a true superstar and he’s a guy who does everything.”

The history of the Vancouver Canucks is littered with good, but not great defencemen. The closest the Canucks ever came to having a true number one defenceman was Paul Reinhart, who led the team in scoring during the 1989-90 season, but he lasted just two seasons in Vancouver before back problems ended his hockey career.

Longevity matters when you talk about the history of a franchise, which makes Edler the best all-around defenceman in franchise history. That may be a controversial statement to some; you could point to Ohlund instead, or maybe Jyrki Lumme or Ed Jovanovski instead, but Edler has quietly put together a fantastic career, all of it with the Canucks.

Edler led the 2010-11 Canucks — the best team in franchise history — in ice time per game, and can play any role, from shutting down the top forwards on the other team to quarterbacking the power play.

“He can put up points, he can defend, he blocks shots, plays PK, plays power play,” said Daniel Sedin. “He can do it all out there and that’s rare to see in a defenceman. The guys in here really respect him and have for a long time.”

The biggest problem with Edler is that he is the best defenceman the Canucks have ever had, which invites all sorts of undue criticism because of who he is not.

When Canucks fans look around the league, they see teams boasting number one defencemen like Drew Doughty, Victor Hedman, Duncan Keith, and Erik Karlsson. They look at great teams of the past and see Chris Pronger, Nick Lidstrom, and Scott Niedermayer.

Edler suffers in comparison to number one defencemen like these, just like most defencemen would. But most defencemen don’t also bear the burden of being a team’s top defenceman during some of the highest and lowest moments in franchise history.

Now Edler is on the wrong side of 30, when most defencemen decline and he’ll soon regress into the defenceman his detractors have always claimed him to be. He’s not there yet, however, and he’s shown this season that he can still devour big minutes in all situations, quarterback a power play, and shut down opponents on the penalty kill.

With just one more season remaining on his contract, Edler might not be a Canuck much longer. He deserves more respect while he’s still here.

Vancouver Canucks 2019-20 Report Card: Chris Tanev
Sep 17, 2020 5:27 PM
Comments
We welcome your feedback and encourage you to share your thoughts. We ask that you be respectful of others and their points of view, refrain from personal attacks and stay on topic. To learn about our commenting policies and how we moderate, please read our Community Guidelines.