Brock Boeser returns to the Canucks lineup, and not a moment too soon 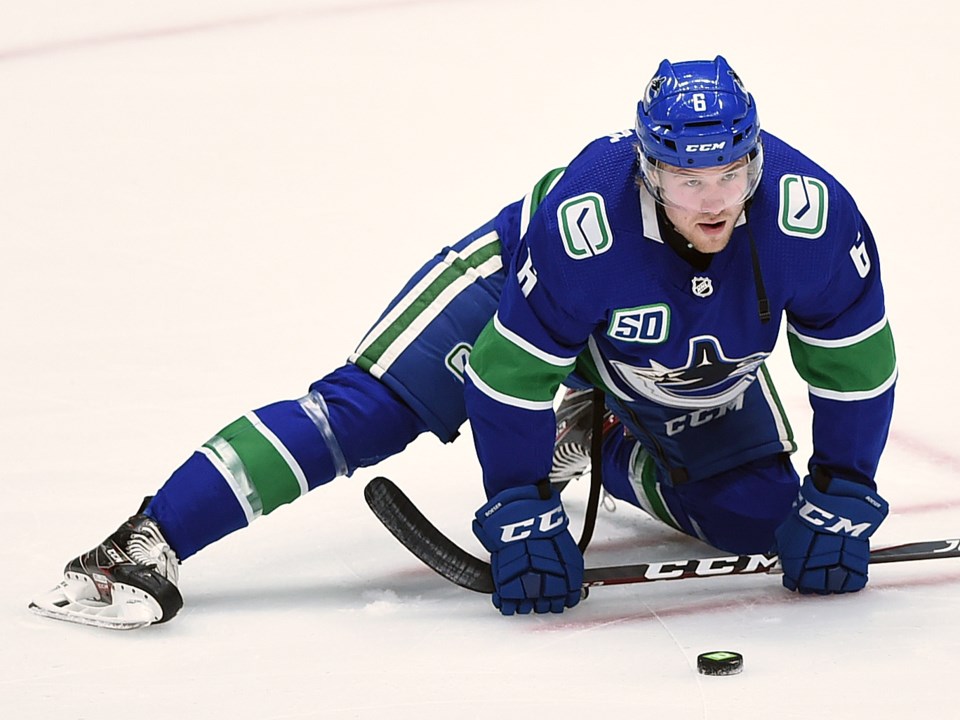 Brock Boeser stretches prior to a game with the Vancouver Canucks. He's expected to make his return to the lineup on Tuesday night against the New York Islanders. photo: Dan Toulgoet

The Canucks got some good news this week at a time when they badly needed some: Brock Boeser is back.

The sniper is expected to be in the lineup against the New York Islanders on Tuesday night, a welcome surprise considering Canucks GM Jim Benning had previously reported he could miss the rest of the regular season.

“I’m in tonight,” said Boeser to reporters after Tuesday’s game day skate. “I’m ready to go and help this team out any way I can.”

It raises questions about why his injury was reported as an eight-week timeline in the first place, but Boeser suggested it was because other Canucks have had the same injury and faced different timelines.

“I think we’ve had a few guys in the past that have had different timelines,” said Boeser, “so it was kind of hard to say when I’d be ready, but I was doing everything I could to get back as fast as I could.”

The Canucks have badly missed Brock Boeser since he left the lineup a month ago with fractured rib cartilage.

As much as the Canucks have struggled without Jacob Markstrom, their issues started before Markstrom got hurt, with the second-worst record in the NHL since February 1st. They’re currently just outside the playoffs, one point behind the Minnesota Wild. A big reason for their struggles has been the absence of Boeser.

The Canucks quickly traded for Tyler Toffoli to play in Boeser’s spot on the top line, and Toffoli has been good, but he doesn’t quite fill that Boeser-sized gap. One of the issues is that, by the numbers, the top line with Elias Pettersson and J.T. Miller has been better defensively this season with Boeser than they have been with Toffoli.

Meanwhile, Bo Horvat has played with a Franken-winger stitched together from two imperfect forwards: Loui Eriksson when the Canucks needed defensive responsibility and Jake Virtanen when they needed freewheeling offence.

It was an imperfect solution for Horvat’s wing: with Eriksson they could shut down opposing lines but struggled to create anything offensively. With Virtanen, the line was more dangerous offensively, but his defensive issues make it harder to use them as a match-up line.

At practice on Tuesday, Boeser was on Horvat’s line with Pearson, suggesting that the Franken-winger experiment has ended. Boeser provides plenty of offensive pop and has shown plenty of chemistry with Horvat in the past, but he also has taken big steps forward in his all-around, two-way game, making him a better fit in a match-up role.

“Bo and Peers and whoever they’re playing with always go against the top guys and I’ve personally felt I’ve taken some strides defensively,” said Boeser. “I know if I’m with them tonight, I’ve gotta be prepared in that aspect. Then again, I think if we play our game we can get a lot of offensive zone time and produce for the team.”

Boeser’s return also gives the Canucks the option of reuniting the Lotto Line — putting Boeser back with Miller and Pettersson — and bumping Toffoli down to the Horvat line. Toffoli also has a strong two-way profile and past chemistry with Pearson from their years together in the Los Angeles Kings organization.

That gives the Canucks a stronger top two lines and allows them to be more deliberate with the construction of their bottom six. It looks like both Eriksson and Virtanen will play with Brandon Sutter, while the line of Antoine Roussel, Adam Gaudette, and Zack MacEwen, which recently saw success against the Colorado Avalanche, will stay together.

As for the power play, the Canucks are keeping the top unit from the last month intact, putting Boeser on the second unit.

For Boeser, the quick return to the lineup is some welcome good luck in a career that has thus far been filled with bad luck when it comes to injuries. He has yet to play 70 games in a season thus far in his career, though he could reach that number if he stays healthy for the Canucks’ remaining 14 games.

“I think it’s just part of the game. You could say it’s unlucky or whatever, it’s just kind of frustrating,” said Boeser. “It’s rare, breaking your back, then from that compensating, having a different injury, and then taking just a small little soft bump and something popping. It sucks, but I try to look at it as a positive and come back and be fresh.”

Perhaps that will help the Canucks the most: Boeser is well-rested, even if he may have to take short shifts Tuesday night, as he acknowledged with a smile. His return will hopefully provide a spark to the rest of the lineup as they look to halt their recent slide in the standings.