For a player with 9 points in 13 postseason games, Brock Boeser is getting a lot of flak from Canucks fans. Perhaps it’s just the overall tone of social media, which tends towards the negative, but Boeser has been repeatedly criticized for being "invisible" or "too slow."

Notably, Boeser has just 3 goals in the playoffs, something that becomes very noticeable when the Canucks have been shut out twice in three games against the Vegas Golden Knights. The team needs goals right now and Boeser is supposed to be a sniper that can provide those goals.

Of course, the entire team had trouble getting chances from dangerous areas in Game 3, not just Boeser. Breaking down the Golden Knights’ defensive structure to get those chances will be a key to success in the rest of the series.

“We’ve got to do a better job finding those areas,” said Tyler Toffoli on Sunday. “I think it comes down to having the will to get there. I think we all have to take a look at our game from yesterday, find out what we need to do better, and go from there.”

Canucks head coach Travis Green acknowledged that the team needs Boeser’s scoring, but it’s not always as easy as it seems.

“I’m sure he wants to score and he knows that we could use a goal here or there from him,” said Green. “There’s a reason guys that find areas to score and come up with goals get paid a lot of money, because they do things that aren’t just teachable. I do know that in playoff hockey, you’ve got to get to the front of the net and sometimes it’s just getting an ugly goal that gets you going.”

“I’m not worried about Brock,” he added. “He’s working hard, he’ll find a way, he’s just got to keep shooting the puck and looking to find space when he can, and also go to the hard areas.”

There are a lot of reasons why Boeser might not be playing as well as fans expect. One is that there may be things happening in his personal life that are particularly difficult to deal with in the quarantined bubble.

Another is that Boeser hasn’t actually been as bad as people think. His underlying statistics certainly paint a rosier picture — he’s third among Canucks forwards in expected goals percentage in the playoffs — a reflection of a game driven more by subtleties than playing with the type of pace that gets noticed by most people watching.

The biggest issue, however, is that the expectations may just be far too high.

When Boeser broke into the league, it looked like he was going to be a superstar. He scored 29 goals in his rookie year, on-pace for 38 over a full 82-game season. At All-Star Weekend, he not only won the Accuracy Shooting competition, but led the Pacific Division to victory in the “game” itself and was named All-Star Game MVP.

Not only did fans believe the Canucks had a future 40-goal scorer on their hands, it was an open discussion whether he might reach 50. The Canucks have never had a Rocket Richard winner — the award hadn’t been inaugurated yet when Pavel Bure led the league in goals in 1993-94 — but Boeser had fans believing they would in the near future.

The expectations were clearly too high for Boeser, who regressed to a slightly above average shooting percentage, then dipped below average this past season. Instead of hitting the 30-goal mark and beyond, Boeser scored 26 goals in another injury-shortened sophomore season, then managed just 16 goals this past COVID-shortened season.

It certainly seems like some zing has gone out of his once-deadly wrist shot, as he’s no longer picking the corners he used to. Boeser has gone from future superstar to a complementary piece in the Canucks’ top six.

What happened along the way, however, is that Boeser became a far more complete player.

Boeser’s impact since his rookie year has shifted and he’s actually become far more impactful at the defensive end of the ice. That shows up in the shot maps from HockeyViz, which account for contextual factors like teammates and competition. Essentially, Boeser makes the opposing team’s shots 10% less dangerous when he’s on the ice at 5-on-5. 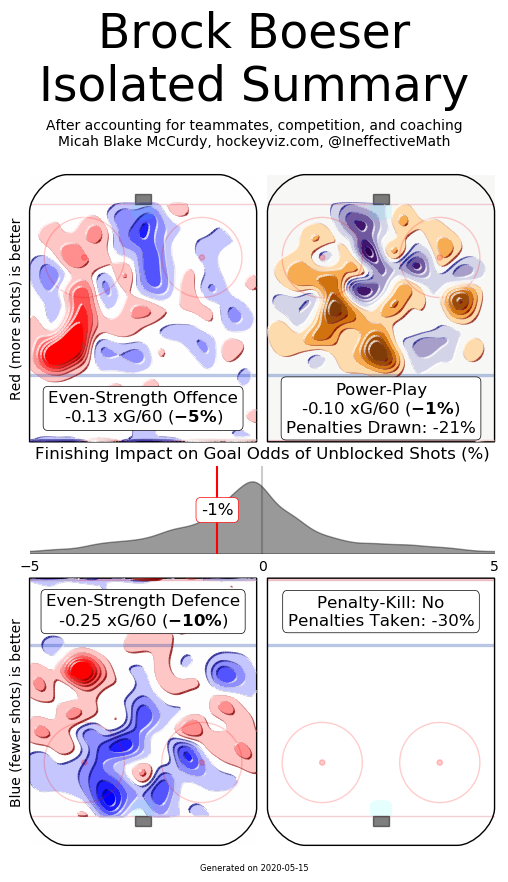 A lot of that defensive impact actually comes from work Boeser does in the offensive zone while forechecking and battling for pucks. That’s an area where Boeser has still been strong in the postseason despite his lack of goals and something that can and should lead to more scoring.

“I do like his work, I think he’s skating, he’s trying to get in, cause turnovers,” said Green. “It’s easier said than done just to get open shots in the slot. A lot of it comes off turnovers and creating that open space when the [opposing] team is going the other way.”

There was a clear example of that in Game 4 against the Minnesota Wild, where Boeser picked off a mid-air pass at the Wild blue line and set up J.T. Miller for a chance from the top of the faceoff circle.

Boeser has had a significant impact in forechecking and puck battles. His forechecking doesn’t always result in a big, noticeable hit, but it often comes up with the puck, which is more important. He’s also been stronger on puck battles than we’ve seen in previous years, extending possessions for the Canucks or eliminating chances for opponents.

Combined with some of the other subtleties to his game — his positioning, his patience with the puck in the defensive zone, his underrated passing — and you have a player that has made a difference without scoring goals.

Here’s the issue: as much as Boeser has done a lot of the little things that helps a team win games, what they really need from him right now is big things. Big things like his bomb of a slap shot that chased Jordan Binnington from the net in the deciding Game 6 against the St. Louis Blues, his last goal in the playoffs.

Hopefully, Boeser’s hard work away from the puck starts to translate into more scoring chances with the puck.

The Canucks desperately need the power play to be a difference maker against the Golden Knights
Aug 24, 2020 3:23 PM
Comments