Two games from the end of the preseason, the Vancouver Canucks have some difficult choices to make.
Sep 30, 2015 10:28 PM By: Harrison Mooney 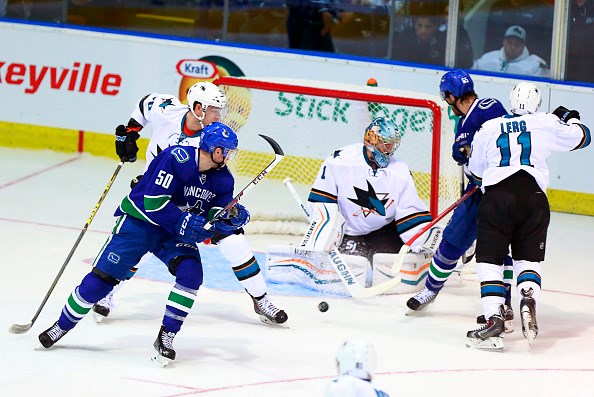 Two games from the end of the preseason, the Vancouver Canucks have some difficult choices to make. Is Jared McCann ready to take the leap, becoming the second 19-year-old in two years to crack the opening-night roster? Or maybe he'll have to share that honour with fell 2014 first-rounder Jake Virtanen, who remains with the club. What about Brendan Gaunce, who may not have Virtanen's explosiveness, but plays a sturdier game, at this point? And then there's Adam Cracknell, who has positioned himself as a more hard-nosed option between Brandon Prust and Derek Dorsett. Can he surprise everyone and stick with the big club?

There are a lot of questions left to be answered. But you'll notice that none of them involve Alexandre Grenier, which might explain why the wing prospect is on his way back to Utica to join the Comets.

Grenier had an all right training camp. At one point, he earned a look with the Sedins, a prime opportunity if there ever was one. But he showed very little with them, and from that moment on, he faded into the background, outshone by Virtanen, Gaunce, McCann and Cracknell. Thus, home he goes.

You have to feel for him. In years past, Grenier probably makes this team. But this year's training camp has been a strange one. Since when do the Canucks have, like, prospects? It's a totally new experience. And, unfortunately for Grenier, this crop of kids, most of them first-rounders, simply had more to offer than he did. That's just bad luck. The moment he's ready to challenge for the job, a busload of super-talented teenagers shows up? Hardly ideal.

He'll be back, though. The Canucks like Grenier, and with his size, strength, and two-way game, it's probably a foregone conclusion that he'll get some time in Vancouver this season. But with McCann, Virtanen and Gaunce clogging up the top spots on the depth chart at wing, he's going to have to wait awhile.

The cut brings the Canucks training camp roster down to 30 players, meaning there are seven more cuts to make before all is said and done. With two games remaining, and that last game usually used as a tune-up for the opening-night lineup, we can probably several more cuts before the weekend.