The Canucks made another round of cuts Monday morning, sending Cole Cassels, Nicklas Jensen, Joe Cannata, Alex Friesen, Blair Jones, and Ludwig Blomstrand to Utica.
Sep 28, 2015 11:21 AM By: Harrison Mooney 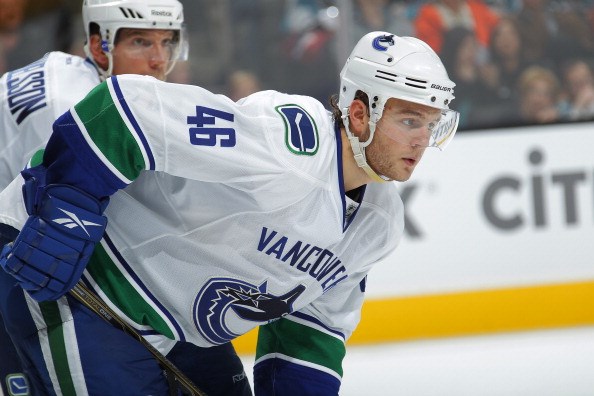 None of these cuts are overly surprising, although you have to imagine Nicklas Jensen is beginning to get frustrated. The 2011 first-rounder made his NHL debut in 2012-13. A year later, he played 17 games with the Canucks, putting up three goals and three assists, and appeared poised for a regular NHL job in the near future.

It hasn't come to pass. And worse, Jensen now appears less close. It has to be a kick in the teeth to be headed to Utica already, especially when the Canucks have kept so many other young wingers around: Alex Grenier, Brendan Gaunce, Jake Virtanen. Admittedly, everybody's development is different, but one imagines it's a real annoyance to be on a plane to Utica while the first-rounders that came after you are getting a longer look.

It's not undeserved, though. Jensen showed flashes, but he's a four-year pro, of sorts, at this point: he should be a little more consistent, and look a little more experienced by now, not to mention a touch more comfortable throwing his weight around. But while he should be feeling the heat, it's not like this is the end of the line for him. He's skilled, he's big, and he's just 22. The team is hardly done with him. It's a safe bet he'll see some time with the Canucks this season.

Cole Cassels is the other notable cut here, but it's not too surprising either. He looks promising -- he just doesn't look quite ready. He's also been completely outshined by Jared McCann. So it's off to Utica, where the do-it-all centre will no doubt become a coach's pet in no time. Cassels backchecks; coaches love that crap.

As for the other guys: yeah, no real surprises here. Even they had to know they were Comets players at Canucks camp for the experience.

Finally, a quick word on the cuts we missed from the weekend, of which Hunter Shinkaruk was the biggest name. I know a lot of fans were annoyed that Shinkaruk was bounced so soon on the heels of a nice showing versus the Sharks. But it's clear that Shinkaruk, like Jensen, still needs to find some consistency in his game before he can truly be deemed as NHL-ready as he occasionally looks. Like lots of young prospects, Shinkaruk still disappears from time to time. When he's visible, he's very visible. But until he loses the first half of that sentence, Utica's the right place for him.

In closing, let us pause and briefly appreciate this brave new world, in which the Canucks have real prospects. Enough of them that Nicklas Jensen, once the team's top prospect, is no longer all that special. I know it probably sucks for him. It's great for us.