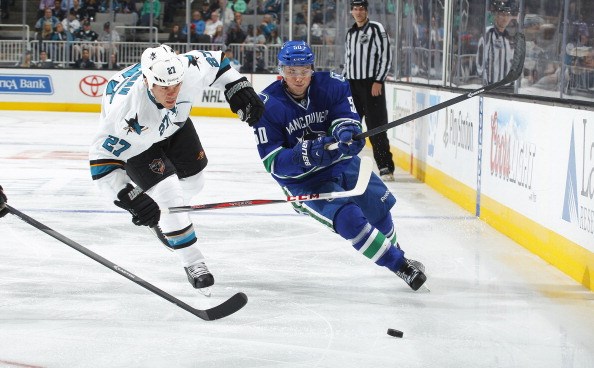 Ben Hutton and Brendan Gaunce have been spotless all pre-season. Well, apart from one play. Hutton was just trying to clear the puck on the penalty kill when he backhanded it blindly up the ice. Instead, he smacked Gaunce right in the nose.

Gaunce left spots all over the ice as he stayed in the play for another 45 seconds or so with blood gushing out of his schnoz, refusing to leave his team with just three penalty killers, even if it was just the pre-season.

It was an impressive display of fortitude, one that must have been impossible to ignore for Jim Benning and his old-school compatriots. But the impressive play of Hutton and Gaunce this pre-season may go a long way towards vindicating his more new-school predecessor: Mike Gillis.

Gaunce has just one point this pre-season, a goal, but it’s his all-around game that has earned him attention and may just get him on the opening night roster in Chris Higgins’ injury-vacated spot on the third line. He started getting that attention right from the Young Stars tournament, where he was one of the Canucks’ best players.

Ben Hutton, meanwhile, has arguably been the Canucks’ best defenceman. He leads the team in scoring in the pre-season with 4 points, all assists, which is all the more remarkable when you consider the Canucks have only scored 7 goals.

Hutton has assisted on more than half of the Canucks’ goals so far this pre-season.

Hutton has been so good that he’s caused Dan Hamhuis to lose his grip on reality. “He reminds me of Chris [Tanev] when he first came in,” he said recently, somehow confusing the puck-rushing, point-producing Hutton for the shot-blocking, first-pass making Tanev.

The comparison isn’t that crazy, of course, as Hutton has shown poise beyond his years and experience, just like Tanev did in his introduction to the NHL. So far, we haven’t seen the defensive deficiencies we all assumed he had when we saw his offensive numbers in the NCAA. For a defenceman jumping straight to the NHL from college hockey, his comfort level has been remarkable.

By virtue of his position, Hutton has a harder road to making the Canucks than Gaunce. Since he’s not waiver eligible and has just 4 games of professional hockey under his belt, it’s far easier to start him in Utica with the Comets than to expose Frank Corrado to waivers or make a hasty trade. But he’s certainly making the decision difficult for Jim Benning.

So what does all of this have to do with Mike Gillis? Simple: both Hutton and Gaunce are Gillis draft picks.

Gillis did a lot of things right as Canucks’ GM, but the biggest knock on him has been his draft record. The Canucks’ prospect cupboard looked awfully bare when Benning took over.

For the most part, those criticisms are completely fair. From his first three years at the draft table, only two players remain in the organization: Joe Cannata and Alex Friesen, though they technically still have the rights to Anton Rodin.

By the end of his time as GM, however, it looked like the changes Gillis made to the scouting staff and process were starting to pay off. His final draft in 2013 netted the Canucks Bo Horvat, Hunter Shinkaruk, Cole Cassels, and Jordan Subban, all among the most exciting prospects (or, in Horvat’s case, players) in the organization.

Now it’s beginning to look like the changes paid off a year earlier. Gaunce and Hutton came from the 2012 draft, when the Canucks had just five picks. If they both succeed in becoming Canucks regulars, that draft immediately becomes the Canucks’ most successful draft in 8 years.

Drafting was the one main weakness of the Gillis regime and, by all appearances, he’d fixed it.