Canucks call up Jack Rathbone from the Utica Comets — is a defenceman out long term? 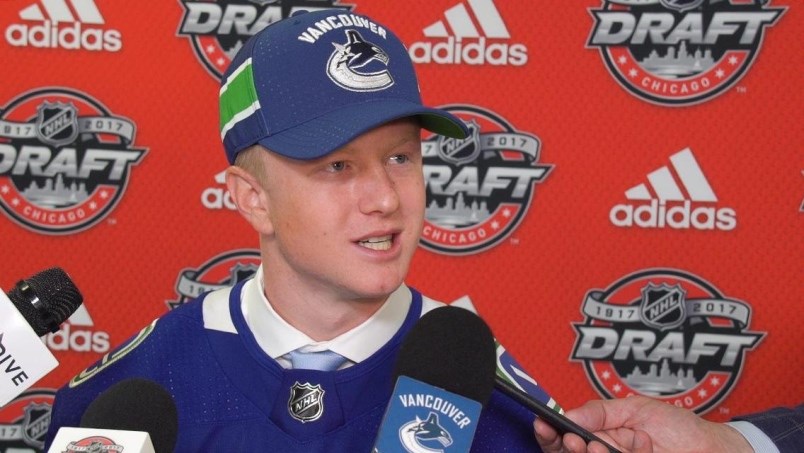 Jack Rathbone was selected by the Vancouver Canucks in the fourth round of the 2017 NHL Entry Draft. photo: Canucks / YouTube

Despite nearly two dozen players going on the NHL's COVID protocol list over the past two weeks, the Vancouver Canucks didn't call anyone up from the Utica Comets. Kole Lind, already in Vancouver while recovering from a broken nose, was added to the team's taxi squad, while the team also recalled Arturs Silovs and Guillaume Brisebois from loans to Canadian AHL teams, but the Comets' roster has remained the same.

According to a report from CHEK TV's Rick Dhaliwal and confirmed by The Athletic's Thomas Drance, the Canucks have called up defenceman Jack Rathbone from the Comets.

Rathbone will need to quarantine for seven days. While that is half the original 14-day requirement, he will still not be available to play for the Canucks until April 23 at the earliest.

The timing of this call-up is both intriguing and worrisome. Because of the need to quarantine, this is unlikely to be a short-term call-up. Instead, Rathbone will likely be with the Canucks through the end of the season.

This suggests that one or more of the Canucks' defencemen might be unable to play out the rest of the season. Notably, Quinn Hughes had difficult COVID-19 symptoms. According to a report by Matt Sekeres on the Sekeres & Price podcast, Hughes required an IV and lost body weight. That doesn't mean he won't be able to return, but it is a cause for concern.

The Canucks have also called up Ashton Sautner and Brogan Rafferty from the taxi squad "under emergency conditions," which again suggests that one or more defencemen are unavailable to play.

Rathbone has been stellar in his rookie season in the AHL, racking up 9 points in 8 games. There has been a strong sense from reports out of Utica that Rathbone doesn't belong in the AHL. In a different season, Rathbone might have already been called up to the Canucks and played games in the NHL.

Rathbone is a superb skater,  passes the puck extremely well, and has a rocket of a shot. He excels on the power play with his ability to get shots through traffic and distribute the puck. The one concern that kept him from making the Canucks out of training camp is the defensive side of the puck but he has been progressing that aspect of his game in Utica.

It remains to be seen whether Rathbone will play for the Canucks or if he's just insurance in case of injuries or COVID-related absences. Given his excellent play in the AHL this season, however, it would seem wasteful to call him up and not get him on the ice.