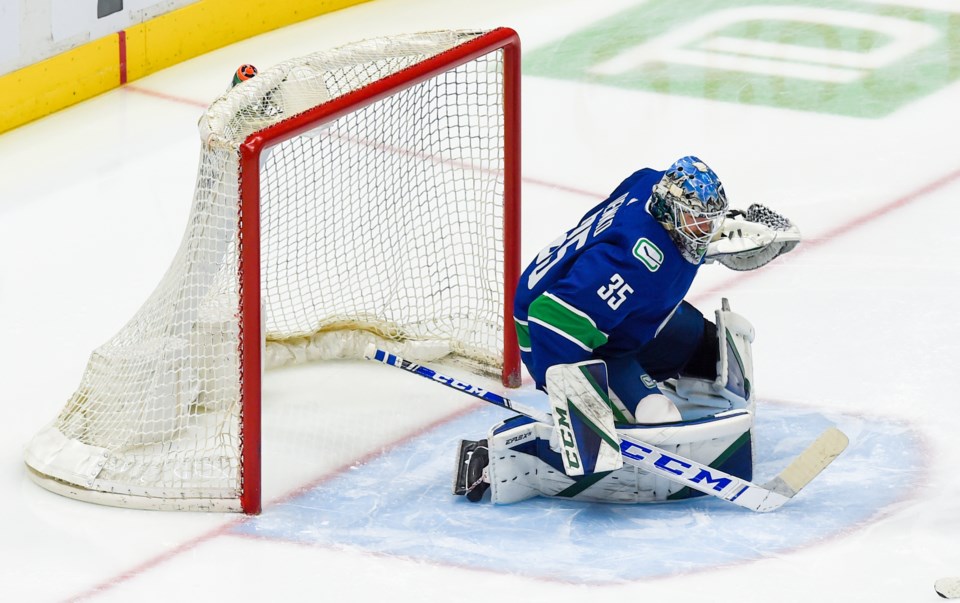 According to multiple reports, the Vancouver Canucks have signed goaltender Thatcher Demko to a five-year, $25 million contract extension. Bob Kronbauer / Vancouver is Awesome

The Vancouver Canucks know how vital good goaltending can be. For an example, they can just look at their current season.

According to analytics site HockeyViz, the Canucks have a 5% chance of making the playoffs this season. Over the past month, however, the Canucks have actually been the second best team in the North Division, with their 8-4-1 record in March second only to the Montreal Canadiens in points percentage.

The primary architect of the Canucks’ excellent March run has been Thatcher Demko, whose .937 save percentage leads all goaltenders who played at least 10 games in March. Demko stole games all month long — all of his wins came in games where he allowed two or fewer goals.

Evidently, it was enough to convince the Canucks that Demko will be their number one goaltender for the foreseeable future. According to multiple reports, the Caanucks have locked Demko up to a five-year deal with an average annual value of $5 million.

The contract is a calculated risk. It not only provides cost certainty at the goaltending position for the next five seasons, but also buys up three UFA years for Demko, where he could have potentially tested the free agent market in the future and negotiated a larger contract. If Demko can continue to play at a high level, then $5 million is a reasonable cap hit, though not excessively cheap — it makes him tied for 13th in the NHL for goaltender contracts.

It is, however, a risk. Demko still only has 59 career starts in the NHL and goaltender performance is notoriously hard to predict.

Just as this season has shown the importance of goaltending for the Canucks, it also shows the volatility of the position. As good as Demko has been in March, he struggled to the same degree in February, with an .888 save percentage that ranked as one of the worst in the NHL over that span of time.

Demko has the potential to be a workhorse number one, the type of goaltender that can play 60+ games in a season and give his team a chance to win every single night. This season, he’s given the team in front of him plenty of confidence in his ability to stop the puck.

“He has a high compete level, he wants to win badly, and he wants to be a big part of the team,” said J.T. Miller after Wednesday’s morning skate. “We love playing in front of him and we feel very comfortable. He’s having a great season and he’s keeping us in a lot of games, so we’re obviously super-pumped to have him on our side.”

Advanced analytics, whether it’s publicly-available models like Goals Saved Above Expected or proprietary models like those from Clear Sight Analytics, suggest that Demko hasn’t just been good this season, but legitimately one of the best goaltenders in the league.

The question is whether he can continue along that path in the years to come.

The volatility of long-term goaltending contracts

For instance, Frederik Andersen also signed a five-year, $25 million contract as an RFA back in 2016, albeit with a longer track record than Demko. He was coming off a season with a .919 save percentage with the Anaheim Ducks, similar to Demko’s .917 save percentage this season.

Andersen kept up his high level of play through the first three years of his contract, but fell off last season with a .909 save percentage, then has an ugly .897 save percentage this season, the final year of his deal. His slumping performance comes at a terrible time for the Toronto Maple Leafs, as they’re looking to go on a long playoff run and contend for the Stanley Cup.

Or, take Carey Price, the highest-paid goaltender in the NHL at $10.5 million per season. He's in the third year of an eight-year contract and had a .909 save percentage last year and a .906 save percentage this year. There's a legitimate risk that he loses the net to Jake Allen and his .920 save percentage this season and he still has five years left on his contract.

You could also look at Jacob Markstrom this season with the Calgary Flames. Canucks fans are well aware of how vital he was for the Canucks but his game has fallen off significantly, with a .902 save percentage in the first season of a six-year, $36 million contract.

All that is to say that past success is no guarantor of future performance when it comes to goaltending.

When goaltenders like Andersen, Price, or Markstrom slump, there could be many causes, such as a nagging injury, a mental hurdle, or a change in goalie coach. The latter is a potential concern for Demko.

The Canucks have yet to re-sign goaltending coach Ian Clark, who helped Markstrom get to the next level with the Canucks and has guided Demko into the starter’s role this season. Away from Clark, Markstrom’s play has slipped, similar to how Sergei Bobrovsky’s play slipped when he left Clark and the Columbus Blue Jackets to join the Florida Panthers.

With Demko re-signed to a long-term deal, the next priority would be to ensure that the goaltending coach that helped him excel also gets re-signed.

The Canucks desperately need one (or both) of their goaltenders to start stealing wins
Feb 16, 2021 5:34 PM
Comments