Loui Eriksson is on waivers, but he may still play for the Canucks this season 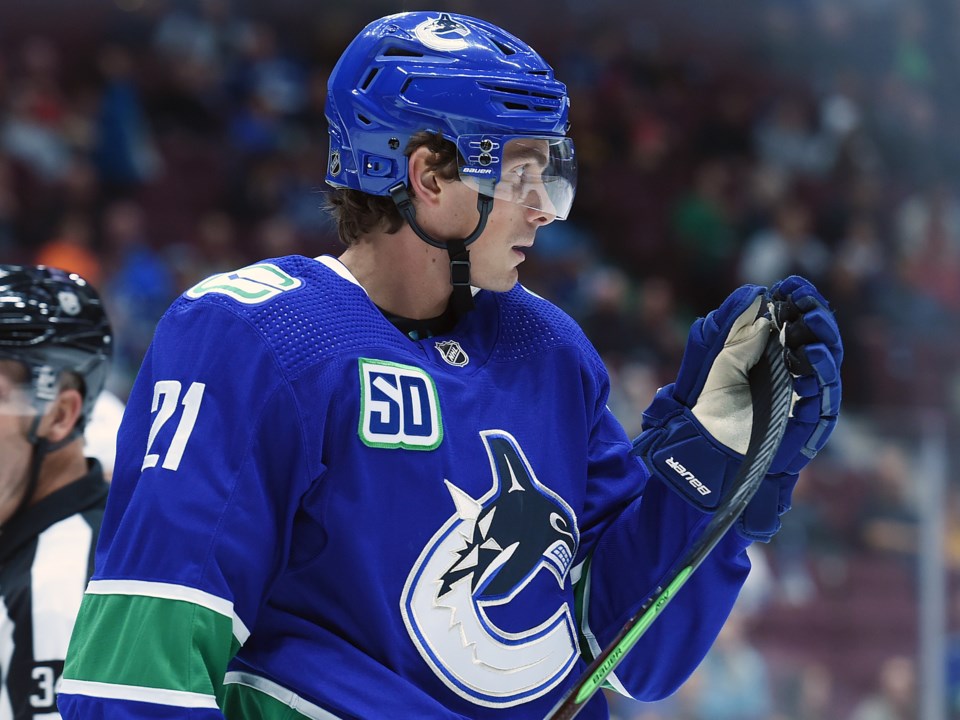 Loui Eriksson has been placed on waivers by the Vancouver Canucks. photo: Dan Toulgoet / Glacier Media

The Canucks reduced their training camp roster by six players on Monday, specifically the six players that needed to go on waivers to be sent down to the AHL or to the Canucks’ taxi squad.

There was one very notable, six-million-dollar name among them: Loui Eriksson.

Teams needed to assign players to the AHL by Tuesday with the season starting on Wednesday. That meant Monday was the deadline for putting players on waivers and 139 players hit the waiver wire en masse.

Along with Eriksson, the Canucks waived veteran winger Sven Baertschi and a handful of younger players: forwards Justin Bailey and Tyler Graovac and defencemen Guillaume Brisebois and Ashton Sautner.

That left a slightly different Canucks squad at practice on Monday morning. While the lines and pairings remained the same as previous practices, albeit with the addition of Travis Hamonic with Quinn Hughes, Eriksson was not one of the extra skaters. His place was taken instead by rookie Marc Michaelis.

What remains to be seen is whether all of the waived players will be assigned to the Utica Comets or if some will remain in Vancouver on the taxi squad. There’s even a possibility that Eriksson momentarily remains on the roster to start the season for cap-related reasons in order to maximize the benefit of Micheal Ferland going on Long-Term Injured Reserve (LTIR) — it’s a complicated subject, but the closer a team is to the salary cap when a player goes on LTIR, the more cap relief they get.

"We expected him to be a consistent 20-goal scorer."

Going on waivers has been a long-time coming for Eriksson, who the Canucks have tried to find a suitor on the trade market multiple times in the past.

Eriksson is tied with Alex Edler and Tyler Myers as the highest-paid player on the Canucks roster with a $6 million cap hit on his six-year deal that expires in 2022. When Canucks GM Jim Benning signed Eriksson back in 2016, he was coming off a 30-goal season with the Boston Bruins. He’s scored 38 goals total for the Canucks over the last four seasons.

“When we signed him, we expected him to be a consistent 20-goal scorer,” said Benning last year. “He hasn’t done that. That part, that’s been disappointing.”

Eriksson, who turned 31 shortly after he was signed, had experience playing with Daniel and Henrik Sedin in international competition for Sweden, which is part of what made him an attractive target in free agency, but any hopes that he might revitalize the Sedins as they finished their careers were dashed. Instead, Eriksson provided most of his value on the defensive end, particularly on the penalty kill.

That’s not enough to justify a $6 million cap hit, and even his value as a bottom-six forward diminished over the years and he found himself a healthy scratch a few times last season, including in the playoffs.

If Eriksson has played his last game in the NHL, he’ll come 32 games short of 1000 regular season games in the NHL, which would be a shame. Despite his struggles with the Canucks, he’s had a very successful NHL career.

Of course, Eriksson’s time as a Vancouver Canuck might not be over just yet. There’s a distinct possibility he’ll be assigned to their taxi squad, making him available for a quick call-up in case of injuries or positive COVID-19 tests.

As a reminder, the taxi squad is a new addition this season as a special consideration during the COVID-19 pandemic. Because of the difficulties inherent in quickly calling up players with travel restrictions, particularly the three Canadian teams with American AHL affiliates, every team has a taxi squad with 4-6 players that are considered “in the AHL” for the purposes of the salary cap but will practice with the NHL team.

The taxi squad got its name from the Cleveland Browns in the 1940s. Browns owner Arthur McBride also owned a taxi company. When players didn’t make the Browns roster, but the team wanted to keep them around to potentially play in the future, McBride would put them on the payroll of his taxi company instead. Thus, the taxi squad was born.

Fortunately for the Canucks players, they won’t have to start memorizing the streets of Vancouver — putting them in literal taxis would likely violate the NHL’s COVID-19 protocols — and Canucks owner Francesco Aquilini has a distinct preference for ridesharing company Lyft.

As a reliable veteran who knows the Canucks systems, it would make sense for Eriksson to be on the taxi squad. He’s a known quantity for head coach Travis Green, easy to slot in on the bottom-six or alongside captain Bo Horvat and Tanner Pearson in a match-up role in the top-six. Fans may yet see Eriksson in a Canucks jersey this season.

A confident Olli Juolevi is finally ready for his rookie season with the Canucks
Jan 7, 2021 1:38 PM