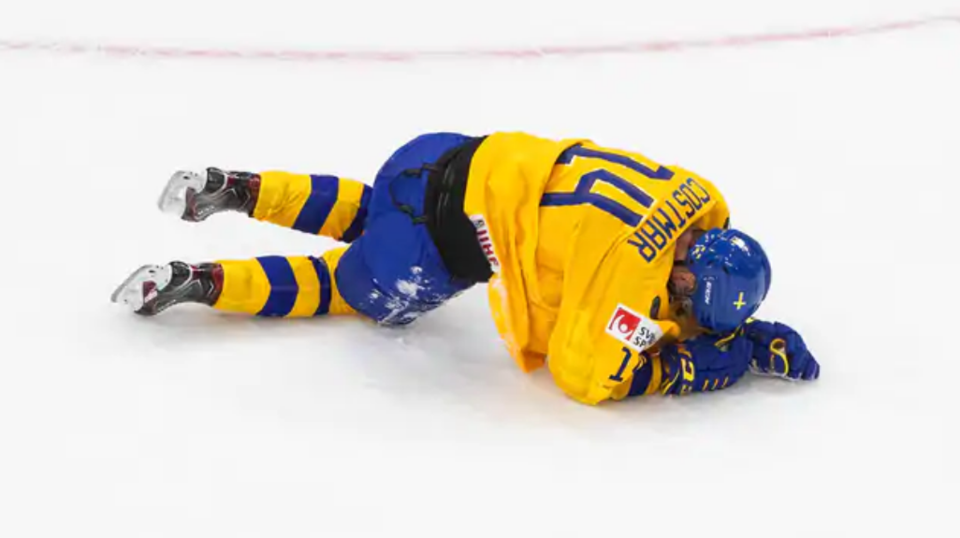 Arvid Costmar on the ice after a slew foot by Mikhail Abramov at the 2021 World Junior Championship.Jason Franzon / CP

Arvid Costmar's World Junior tournament is over. After two losses to end the preliminary round, Sweden succumbed to Finland in the quarterfinals thanks to a last-minute goal by Roni Hirvonen to give them the 3-2 win.

It was a heartbreaking loss for Sweden, one that Costmar, whose emotion and passion was key for his team all tournament, seemed to take particularly hard. After the final horn, Costmar could only hang his head against the boards and was clearly upset afterwards.

Costmar did get one consolation prize. He was chosen by his coaches as one of Sweden's top-three players for the tournament, along with defencemen Victor Soderstrom and Tobias Bjornfot. The watch he received doesn't match the medal he hoped for, but it's still an impressive feat for a seventh-round pick in his first and only World Juniors.

The top three players for Sweden could be considered odd choices, overlooking top-end talent like Alexander Holtz and Lucas Raymond, but Costmar impressed with his multi-dimensional game. He scored two goals, played both sides of special teams, agitated opponents, and took key faceoffs. He was a pain in the neck to play against, something he acknowledged to HockeyNews.se heading into the game against Finland.

"If you irritate an opponent, it gives you an edge," said Costmar. "I try not to take any crap, but I stand up for myself and the team."

He was at his agitating best against fellow Canucks prospect Vasily Podkolzin and Russia during the preliminary round, where he was one of the most noticeable players on the ice. Against Finland, however, he had a quieter game.

That wasn't entirely Costmar's fault. After Sweden took a 2-0 lead in the first period, Finland seemed to completely take over the game, giving Sweden little room to maneuver. Costmar still battled hard, but he wasn't able to find the same amount of open ice that he had previously in the tournament and struggled to create chances.

Finland got one goal back in the second period, then had another called back on an offside review, but Sweden couldn't take advantage of the fortunate break. Finland kept pushing and tied the game with nine minutes left. Then, with just 25 seconds remaining, Finland stunned the Swedes with the go-ahead goal.

Costmar took the subsequent faceoff, winning it for Sweden as they pulled the goaltender and went 6-on-5. He and his teammates couldn't gain the offensive zone, however, icing the puck. Again, Costmar was called upon to win a key faceoff and did so, but Sweden couldn't escape the defensive zone as time expired.

While the tournament ended in disappointment for Costmar, he showed another side to his game that should get Canucks fans excited to see him eventually try to work his way into the Canucks lineup. He still has a long way to go — he needs to work on his acceleration so he can get to the puck in quick bursts and needs more core strength in his puck battles — but there are a lot of positive aspects to his game that could lead to an NHL future for Costmar.

That leaves just one Canucks prospect remaining in the tournament.

in the first quarterfinal match of the day, Vasily Podkolzin and Russia took on Germany led by Tim Stützle. After an undermanned German squad got crushed 16-2 earlier in the tournament, they bounced back in a big way with wins over Slovakia and Switzerland to secure the first-ever spot for Germany in the World Junior quarterfinals.

They made the most of their historic moment, giving Russia a legitimate scare. Russia took a 1-0 lead in the first period on a shorthanded goal by Vasili Ponomaryov, then extended the lead to 2-0 on a second-period goal by Danil Bashkarov. Germany refused to go quietly, however, and battled back with a goal from Florian Elias, giving him 4 goals and 9 points in 5 games in the tournament.

That's as close as Germany would come, however, as Russia held on for the one-goal victory despite some nervous moments.

Despite not hitting the scoresheet, Podkolzin was one of Russia's most impactful players. His puck pursuit was a joy to watch, as he created turnovers in every zone. With the puck, he made smart choices to keep possession and set up some great scoring chances.

His most important play came in the defensive zone in the final minute. With Germany controlling the puck off a faceoff in the Russian zone, Podkolzin attacked the puck carrier along the boards and, with a strong stick, poked the puck up and out of the zone with about 30 seconds left. That one play essentially ended the game, as Germany never quite recovered.

As per usual, there were a couple of examples of Podkolzin setting up great scoring chances that his teammates couldn't capitalize on. In the second period, he stole the puck in the offensive zone, leading to a shot from the point. On the rebound, he threaded a puck through traffic to Rodion Amirov at the backdoor, who couldn't get all of the puck and missed the net.

Later in the third period, Podkolzin made a nifty move to keep the puck in at the blue line, then moved down behind the net and set up a chance for Marat Khusnutdinov, but the centre's shot went off a stick and over the net.

Podkolzin has 4 points in 5 games at the tournament so far, but it feels like he could have another half-dozen assists with the chances he's set up for his teammates.

Overall, it was another strong, unselfish game from Podkolzin. Almost too unselfish. On several shifts, he and his linemates pinned Germany in their own zone, with Podkolzin controlling the puck on the cycle. Instead of staying on the ice and taking advantage of the opportunity, Podkolzin would always keep the possession alive and then go off for a change, bringing on fresh legs.

On the one hand, that's not a bad idea. Fresh legs against tired opponents can lead to good chances, but when you're one of the best players on your team, sometimes the chances you could create against those tired opponents trump what a fresh, less-talented line could produce.

Podkolzin leads his team with 20 shots on goal, and that's while playing some of the most unselfish hockey you can imagine. He arguably could be having an even greater impact for Russia if he was a little more selfish at times.

Vasily Podkolzin's 3-point first period carries Russia over Austria, but what is World Junior production worth?
Dec 30, 2020 11:41 AM