Rafferty, who the Canucks signed out of the NCAA last April, has been lights out in the AHL this season
Jan 15, 2020 11:46 AM By: Daniel Wagner 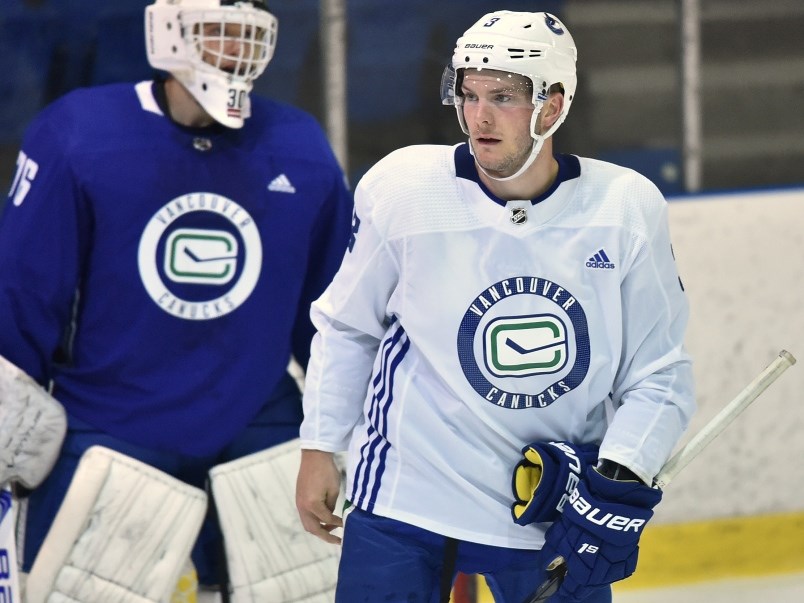 The Vancouver Canucks’ defence has been remarkably healthy this season. Even when they have had injuries, they haven’t had multiple injuries pile up on top of each other, so the Canucks haven’t needed to dig too deeply into their defensive depth.

Only Ashton Sautner has played a single minute beyond the team’s seven defencemen that started the season on the Canucks roster, and he played less than three minutes before suffering an injury.

Overall, the lack of injuries has been a big positive for the Canucks, who have had to deal with an abundance of injuries on the blueline in recent seasons. The Canucks had 14 defencemen play at least one game last season; none of them played a full season and just Troy Stecher played more than 70 games.

It’s less positive, however, for Brogan Rafferty, who was one of those 14 defencemen last season. Rafferty, who the Canucks signed out of the NCAA last April, has been lights out in the AHL this season but hasn’t seen a sniff of NHL action because the right side of the Canucks’ defence has stubbornly stayed healthy.

Rafferty has made the most of his time in the AHL: he currently leads all AHL defencemen in scoring with 37 points in 40 games and is just one point behind centre Josh Norris in the rookie scoring race. It’s entirely possible that between Rafferty and Quinn Hughes, the Canucks could have a defenceman win the rookie scoring race in both the AHL and NHL this season.

On Wednesday against the Hartford Wolf Pack, Rafferty added to his impressive scoring with a goal and three assists. The game itself wasn’t ideal for the Comets. They took a 5-0 lead in the first period, then it took a turn, as the Wolf Pack out-shot the Comets 16-1 in the second period, then tied up the game 5-5 in the third, forcing the game to overtime, where Lukas Jasek finished a rebound from a Rafferty shot to rescue the win.

But the result of the game isn’t the point. The point is OH MY GOODNESS, YOU HAVE TO SEE THIS RAFFERTY GOAL.
Sorry, I’ve been holding in my excitement over this goal for over seven paragraphs now and I couldn’t hold it back any longer. This goal, you guys, is so great. Check it out.

It’s a great read by Rafferty, as he identifies that the Wolf Pack have just one man back on the failed zone entry on the power play. Olli Juolevi intercepted the pass, but his clearing attempt hit a leg and bounced cross-ice, where Rafferty jumped up to take on 20-year-old New York Rangers prospect Joey Keane.

Keane, a rookie like Rafferty, clearly did not expect a fellow defenceman to pull off a between-the-legs move, particularly with Vinni Lettieri hounding him on the backcheck. So, when Rafferty cuts to the inside, Keane is left flat-footed and flummoxed, as Rafferty moves the puck back to his forehand and slips it past goaltender Adam Huska.

That’s a ridiculously-skilled move by Rafferty. You have to imagine, if any of Tanev, Myers, or Stecher get injured, Rafferty will get the call up to the Canucks to prove himself at the NHL level. Until then, he can just keep owning the AHL.