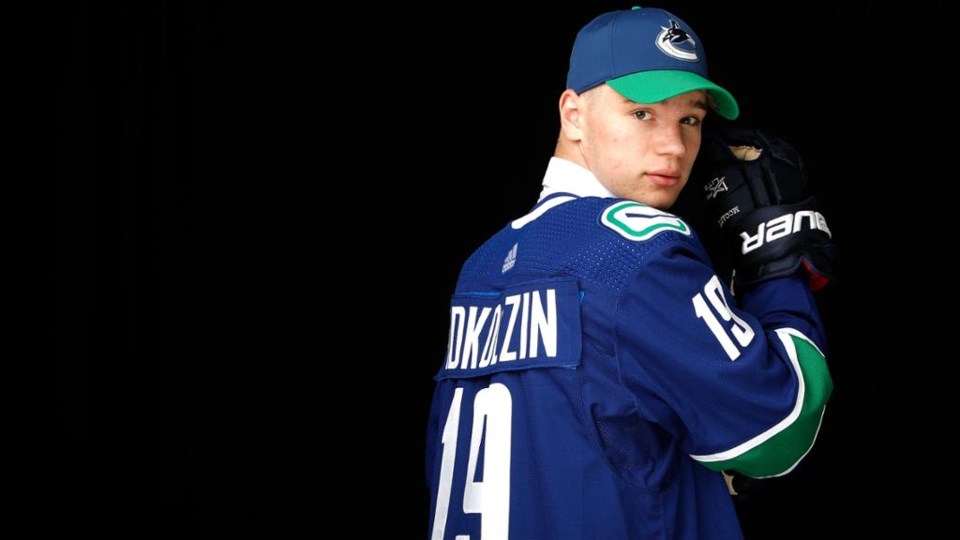 Vasily Podkolzin at the 2019 NHL Entry Draft, where he was selected 10th overall by the Vancouver Canucks.Canucks / NHL

Vasily Podkolzin was just starting to pick up steam in the KHL, but a hit to the head on Tuesday may derail his season.

With just five games remaining in the regular season for SKA Saint Petersburg, Podkolzin was on a roll. He had three goals and five points in his last seven games and was getting some serious ice time, topping out at 18:31 in a game against Spartak Moscow.

It’s been a nice change of pace from earlier in the season, when he was languishing on the fourth line and struggling to pick up any points. After many overtures to get Podkolzin to stay in Russia, SKA appears to have accepted that he’ll be leaving for the NHL in a couple of months and are trying to get as much out of him as they can while he’s still in Saint Petersburg.

After a break from the KHL to play for Russia at the Beijer Hockey Games in Sweden — he was an alternate captain for Russia and picked up three points in three games — Podkolzin returned to the SKA lineup on Tuesday to face Spartak.

It might prove to be the last game he plays for SKA, as he took a heavy hit to the head from former St. Louis Blues and Philadelphia Flyers forward Jori Lehtera.

Deep in his own zone, Podkolzin sent the puck behind his own net to relieve pressure, then turned up the boards, running square into the shoulder of Lehtera. The collision appeared to be unintentional, as Lehtera’s eyes followed the puck. The Finnish forward immediately checked to see if he was all right and skated to check on him as he left the ice.

Podkolzin was extremely wobbly on his skates after the hit and had to be helped off the ice by his teammates, then supported by staff down the tunnel. According to CanucksArmy’s Chris Faber, he had to be practically dragged to the locker room.

SKA head coach Valeri Bragin had no update on Podkolzin’s status after the game.

“It's hard to say right now, we'll see tomorrow. When he comes in, we'll see his condition,” said Bragin.

From the hit and his reaction, the likely diagnosis is a concussion for Podkolzin. Concussions can be complicated, and it will be important for Podkolzin to take as much time off as he needs to fully recover.

The injury comes at a time when the 19-year-old Podkolzin was finally finding his offensive touch, whether with SKA or the Russian national team. He scored a fantastic goal against the Czech Republic at the Beijer Hockey Games on the weekend, picking off a puck at the blue line and deking out the goaltender in tight.

Now he might not have the opportunity to add to his 11 points in 33 games with SKA this season. Indeed, Canucks fans might hope that he doesn’t play another game with SKA, if only to ensure that he gets as much recovery time as possible before coming to Vancouver.

Vasily Podkolzin apologizes on Instagram for Russia's performance at the 2021 World Junior Championship
Jan 6, 2021 9:59 AM

Vasily Podkolzin's 3-point first period carries Russia over Austria, but what is World Junior production worth?
Dec 30, 2020 11:41 AM
Comments