Braden Holtby is coming off an ugly season, but has been one of the best goaltenders in the NHL in the past.

The Vancouver Canucks made re-signing Jacob Markstrom a priority, but they couldn't get a deal done before free agency opened, at which point multiple teams swooped in to lure the Canucks' MVP away.

That meant the Canucks needed to move in another direction. They had lots of options on the free agent market, along with a few trade possibilities. Just over an hour into free agency, they landed one of the biggest names available: Braden Holtby.

The Canucks signed Holtby to a two-year, $8.6 million deal, so his cap hit will be $4.3 million. That's a step up in salary from Jacob Markstrom last year, who had a cap hit of $3.67 million. Of course, Markstrom was looking for a significant raise.

Holtby has been the starting goaltender in Washington for seven seasons and backstopped the Capitals to a Stanley Cup in 2018. A couple seasons before that, Holtby won the Vezina as the best goaltender in the NHL with a league-leading 48 wins and a .922 save percentage.

Holtby certainly has the pedigree as one of the NHL's top goaltenders, but the past few seasons have not gone as well.

Last season, in particular, was ugly for Holtby. He had an .897 save percentage last season, fifth-worst among NHL goaltenders with at least 20 starts. At 5-on-5, his goals saved above average (GSAA) was -14.70 — as in, he allowed nearly 15 more goals than an average NHL goaltender facing the same shots — which was third-worst in the NHL.

"Last year was a bit of a struggle at times, it didn't go as planned," said Holtby on a Zoom call with the media. "After things shut down, it was kind of a blessing in disguise that myself and Scott Murray, our goalie coach, were able to really break things down and find some different ways to train. When we came back, I felt as good as I have been in a long time."

He especially struggled on shots from around the net, the slot, and below the faceoff dots, the most dangerous areas of the ice. Certainly, every goaltender has trouble with those types of shots — those are prime scoring chance areas — but Holtby was significantly below average. 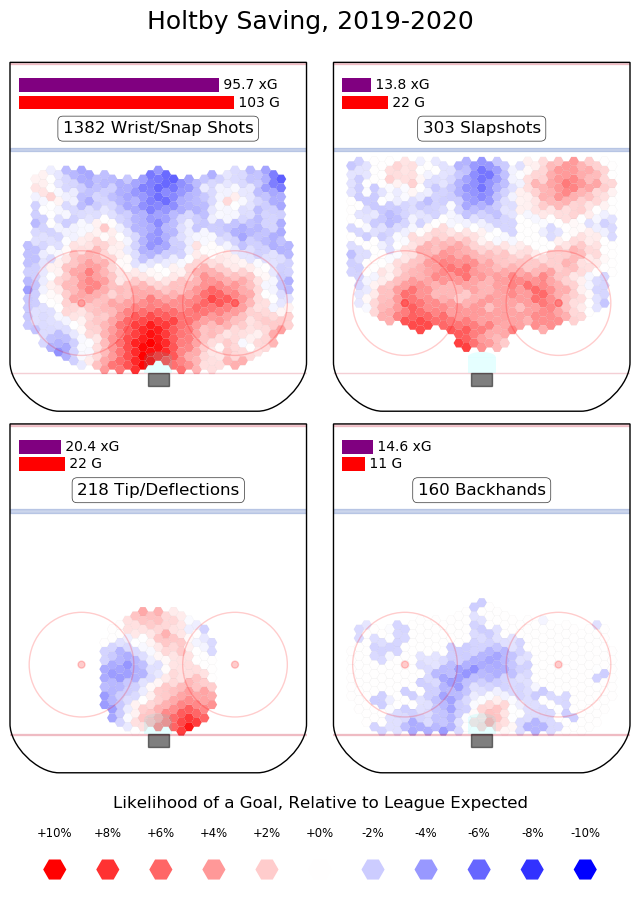 That's worrying, because the Canucks gave up a lot of shots from those areas this past season. 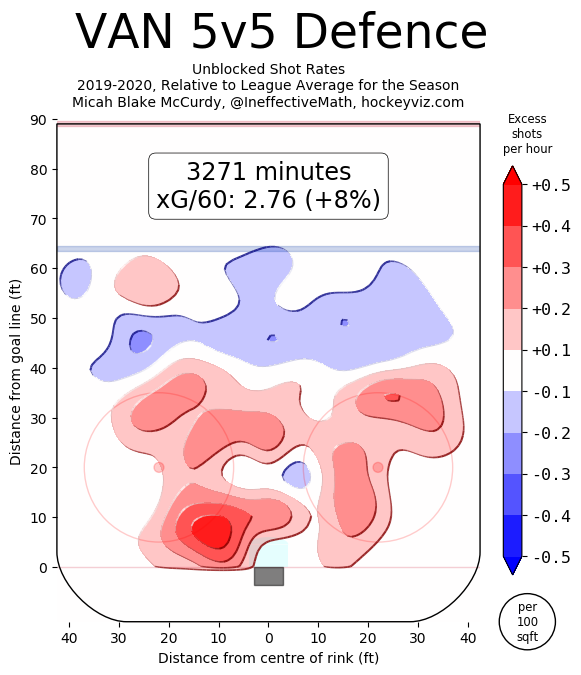 Considering Holtby is 31 years old, it's worth asking if this is a decline in his play or just a one-year blip.

In 2018-19, Holtby was right around league average, but the year before that he was also below average. That's three-straight years as either an average or below-average goaltender. Before those three years, Holtby was consistently among the best goaltenders in the league, but there is some serious cause for concern.

Holtby is also a character guy, a player that has spoken out in support of Black Lives Matter, supported LGBTQ causes, and spoken at the Human Rights Campaign national dinner. He also hasn't turned a blind eye to racism in Canada, speaking up about racism against indigenous people.

"That's just the way our family views the world," said Holtby. "We believe in equality and people being treated the right way, that's just the way we live our lives... We just want to create the best world for our children and future generations that we can."

In terms of leadership and mentorship, Holtby seems like an ideal fit for the Canucks room and should work well with Demko. The Canucks will need both goaltenders next season.

"It's going to be condensed schedule, it's going to be a grind, and I think you're gonna have to have two guys that are going to win games for you," said Holtby. "Everything I've heard speaks to how much talent [Demko] has and how good of a goaltender he is and that's exciting. You want to want to be able to push each other... You know, put some young blood back in me too, it's always fun to work with young guys. They see it a different way and you can learn a lot from them."

A two-year deal makes a lot of sense for Vancouver, as it means he can be exposed in the Seattle Kraken expansion draft. All teams have to expose a goaltender and this will allow the Canucks to protect Demko. Depending on who's available in the expansion draft, it's hard to imagine the Kraken passing up a chance to add a big name like Holtbym particularly with his character. It's similar to the Vegas Golden Knights taking Marc-Andre Fleury.

The question is whether Holtby can still play at a high level. Markstrom's excellence papered over a lot of holes in the Canucks' defensive game; can a tandem of Demko and Holtby do the same next season?

9 options for the Canucks’ goaltending next season other than Jacob Markstrom
Oct 5, 2020 11:53 AM
Comments