The Canucks clear some cap space while simultaneously adding a draft pick.

A day before the deadline, the Vancouver Canucks have finally made a trade. It’s the first trade of Patrik Allvin’s career as general manager and it’s a good one.

Not only did the Canucks dump a bad contract, clear cap space, and add a draft pick — they did all of those things in one move.

According to CHEK TV’s Rick Dhaliwal, the Senators have been pursuing Hamonic for some time. Senators assistant coach Jack Capuano was Hamonic’s coach with the New York Islanders for seven seasons and is evidently a fan.

That was five years ago, however, and the 31-year-old Hamonic hasn’t been the same player for the Canucks, at least when he’s been in the lineup.

It’s been a strange season for Hamonic, who sat out the start of the season due to “personal matters,” which almost certainly were related to his decision to delay getting vaccinated. Even when he finally joined the Canucks, he was sent down to the Abbotsford Canucks in the AHL during a road trip to the U.S. because he was not yet considered fully vaccinated and couldn’t travel across the border.

Hamonic then missed a significant amount of time with a lower-body injury, sitting out from mid-December to mid-February.

Since then, however, Hamonic has been a consistent presence in the Canucks lineup, typically playing on the third pairing. He’s been a bit of a mixed bag — he’s put up some points thanks to his ability to get shots through traffic but he’s also made some baffling defensive decisions and particularly struggled on the penalty kill.

In total, Hamonic has played 24 games for the Canucks this season and picked up 7 points, while giving up the highest rate of shot attempts and expected goals against on the team, according to Natural Stat Trick.

The HockeyViz heat maps of the Canucks’ defensive results with and without Hamonic are pretty stark, with the Canucks giving up a massive number of shots from the middle when Hamonic is on the ice at 5-on-5. 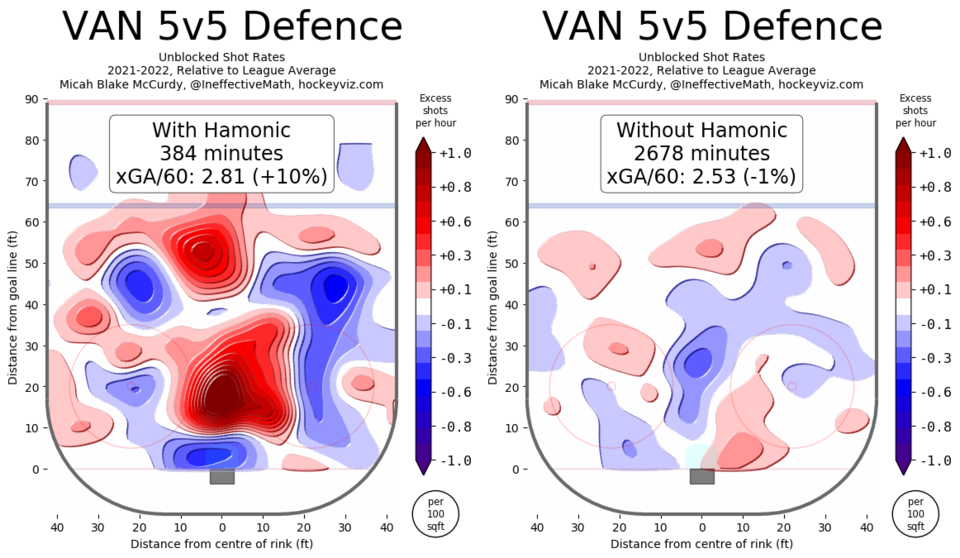 Moving Hamonic and getting out from under his $3 million cap hit for next season, then, is massive for the Canucks. It frees up some cap space, allowing the Canucks to find a younger, cheaper, and, in all likelihood, better option for the third pairing.

Getting a third-round pick back from the Senators for what is essentially a cap dump is shocking. The Canucks did not retain any salary in the deal.

Some have theorized that the Senators want to ensure that they’ll reach the salary cap floor but they have multiple free agents in need of new contracts and shouldn’t have had much trouble getting to the cap floor without spending a third-round pick. They wanted Hamonic.

Perhaps Hamonic will thrive in a different environment than the Canucks; it wouldn’t be the first time. But, for now, this looks like a big win for the Canucks.