Between buyouts and performance bonuses, Canucks will have twice the league average in dead money on their books.

Not all NHL teams will be spending to that cap, of course — some by choice, as they have internal budget limits, and some because they have dead money on the books.

Thanks to a combination of buyouts and carried-over performance bonuses, the Vancouver Canucks are among the latter. But they’re far from the only team with dead money.

In fact, according to CapFriendly, just six of the NHL’s 32 teams have no dead money on the books for the 2022-23 season. 26 teams will have a cap hit for players not on their roster or performance bonuses carried over from the previous season.

The various types of "dead money" in the NHL

This dead money can take various forms. Dead cap refers to a cap hit for a player or players that are not on the team. This can mean buyouts, retained salary from a trade, recapture penalties, or termination penalties. There are examples of all four of those on the books of NHL teams next season.

The biggest source of dead money is buyouts. $2.4 million of the Canucks’ dead money will come from buyouts for Braden Holtby and Jake Virtanen, for example.

Retained salary is the next biggest source of dead money. The Edmonton Oilers, for instance, will still be paying $750,000 of Milan Lucic’s salary as part of his trade to the Calgary Flames. Yes, that means the Oilers are currently paying Lucic $750,000 to play against them in the playoffs.

Finally, there are termination penalties, which are paid out when a team terminates a contract. There’s just one of those currently on the books in the NHL: the Los Angeles Kings are still paying out Mike Richards’ contract after terminating his deal for “material breach” after he was charged with illegal possession of a controlled substance. The cap hit for Richards’ penalty will be $900,000 next season.

In addition to those sources of dead cap, there are performance bonuses that can carry over from the previous season if the team does not have the cap space available to absorb those bonuses.

Performance bonuses can only be given to three types of players. Those on entry-level contracts, a player over 35 who signs a one-year contract, and a player coming off a long-term injury.

There are still some additional bonuses that could come into play for some teams. For instance, a player on an entry-level contract that is named to the All-Rookie Team at the end of the season might earn an additional Schedule A performance bonus of $212,500. But, for the most part, these bonuses have already been locked in.

As of right now, Canucks will have the highest bonus overage in the NHL thanks to Jaroslav Halak hitting his $1.25 million bonus for starting 10 games.

That could be matched by the St. Louis Blues, however, if they manage to upset the Colorado Avalanche in the second round of the playoffs. Tyler Bozak, signed to a 35+ contract, has already hit performance bonuses totaling $1.1 million that will carry over to next season and will get an additional $150,000 for a total of $1.25 million if the Blues get out of the second round.

The Montreal Canadiens are pretty close too, with a total of $1,132,500 in bonuses carrying over to next season thanks to players on entry-level contracts: Cole Caufield, Nick Suzuki, and Alexander Romanov.

Four teams will have more dead money than the Canucks

Four other teams will have even more dead money on their salary cap next season, including two teams in Round 2 of the Stanley Cup Playoffs. 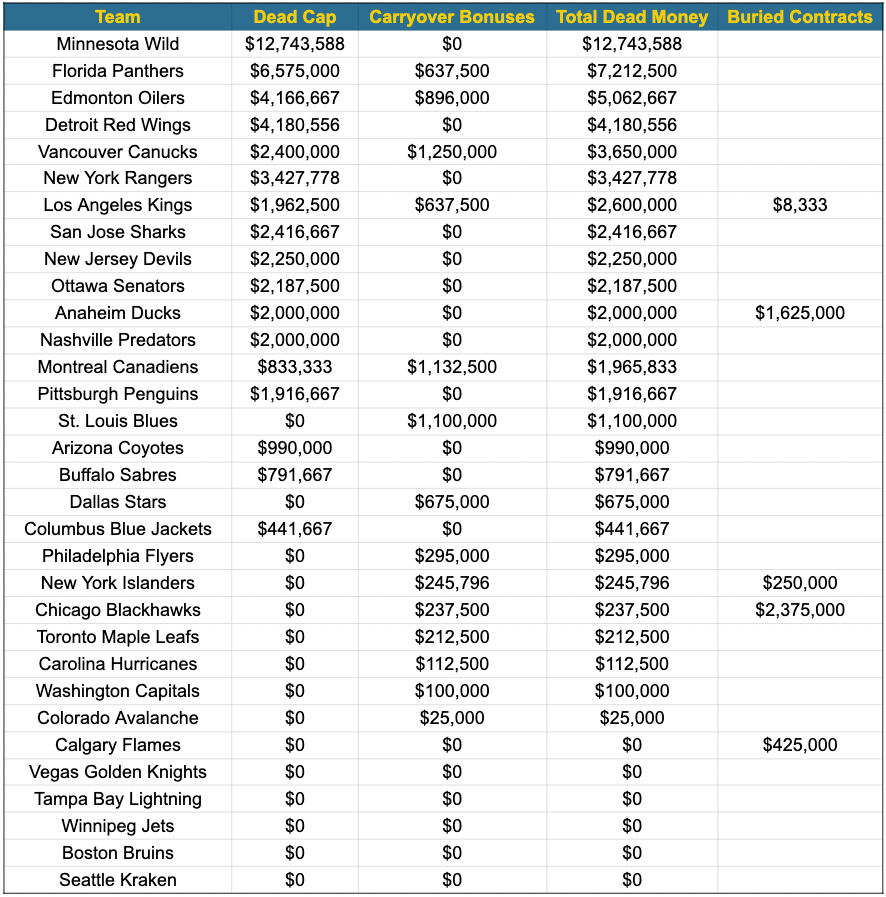 All data via CapFriendly.

The Minnesota Wild will have the most dead money by far and it’s all from just two players: Zach Parise and Ryan Suter. The two veterans signed identical 13-year deals worth $98 million each back in 2012, then received identical buyouts in 2021 that will last through 2029.

Both Parise and Suter will cost the Wild $6,371,794 against the cap next season for a total of $12,743,588. The Wild finished second in the Western Conference this past season but the dead money on the books will make it tough for the team to take a step forward after a disappointing first-round exit.

The Florida Panthers have the next-highest amount of dead money, largely thanks to a very expensive buyout for Keith Yandle, which hits its highest cap hit next season at $5,391,667. Add in a buyout for Scott Darling for a little over a million and some performance bonuses for Anton Ludell and Spencer Knight, and it comes out to $7,212,500 in dead money next season.

The Panthers won the Presidents’ Trophy this past season — imagine if they were able to add a $7 million player in free agency.

Next up is the Edmonton Oilers, who have a fun combination of retained salary, buyouts, and bonus overages.

As mentioned above, the Oilers are paying Milan Lucic $750,000 per year to play for their Albertan rivals but they also have the buyout on the books for the player they traded to the Flames to get Lucic: James Neal.

Neal will cost the Oilers $1,916,667 against the cap next season. They’ll also have Andrej Sekera’s $1.5 million buyout and performance bonuses for Evan Bouchard, bringing them to a total of $5,062,667 — which happens to be slightly more than the cap hit of Juuse Saros, Linus Ullmark, Robin Lehner, Semyon Varlamov, and Thatcher Demko. Just saying.

The last team with more dead money than the Canucks is the Detroit Red Wings, who were well under the salary cap this past season as they continue their rebuild. Between buyouts for Justin Abdelkader and Frans Nielsen and retained salary for Richard Panik, the Red Wings have a total of $4,180,556 in dead money.

Speaking of Panik, he plays into the one last category of dead money: buried contracts.

In order to avoid having teams stash NHL players on big contracts in the AHL, there is a limit on how much cap relief a team gets when a player is sent down to the minors. The maximum cap relieft a team can get is $1.125 million for this season and next season.

Any player with a cap hit under $1.125 million doesn’t count against the cap at all when they’re in the AHL but a player with a more expensive contract does.

Panik is one of those players. Not only is he dead money on the Red Wings’ books, he’s also on the New York Islanders' books, costing $250,000 against their cap while he’s buried in the AHL.

The biggest buried contract belongs to the Chicago Blackhawks, who have Brett Connolly and his $3.5 million-per-year contract in the minors, costing them $2.375 million against the cap next season.

Then there’s the Anaheim Ducks, who have John Moore buried in the AHL, costing them $1.625 million against the cap next season. That brings their total dead money up to $3.625 million, just short of the Canucks’ $3.65 million.

The reason the buried contracts are not included in the “Total Dead Money” category is that those buried contracts can be removed in various ways. The Ducks tried to trade Moore to the Vegas Golden Knights, for example, in the voided Evgenii Dadonov trade that didn’t go through because of Dadonov’s no-trade clause.

A player buried in the minors could also be called up to the NHL, so it’s not really dead money in that instance.

The rest of the dead money on the books for these teams can’t be removed. Teams can’t trade away buyout money or get rid of performance bonus overages, even if they trade the player that earned those bonuses. You can think of those bonus overages as a penalty for going over the salary cap in the previous season.

The six teams with no dead money on the books next season are the Seattle Kraken, Boston Bruins, Winnipeg Jets, Tampa Bay Lightning, Vegas Golden Knights, and Calgary Flames.

The Flames, however, do have one buried contract: defenceman Juuso Valimaki. Considering Valimaki is just 23 years old and was a first-round pick, he’ll likely get another chance to earn a spot in the NHL, so might not be dead money on the books next season.

The average amount of dead money on the books for next season is $1,838,762. That means the Canucks have approximately twice as much dead money as the NHL average.

For fun, here are a few of the right-handed defencemen around the NHL making less than the Canucks’ dead money of $3.65 million: David Savard, Brandon Montour, MacKenzie Weegar, and Matt Roy.

Canucks’ prospect development in the AHL is a major issue that has to be addressed
May 5, 2022 5:51 PM

2022 Stanley Cup Playoff Predictions (based entirely on how many former Canucks are on each team)
May 2, 2022 4:39 PM
Comments