Chris Tanev would say he is one of the least social media savvy players on the Canucks. And yet, he is inadvertently responsible for some of the more viral photos Canucks nation has seen in years.

First, it was his attempt at the team logo during NHL Media Day in 2017.

Most recently, Tanev started an Instagram account, which he made at the nudging of teammates Elias Pettersson and Quinn Hughes. His first post was of his pug, Riley, in a cardboard box. Canucks fans instantly fell in love, and Riley-in-a-box even has its own flair on the Canucks subreddit.

Pug in a box

It’s hard to believe Tanev is now an elder statesman of the Canucks locker room. He played his first games during the 2010-11 season – the height of the Sedin era – and even the final three games of that year’s tumultuous Stanley Cup run.

His solid defensive positioning and fearless shot blocking have earned him top-pairing minutes and the respect of teammates, and fans, alike.

Tanev has seen the Canucks’ identity jump quickly from a veteran-laden team at the beginning of his career to that of a dynamic young core, led by 24-year-old captain Bo Horvat and a trio of consecutive Calder-contending rookies. He remembers how challenging the adjustment to the NHL can be, and credits the efforts of Kevin Bieksa, Dan Hamhuis, and Keith Ballard when he was one of few fresh faces on the team.

“They’d take me out for dinner; they’d invite me over for dinner,” said Tanev. “The Hamhuis residence… they always had a nice spread going on. You probably went over there once every two weeks and they never disappointed.”

Now it is Tanev and his fiancée, Kendra, who regularly host younger players for dinner. It can be difficult for a player just entering the league to keep a balanced diet when they eat out a lot, and especially on the road; the couple’s healthier, home-cooked options and casual company have been a welcome gesture.

Hughes, Pettersson, and Brock Boeser are over so often, in fact, they’ve jokingly taken to calling Tanev "dad" on Instagram. 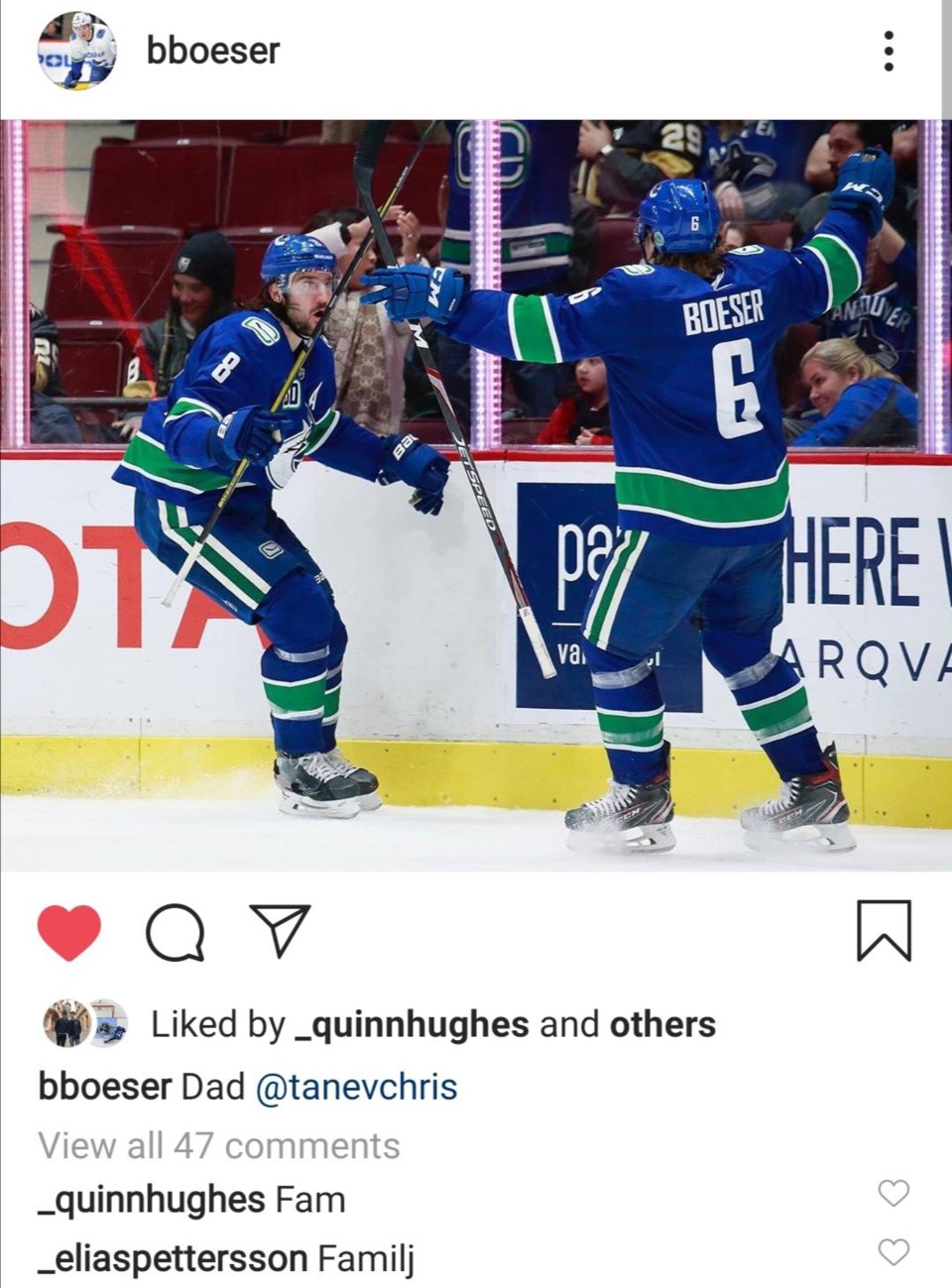 “He's a really good chef, spoiling us,” Pettersson said. When asked for his favourite meal at the Tanev household he couldn’t decide, going with “everything.”

“You can't beat when he starts pulling out the tacos,” shared Hughes with a grin.

Social media has become considerably more prevalent since Tanev entered the league, and he sympathizes with the scrutiny his young teammates face on a daily basis. “It’s good for everyone to just relax, and not have to be in a restaurant where people are bugging them all the time,” he said.

Tanev and Hughes have taken to post-meal games of chess on the latter’s recent visits. The D partners – coincidentally both the eldest of three, hockey-playing brothers – communicate often away from the rink, sharing videos and commentary on a variety of sports.

The couple’s friendship means a lot to Hughes, who, though you’d never know it, is still getting used to the NHL and the city.

“Taney’s been in the league for 10 years, and Kendra, she's been with him all that time,” said the rookie. “They’re a great support system for me here. I think Boes and Petey feel the same way.”

Long-term injuries have limited Tanev to 55 games or fewer the past three seasons, but he’s suited up for all 49 ahead of this year’s All-Star break. The quick transition play of his defensive counterpart and spending less time hemmed in his own end might have something to do with it.

Tanev, who turned 30 in December, is a pending UFA. Per TSN 1040/The Athletic contributor Rick Dhaliwal, the defenceman’s agent maintains his priority is to re-sign in Vancouver.

There’s no mistaking the impact his hospitality and understated leadership style have had on the group. Boeser hopes to pay it forward later in his career.

“It’s tough, going to live by yourself at such a young age. Luckily I had Stech and Taney, who welcomed me with open arms,” said Boeser. “[Building] connections with guys that make you feel comfortable and are there for you, it helps a lot.”

Coordinated Shrek costumes on Halloween will be hard to beat, but a future generation can try.