For the Canucks, Oliver Ekman-Larsson has been all defence, no offence

Ekman-Larsson has been far better defensively than expected but his offence has disappeared.

Quinn Hughes is currently second on the Vancouver Canucks in scoring and is in the top ten in points among NHL defencemen. He added two more assists on Sunday against the Washington Capitals, helping to set up two key goals on the power play.

After Hughes, however, the Canucks are getting next to nothing offensively from their blue line.

Hughes has 30 points in 37 games. The rest of the Canucks defence has combined for 34 points. As pointed out by Thomas Drance and Harman Dayal of The Athletic, only the Ottawa Senators and New York Islanders have received less production from defencemen beyond their leading scorer.

Head coach Bruce Boudreau has lamented the lack of offensive defencemen on the Canucks.

“You need more than one guy like Quinn to be able to jump into the play, to be able to create some offence from the defence,” said Boudreau. “If you don’t have that — look at all the good teams in the NHL, you take the top ten, their defence are all mobile and they can rack up points and they create offence from the defence and, of course, we would like more of that.

“We just don’t have the personnel for that kind of play…When you’re looking at things that you would like, another mobile, puck-moving defenceman always comes to the top of my list.”

Heading into this season, the Canucks were supposed to have another mobile, puck-moving defenceman capable of producing offence. One of the Canucks’ biggest acquisitions in the offseason was a defenceman with a proven track record of putting up points: Oliver Ekman-Larsson.

Call him DEL because he's all D and no O

Even the most pessimistic point projections for Ekman-Larsson had him at 32 points for the season. That was a step back from his consistent 40+ point pace throughout his career but an understandable projection based on getting less power play time behind Quinn Hughes.

Instead, Ekman-Larsson is on-pace for half that total: his 7 points in 35 games so far puts him on pace for just 16 points in 82 games.

That’s a concern considering the Canucks were counting on Ekman-Larsson at least being productive for the first few years of the remaining six years on his contract, which has a cap hit of $7.26 million.

While Ekman-Larsson has struggled to put up points, however, he has been quite effective defensively.

Among NHL defencemen with at least 200 minutes at 5-on-5, only two players have been on the ice for a lower rate of goals against than Ekman-Larsson: Philippe Myers of the Nashville Predators and Luke Schenn, whose solid defensive performance this season could be the subject of another article.

Essentially, Ekman-Larsson’s performance this season has been the exact opposite of what we might have expected given how he’s played over the last few seasons. The trends of his play would have suggested that he could still put up points but that his defensive play might be a letdown.

Instead, the opposite has been true: Ekman-Larsson has been solid in a matchup role defensively but his offensive game has seemingly abandoned him.

But is that the whole story? Let’s take a closer look, starting with his offence.

Let’s start with the obvious: one big reason why Ekman-Larsson isn’t producing many points is that he’s not on the first power play unit.

Hughes is second on the Canucks in power play points behind J.T. Miller and has gotten the bulk of the power play time among Canucks defencemen. That’s no surprise —he’s clearly the Canucks’ best option to quarterback the first unit.

While a reduction in power play points is unsurprising, the bigger issue is that Ekman-Larsson’s even-strength production has cratered. 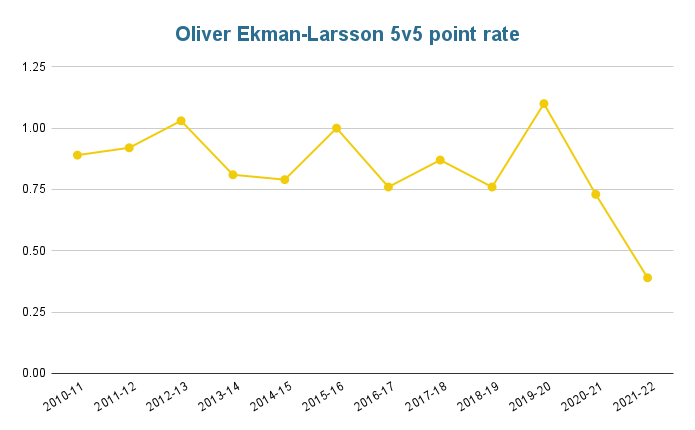 This season, however, Ekman-Larsson is averaging just 0.39 points per 60 minutes at 5-on-5.

Why is that the case?

There are a few potential reasons. One is that Ekman-Larsson has been used primarily in a shutdown role, so has had fewer opportunities to produce offence. But that doesn’t really line up with the available evidence.

We could also look at what forwards Ekman-Larsson is typically on the ice with. If Ekman-Larsson were spending more time with bottom-six forwards, that might play a role in his declining production. But the teammates he plays with most frequently at 5-on-5 are Bo Horvat, Tanner Pearson, Nils Höglander, Conor Garland, J.T. Miller, and Elias Pettersson.

In other words, he’s been playing consistently with top-six forwards, even if he’s played a bit more with the second line than the first line.

Another potential reason is that he is just getting unlucky. This reason might have some legs. So far this season, the Canucks have a shooting percentage of just 5.17% when Ekman-Larsson is on the ice at 5-on-5. That’s the ninth-lowest on-ice shooting percentage among NHL defencemen with at least 200 minutes at 5-on-5.

All of that means is that Ekman-Larsson’s teammates are rarely putting the puck in the net when he’s on the ice and, when they do, he’s rarely getting a point.

How much of a difference can that make? If we take his on-ice shooting percentage and IPP from last season, which were more in line with his career numbers, and apply them to the number of shots taken when Ekman-Larsson has been on the ice at 5-on-5 this season, he would have 10 points at 5-on-5 instead of 4.

That would bring Ekman-Larsson up to 13 points on the season, on-pace for 30 points over a full 82 games, which would be much closer to the most conservative projection for him this season.

Of course, this might be a little too simplistic. There might be reasons why Ekman-Larsson’s teammates might not be scoring as many goals when he’s on the ice or why he’s picking up fewer points on the goals they score. One of those reasons might be a little bit counter-intuitive.

While many of Ekman-Larsson’s offensive numbers are down, one of them is way up: his shots on goal. Ekman-Larsson is averaging 6.96 shots per 60 minutes at 5-on-5, one of the highest rates in the NHL among defencemen. It’s the highest rate of his career by a fairly wide margin — he averaged 4.64 shots per 60 minutes last season and his career high was 5.95.

That may seem like a good thing but it probably isn’t. If Ekman-Larsson is taking a lot more shots, that means that the forwards on the ice with him are likely taking fewer shots. Also, defencemen typically shoot from a greater distance than forwards, meaning those shots are less dangerous.

The Canucks as a whole have had an issue, particularly earlier in the season, with resorting to shots from the point rather than creating more dangerous chances. With Ekman-Larsson, that appears to be particularly true: when he gets the puck, he’s more likely to send a low-percentage shot towards the net than to try to create a better scoring opportunity for one of the forwards on the ice.

So, when it comes to Ekman-Larsson’s offence, there’s reason to believe that it could bounce back with some percentages regressing to the mean, but he might have to adjust some elements of his game for that to happen.

Ekman-Larsson’s defensive game is good but maybe not great

If the goal of good defence is to prevent the other team from scoring, Ekman-Larsson is doing a bang-up job. In over 600 minutes at 5-on-5, Ekman-Larsson has been on the ice for just 12 goals against.

A defenceman isn’t the only player responsible for preventing goals, of course, and that’s where things get interesting, because Ekman-Larsson has benefited from some exceptional goaltending behind him this season.

When Ekman-Larsson has been on the ice at 5-on-5, Canucks goaltenders have combined for an absurdly good .963 save percentage. Only one NHL defenceman (with at least 200 5-on-5 minutes) has had a better save percentage behind him: his teammate, Luke Schenn.

While that’s a testament to how good Thatcher Demko and Jaroslav Halak have been this season, it’s also troubling because it has been repeatedly shown that defencemen have essentially no control over save percentage.

That might seem counter-intuitive, but all of the available data is clear.

What that means is that the low number of goals against when Ekman-Larsson is on the ice is likely more a reflection of the ability of Demko and Halak than Ekman-Larsson’s defensive prowess.

Here, for example, is Ekman-Larsson’s heat map of shots against at 5-on-5 this season, via HockeyViz. 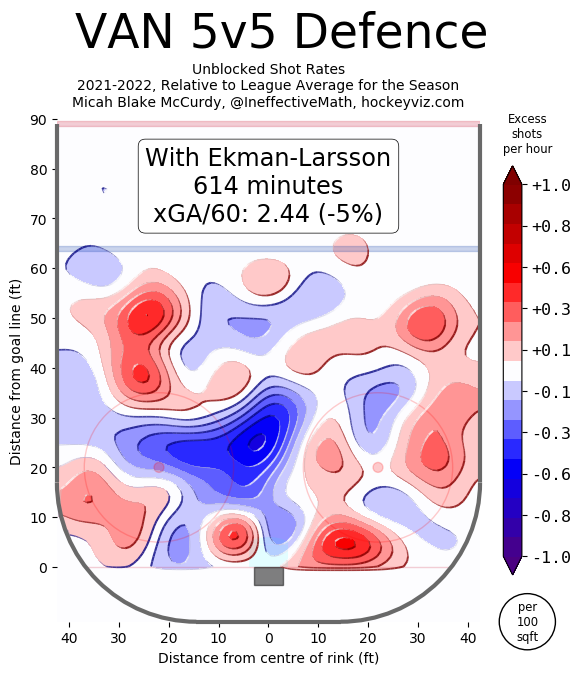 There’s still a worrying trend of shots from the right faceoff circle but perhaps those are more the responsibility of Ekman-Larsson’s usual defence partner on the right side, Tyler Myers. Perhaps he could do a little bit better job of watching for the backdoor play on his side of the ice.

When it comes to other metrics, other Canucks defencemen have performed better defensively than Ekman-Larsson. Hughes has the lowest rate of shot attempts and shots on goal against at 5-on-5. Luke Schenn has the lowest rate of high-danger chances against — he really does well when it comes to clearing the front of the net — and Tucker Poolman leads the Canucks in expected goals against — his issue is that he provides nothing at the other end of the ice.

But Ekman-Larsson rates well in all of those metrics too. Compared to the trend of his last several seasons, Ekman-Larsson’s expected goals against has gone down considerably, even if it’s nowhere near as good as in the prime of his career. 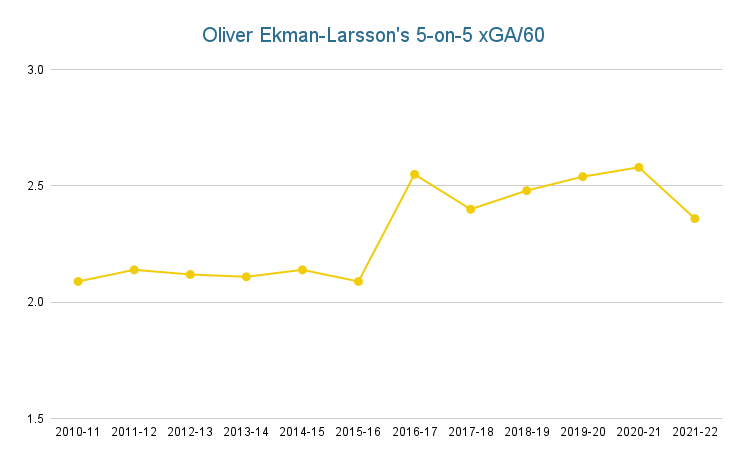 Demko’s save percentage at 5-on-5 this season is .935. If he had that exact save percentage when Ekman-Larsson was on the ice, the Canucks would have given up 21 goals instead of 12.

That would give Ekman-Larsson a rate of 2.06 goals against per 60 minutes, which would rank 55th among the 205 defencemen who have played 200+ minutes at 5-on-5 this season. That’s still good and well above average — it’s just not best-in-the-NHL good.

Again, just like how Ekman-Larsson might be influencing the low on-ice shooting percentage of his teammates because he’s taking so many shots, there may be something he’s doing that is making life easier for his goaltenders. It’s just that there’s a lot of evidence that defencemen can’t consistently sustain that kind of impact.

What conclusion can we draw from all of this?

Offensively, Ekman-Larsson has more to give and should finish the season with more points than his current 16-point pace. At the same time, he’s not the 40-point defenceman he once was and likely won’t be in the future either, particularly with Hughes playing on the first power play unit.

Defensively, Ekman-Larsson isn’t quite the incredible shutdown defenceman that his on-ice goals against numbers would indicate, as he’s benefited from exceptional goaltending behind him. At the same time, he’s been far better defensively than anyone could have reasonably expected given the way his game was trending with the Arizona Coyotes.

Thus, we are left with the wholly dissatisfying conclusion that Oliver Ekman-Larsson has been, well, fine.

How much have the Canucks actually improved under Bruce Boudreau?
Jan 5, 2022 5:39 PM
Comments