I Watched This Game: Canucks season continues to slip away with loss to Golden Knights

"We played our butts off for the second and third but it’s too late."

The Canucks have officially qualified for the playoffs!

The Abbotsford Canucks, that is.

With a 3-1 win over the Laval Rocket on Sunday, the Abbotsford Canucks have clinched a spot in the AHL playoffs. Jack Rathbone led the way in the win with two points, including the game-winning goal, giving him 8 points in his last 4 games, while Mikey DiPietro stopped 32 of 33 shots.

Of course, the AHL playoffs are a little bit easier to qualify for this year than the Stanley Cup Playoffs. The AHL expanded qualification to 23 teams this season, with all but two teams in each of the league’s four divisions qualifying for the Calder Cup Playoffs. With a 32-21-5 record, the Abbotsford Canucks are currently fifth of nine teams in the Pacific Division but have enough points that neither of the teams in eighth or ninth can catch them.

If playoff qualification in the AHL worked like it does in the NHL, the Abbotsford Canucks would currently be in the second wild-card spot in the Western Conference, right on the edge of the playoff picture. Still, that would be a better spot than where the Vancouver Canucks are right now.

The situation is dire. The Canucks came into Sunday’s game against the Vegas Golden Knights with the season on the line. The math made the playoffs unlikely, but there was an outside chance they could squeak in if they embarked on an epic run in the final 13 games of the season, particularly with three games in April against the Golden Knights, one of the teams ahead of them that they need to reel in.

After yet another rough first period, the Canucks mounted a third-period comeback, tying the game at 2-2 with ten minutes left. The Canucks poured on the pressure, desperate to end the game in regulation and prevent the Golden Knights from picking up a point.

With two seconds left in the third period, Tanner Pearson won a battle below the goal line and sent a centring pass in the slot for Tyler Myers, who had snuck down from the point and was wide open.

With the season on his stick, Myers sent his shot two feet wide.

It’s not Myers’ fault, of course, whether we’re looking at the micro of this moment or the macro of the whole season and the makeup of the roster — it's not his fault Benning overpaid him, after all. Pearson’s pass was perfect but the ice at the end of the third period was not. You can see the puck skip up into the air off of some imperfection in the ice just a moment before it reaches Myers’ stick.

Games are won and lost on little skips of the puck like that but seasons are not. Really, this game could have been the beginning of a franchise-record 11-game winning streak for the Canucks and they still might have missed the playoffs.

The bounces may change from game-to-game but the pattern was all-too familiar. The Canucks have played dozens of games, it seems, exactly like this one: a brutal first period that puts them in a deep hole; a turnaround in the second period that puts them back on track; a hard-fought third period that sees them come up just short all too frequently.

It’s the season in miniature: the 8-15-2 start that got Jim Benning and Travis Green fired; the turnaround under Bruce Boudreau that reignited hope in the fanbase; and the hard-fought back half of the season that has seen the Canucks come so close and yet so far. 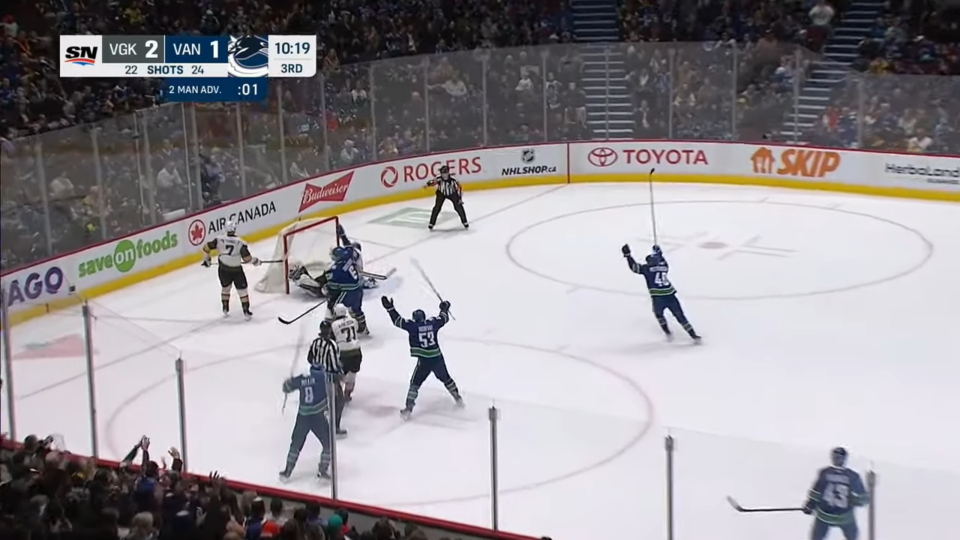