Is Jake Virtanen playing his way out of Vancouver? Not just yet

The polarizing winger has yet to have a positive impact for the Canucks in these playoffs.
Aug 17, 2020 2:25 PM By: Daniel Wagner 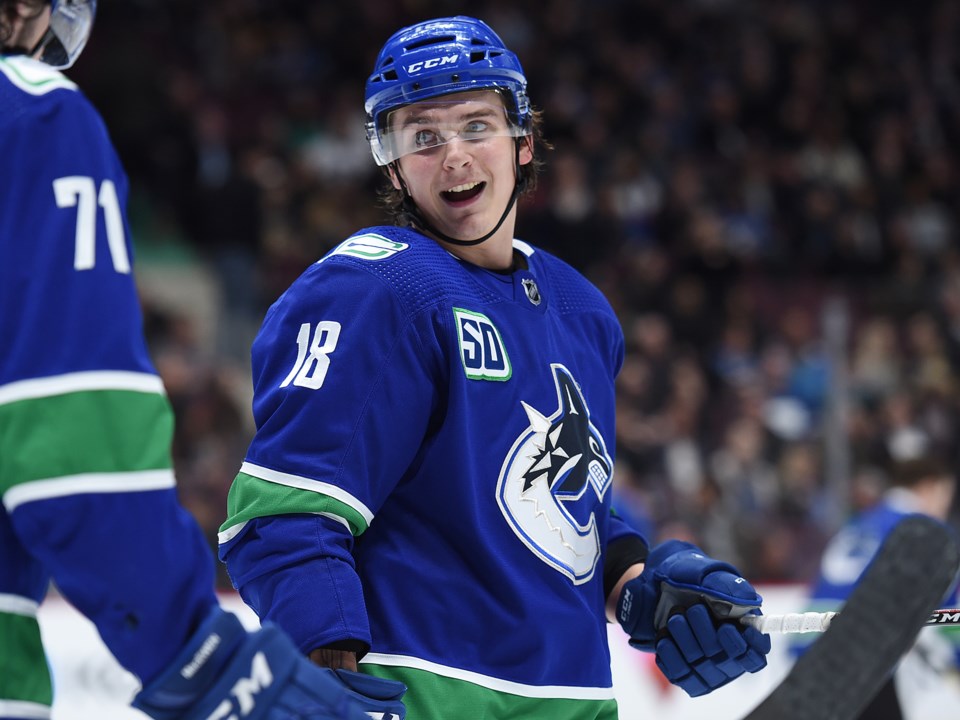 After a career year, Jake Virtanen has struggled to find his footing in the playoffs. photo: Dan Toulgoet

Jake Virtanen was supposed to be a player built for the playoffs: a big, powerful, fast winger, who could provide an answer to the physicality of teams like the St. Louis Blues and Boston Bruins. Whenever criticisms would arise, Virtanen’s defenders would frequently say, just wait until the playoffs.

Unfortunately, Playoff Jake has yet to show up.

Instead, frustrations with the Canucks’ 6th overall pick in 2014 have continued to rise. There was Virtanen’s ill-considered visit to a nightclub prior to joining the Canucks at their training camp before entering the postseason bubble. Then, a disappointing showing at said training camp — one in which his captain, Bo Horvat, loudly reamed him out during a scrimmage — saw Virtanen get booted from the lineup in favour of other wingers for Game 1 against the Minnesota Wild.

Throughout that qualifying round against the Wild and the Canucks’ subsequent first round matchup with the St. Louis Blues, Virtanen has struggled to have an impact. While he’s played limited minutes on the third or fourth lines, he also hasn’t given his head coach any reason to give him more minutes.

When he has been noticeable, it’s often been for the wrong reasons, like the two undisciplined penalties he took in Games 2 and 3.

The Canucks’ Twitter account, seemingly looking for something to celebrate about Virtanen’s game, highlighted a glancing hit he threw on the forecheck. It seemed emblematic of Virtanen’s performance thus far in the playoffs, all sound and fury, but accomplishing nothing.

It’s a surprising fall from grace for Virtanen, who was fifth on the Canucks in goals with 18. He was dangerous in transition with his speed and saw a lot of success on the second power play unit, where he scored 6 of his goals. In fact, adjusted for ice time, Virtanen was the Canucks’ most efficient scorer on the power play, with a team-high 5.9 goals per 60 minutes. There were plenty of reasons to be optimistic about Virtanen.

This postseason has put a damper on that optimism. He has just five shots on goal through six games in the postseason, with no points, and his underlying statistics are ugly: his expected goals percentage — a metric that combines shot attempt differential with shot quality — is just 37.4%, better than only Tyler Motte among Canucks forwards. That indicates the Canucks have been badly out-chanced when Virtanen is on the ice at 5-on-5.

Considering Virtanen is a pending restricted free agent and the Canucks have a cap crunch pending this off-season, it’s understandable that he might be a player the Canucks would look to move. The team’s clear frustrations with his game have some fans wondering if Virtanen is on his way out of Vancouver.

As much as Virtanen has frustrating tendencies — he sometimes gets lost in the defensive zone, has trouble picking up pucks along the wall, and rarely takes advantage of his size and speed to drive the net — he still has a lot to offer and hasn’t fully worn out his welcome with the Canucks.

Even in Game 3, when Green shortened the bench late in the game, Virtanen wasn’t one of the players that he benched. Zack MacEwen, Antoine Roussel, and Jay Beagle barely played in the third period and overtime, but Virtanen kept playing, forming a line with Brandon Sutter and Tyler Motte.

As much as the result of Game 3 wasn’t great, either for Virtanen individually or the Canucks as a whole, it’s still a positive sign for Virtanen that his coach turned to him in the most crucial moments of a playoff game.

There's also the issue of whether the current bizarre situation — a playoff tourrnament played in a quarantine bubble in the middle of summer during a global pandemic — is a good time to make significant assessments of a player's long-term future.

The question for Virtanen will always be whether his strengths overcome his weaknesses. He’s legitimately great at skating the puck up ice in transition, a crucial and underrated skill. He has a heavy shot that can score goals and create rebounds for his teammates. And, when he sets his mind to it, Virtanen can throw big hits that force opponents to keep their heads on a swivel.

Do those strengths outweigh the deficiencies in his game? This season, they arguably did.

That shows up in his isolated summary from hockey analytics website HockeyViz. These shot maps show that the Canucks created higher-than-average shot quality with Virtanen on the ice. As much as the Canucks created a lot of shots from bad angles with Virtanen — a function of his tendency to shoot the puck from everywhere — they also created a lot of shots from in tight around the net. 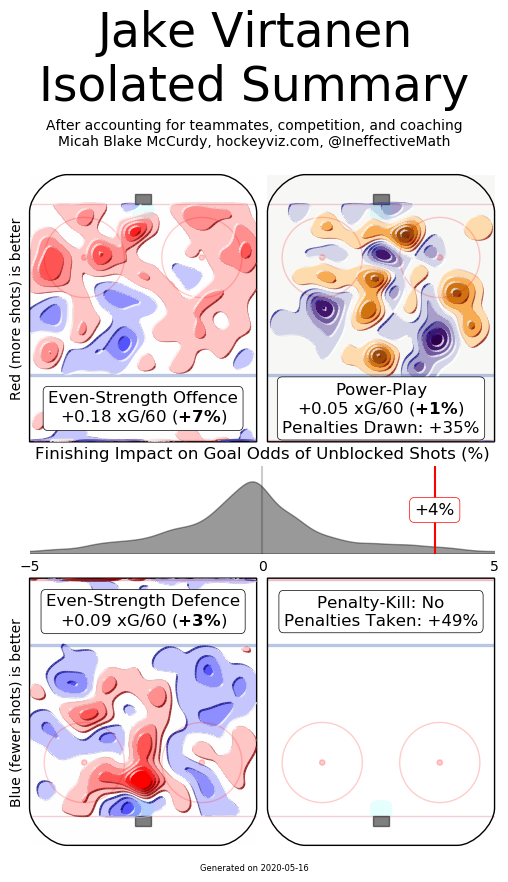 The Canucks also allowed higher-than-average shot quality with Virtanen, which isn’t good, but his overall impact was still positive, particularly when you take into account his work on the power play and his impact on finishing, which was far higher than the league average.

It’s easy to understand why Virtanen can be frustrating — he doesn’t always seem to take his hockey career as seriously as perhaps he should — but he can still have a positive impact on the ice.

At the same time, that positive impact has to actually show up at some point in the playoffs. The truth is that Virtanen is on thin ice and needs to once again prove himself to his coach and his organization.

The Canucks’ confident power play could win them the series against the Blues
Aug 13, 2020 3:32 PM
Comments