In a game marred by controversial calls, the Canucks couldn't come up with any run support for Jacob Markstrom.
Feb 4, 2020 11:12 PM By: Daniel Wagner

Putting together previews for an NHL game is a pretty thankless job. It can be a lot of work to nail down the right lines from each team’s morning skate, to research the trends for each team, and figure out key matchups. Then, of course, all that work gets thrown out the window as soon as the game starts, with little to no reason to ever revisit it.

It’s a bit easier if you don’t take it quite so seriously. Often the “Keys to the Game” on most broadcasts are like this. Does the opposing team have a good power play? The key to the game is to stay out of penalty trouble. Is a player on a point streak? Well then, the key to the game is for them to stay hot.

Is it a little bit low-effort? Perhaps, but it’s understandable too, especially on a television broadcast when you have a 20-second segment; you’re not going to try to a full systems breakdown of a team in that timeframe.

Of course, there’s low-effort and then there’s no-effort, and that’s how you get this comedic goldmine of a graphic from NESN, aka. the New England Sports Network, the regional network that carries Boston Bruins games. 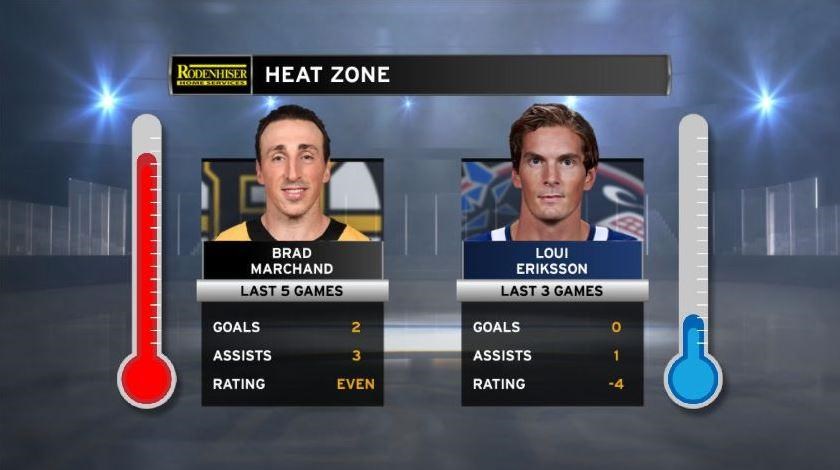 That’s from the NESN Twitter account, a little piece of SponCon called the “Heat Zone.” Only, the two players highlighted as hot and cold aren’t exactly on an even playing field: one is Brad Marchand, who is sixth in NHL scoring and on-pace for his second-straight 100-point season.

The other is Loui Eriksson.

As much as Eriksson has been winning fans over recently with his empty net prowess, comparing him to Marchand is like comparing Elias Pettersson to Chris Wagner of the Bruins, who should evidently be utterly ashamed that he’s gone 10 games without a goal.

Everything about this graphic is hilarious, but first you have to look past Loui Eriksson. No, literally, look past him: the logo they used for the Canucks is a relic from the West Coast Express era, with the maroon-red teeth and trim.

Also, a point-per-game for Marchand this season is a cold streak, quite frankly. He’s averaging over a point-per-game, so why would less than that mean he’s hot? Meanwhile, one point in three games is pretty much a hot streak for Eriksson a this point in his career. They got the thermometers reversed.

The trouble for NESN is that if they had compared Marchand to someone like J.T. Miller, Marchand would have paled in comparison. Heading into this game, Miller had 4 goals and 8 points in his last 5 games. Throw in his plus-6 rating vs Marchand’s EVEN rating, just for kicks. That might have broken their poor thermometer, though.

Of course, just like all game previews, none of that mattered once the game itself actually started. And I watched this game.

IWTG: Blues are prey (and the fantabulous emancipation of one Jake Virtanen)
Jan 28, 2020 12:52 AM
Comments