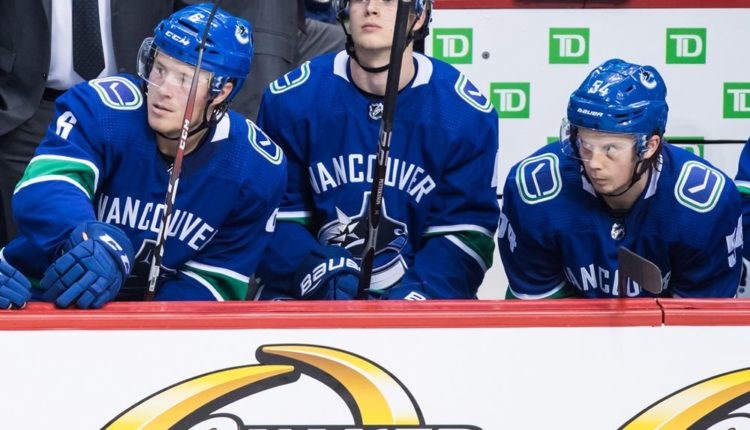 Jonathan Dahlen sitting alongside Brock Boeser and Elias Pettersson for the Vancouver Canucks.

Both of the Canucks’ trades on deadline day were unexpected, but for very different reasons. The Erik Gudbranson trade caught fans off guard because no one expected another team to be interested in acquiring Gudbranson given his struggles this season. The Jonathan Dahlen trade to the San Jose Sharks, however, was unexpected because the Canucks have few other prospect wingers in their system with top-six potential.

In his post-deadline press conference, Canucks GM Jim Benning said that Dahlen’s agent had requested a trade. That brought one element of the trade into focus — why it happened at all — but questions still remained.

A pair of writers for Sharks blog Fear the Fin, including Canucks writer Lachlan Irvine, caught up with Dahlen after his first game with the San Jose Barracuda. In that interview, however, Dahlen denied requesting a trade, which just raises further questions. Dahlen’s agent, J.P. Barry, confirmed that he did request a trade, so why did Dahlen deny it?

This feels like an Obi Wan Kenobi situation: it’s entirely possible that what each of them is saying is true, from a certain point of view.

Barry said that he and the team had multiple conversations and that moving Dahlen was discussed as one of the options. Perhaps Dahlen didn’t expect that particular option to be exercised by the Canucks, but Benning clearly saw those discussions as final: in his view, Dahlen wanted a trade, so he made it happen.

The bigger question is, how did it get to this point? Generally speaking, a trade request is a last resort when all other options have been exhausted. Why did Barry request a trade for Dahlen?

Benning tried to answer that question at the press conference by speculating about Dahlen’s motivations. Whatever his intent, the end result sounded like he was throwing Dahlen under the bus.

There’s a standup special from comedian Mike Birbiglia called, “What I should have said was nothing.” The titular joke involved that relatable moment when words come spilling out of your mouth that you instantly regret.

That phrase came to mind when Benning speculated about Dahlen’s motivations: what he should have said was nothing.

“Different players and agents have their own reasons why they do things,” said Benning, suggesting he didn’t really know Dahlen’s specific reasons. That in itself is troubling, but then he continued.

“I find young players now, sometimes they don’t want to pay their dues in development time, they just want to be given an NHL opportunity right off the start,” he said. “We just felt that there was some development left in his game before he’s ready to be given an NHL opportunity and we felt he wasn’t there yet and I guess that’s kind of where the discrepancy on what they thought and what we thought where he was happened.”

Dahlen, however, denied that he thought he deserved an NHL opportunity.

“First of all, I want to be a good player in the American Hockey League,” said Dahlen. “I haven’t even put my eyes on the NHL yet, I just want to play in the [AHL] first and make a good impression there.

“Obviously, you can’t jump over a step, and that’s not what I want to do either because that would just look terribly wrong if I’m in the NHL and not good enough. I’m trying to develop my game here in the [AHL] and become a good player there first before I even think about taking the next step.”

When asked what he still needs to work on to make it to the NHL, Dahlen didn’t mince words, reinforcing his statement that he knows he’s not ready yet.

“I think it’s a lot,’ he said. “I have to work on a lot of things in my game. Get speed. I’m really excited to work here with a good coaching staff. Work on every detail in my game, to play in the American League first of all, and be a good player there. We’ll take it from there.”

Utica Comets head coach Trent Cull confirmed that the NHL never really came up in his discussions with Dahlen.

“It is not something we talked a lot about,” he said to Ben Birnell of the Utica Observer-Dispatch. “I thought we were trying to put him in situations to succeed...I thought [Dahlen] was developing not unlike Zack MacEwen...Obviously he wanted to play in the NHL, but he wasn’t coming in telling me that he should go up.”

So, if it wasn’t impatience to get an NHL opportunity, why did Dahlen’s relationship with the Canucks deteriorate to the point of requesting a trade?

Barry suggested, “It was the inconsistency of where he hit in their plans.” That’s not particularly clear, but Dahlen’s comments in San Jose definitely speak to his frustration in Utica.

“We had a little stuff down there in Utica where I really wanted to feel good about myself and have confidence in my game and play well,” said Dahlen. “I don’t want to say anything bad about anybody, but I didn’t feel too good about my hockey game there.

“To be honest, I just want to put it behind me, and I’m really excited to work with the great coaching staff here who have already made me feel a lot better about myself. I’m really ready to get going here and work hard and just be happy and love to play hockey.”

When asked about any specific challenges in Utica, Dahlen demurred.

“It’s a hard question,” he said. “It’s a great group of guys there. Great teammates. They’re really nice, everybody there. Great captains and vets and everything. Had a Grade-A experience with the team there.”

According to Dahlen, his experience in Utica led to him lacking confidence and not feeling good about his game. To speculate, it could have something to do with the Canucks organization trying to turn him into a different type of player. Perhaps the Canucks didn’t see him as a future top-six forward. Some of Benning’s comments could be interpreted that way.

“I think there’s upside to Jonathan’s game,” said Benning. “I don’t, maybe, necessarily think there was a fit to the style of game our team, or our organization likes to play, with speed and ski...speed and pressuring pucks and getting in hard, getting to the net and stuff.”

That’s just speculation, but so were Benning’s comments on Dahlen’s motivations and desire to skip the development process. The result of Benning throwing Dahlen under the bus was a surprising level of vitriol directed towards Dahlen from Canucks fans online.

Before the deadline, fans knew Jonathan Dahlen as Elias Pettersson’s happy-go-lucky best friend, who cracked jokes when mic’d up at the Young Stars tournament. They knew him as fiercely loyal, passing up an opportunity to play in the SHL in order to stay with Timra IK in the Allsvenskan and lead them to promotion. At no point was his character questioned.

That return to the Allsvenskan last season, however, may have been the start of the issues from the Canucks’ point of view. Dahlen came down with mononucleosis before the start of the 2017-18 season, which severely saps a person's strength. It can take literal months before you feel fully healthy again. He was behind the 8-ball right from preseason and knew he wasn’t strong enough yet for the AHL. Combined with the desire to finish what he started in Timra, the return to Sweden became an obvious decision.

The Canucks, however, were evidently unhappy with that decision. Perhaps that’s why, as soon as Benning had an opportunity to move Dahlen and the ready-made reason of a trade request, he acted.

There was no rush to trade Dahlen at the deadline. He has another year on his contract and will be a Restricted Free Agent when it expires, so the Canucks had plenty of time to shop Dahlen around. But, if the Canucks had soured on Dahlen, perhaps they wanted to make a move more quickly.

All in all, it seems like an unfortunate situation: Dahlen wasn’t happy with his development in Utica and the Canucks weren’t happy with Dahlen. Hopefully everyone’s a little happier now.