“I feel like I’ve been pretty good in my own end — winning puck battles and being smart and responsible.”

It hasn’t been the start to the season that J.T. Miller envisioned when he signed a seven-year, $56 million contract extension.

Miller has been on the ice for more goals against than any other forward in the NHL so far this season as his team has given up leads in five-straight games for an 0-3-2 record.

Despite this, Miller doesn’t think he’s playing particularly poorly defensively, telling Postmedia’s Patrick Johnston that he feels “really good about what I’ve done so far” in the defensive zone at 5-on-5.

"I'm not going to change the way I'm playing."

"I'm trying to be patient,” said Miller, “but I'm not going to change the way I'm playing away from the puck and in my own end because I don't think I've given up much of anything there."

On Friday after practice, he added, “I feel like I’ve been pretty good in my own end — winning puck battles and being smart and responsible.”

This seems like a stunning lack of self-awareness on the part of Miller. He’s had some serious defensive miscues in the defensive zone and he’s been on the ice for the ninth-most shots on goal against among NHL forwards. He’s getting caved in at 5-on-5, with a team-low 40.59% corsi percentage and a 27.76 expected goals percentage, according to Natural Stat Trick. 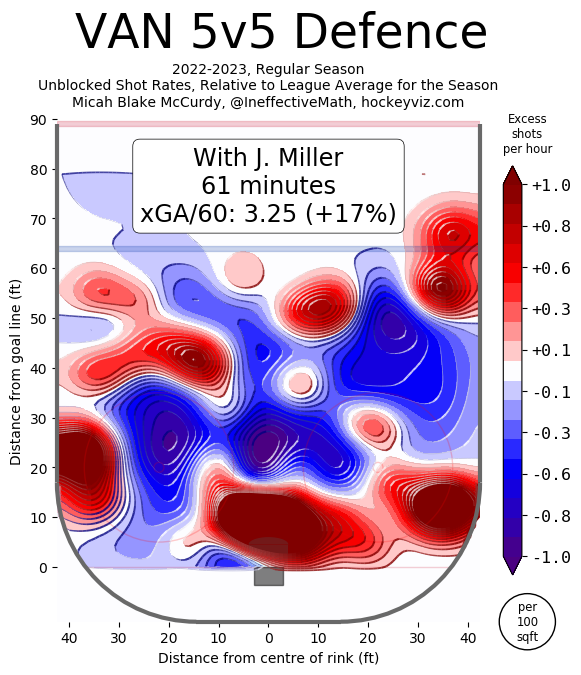 "I want to...be equally as hard to play against in my own end."

While Miller has definitely been on the ice for a higher rate of shot attempts and shots on goal than average at 5-on-5, actual scoring chances have been pretty close to his career average. It's not always under a player's control which shots and chances turn into goals against and Miller hasn't been at fault for every goal scored against the Canucks when he's been on the ice.

Of course, Miller’s goal heading into this season was not to be the same defensively as before, but better.

“I look at some of my favourite players around the league, and they play in their own end first and a 200-foot game all the time and are very hard to play against,” said Miller. “I want to excel to that level and be equally as hard to play against in my own end as I am in the offensive end.”

Miller definitely hasn’t accomplished that goal so far this season. Even if he’s not playing any worse defensively than his career average, that average wasn’t great to begin with.

"I’ve got to believe that it’s coming.”

The real difference for Miller so far has been on the offensive side of the puck. He and his linemates aren’t creating anything offensively at 5-on-5, to an alarming degree. This is the lowest rate of shots attempts, shots on goal, expected goals, and high-danger chances of Miller’s entire career at 5-on-5.

His offensive zone heatmap from HockeyViz illustrates it well — the Canucks have been completely unable to get anywhere near the net when Miller is on the ice at 5-on-5. 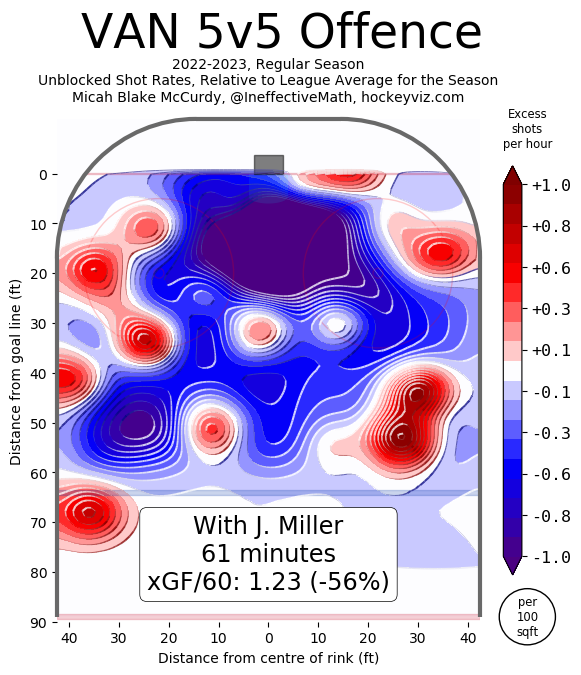 That’s shockingly bad and the biggest reason behind his team-worst corsi and expected goals percentages. He’s playing about the same as he always has defensively but isn’t creating anything at all offensively to make up for it and that's a much bigger concern than his play in the defensive zone.

Two of Miller’s three points this season have come on the power play and he has just four shots on goal at 5-on-5. Miller is certainly aware of his line's lack of offensive push but is trying to stay positive.

“At some point, I think the puck will start ending up on my tape a little more but right now it’s a little hard to come by it,” said Miller. “I’m trying to be patient. For myself, the timing will get better, the game will open up — I think it’s important for me not to be impatient and change the way I’m playing. I think at some point, I’ve got to believe that it’s coming.”

It better. The Canucks are relying on his production this season and for seven more after it.

In the meantime, the Canucks should probably rely a lot less on Miller defensively.