Micheal Ferland thought he was healthy; he wasn't

On Friday night in Utica, Micheal Ferland played his first game with the Comets on a conditioning stint. It didn’t last long, as he left the game before the second period with reported “concussion-like symptoms” and did not return.

Micheal Ferland left tonight's game due to concussion-like symptoms and and will not return as a precaution.#UTIvsSYR

This is immensely troubling, as Ferland has had some very well documented concussion issues throughout his career and head injuries have fundamentally shaped Ferland’s Canucks tenure. Signed to a four-year deal worth $14 million in July, injuries have limited Ferland to just 14 games in blue and green.

Ferland suffered his first concussion of the season in a fight with Los Angeles Kings forward Kyle Clifford back in October. Upon his return to the lineup a month later, Ferland played just two games before leaving a contest against Toronto with what the organization called “concussion-like symptoms.”

Ferland outlined exactly what happened in that game, and why he took the next two months off recovering on the IR.

“There were times in the past where I tried rushing through things and got to find out the hard way. Coming back in Toronto, I thought I was good, maybe a little bit of symptoms, but I thought I was good enough to play,” said Ferland to reporters in Vancouver.

Ferland went on to explain that he felt dizziness after throwing a big hit in that game. That was when he realized he wasn’t fully healed. It was then he decided to spend the next two months making sure he’s truly ready before he returns to the Canucks’ lineup.

To get a better understanding of the situation as a whole, Vancouver is Awesome spoke with Dr. Cirelle Rosenblatt who is the Founder & Clinical Director at Advance Concussion Clinic in Vancouver.

Dr. Rosenblatt has over 20 years of experience in health psychology and rehabilitation neuropsychology and has spent the past 10 years specializing in concussions, with a focus on building out an evidence-based model to support healthy recovery from mild traumatic brain injury.

Rosenblatt explained that the greatest risk to any individual or athlete is the risk of reinjuring the brain before the first injury has fully healed -- which was certainly the case for Ferland last time around.

“The greatest risk/threat to any individual who has suffered a concussion is the risk of a second concussion before the first has resolved,” she said. “The hope would be that the staff, and the concussion protocol they are adhering to, provided that certainty (to a reasonable degree) prior to clearing this player to return to sport. But it is possible that the protocol does not meet that standard, i.e., reasonable certainty of recovery in all arenas in which concussion can present or manifest.”

Rosenblatt compared the brain to a car. If one part isn’t working, the car itself may not run properly, just as the brain will not work properly if one of its systems is down. To better explain this, Rosenblatt used the following graphic to showcase the six main areas of the brain affected by concussion: 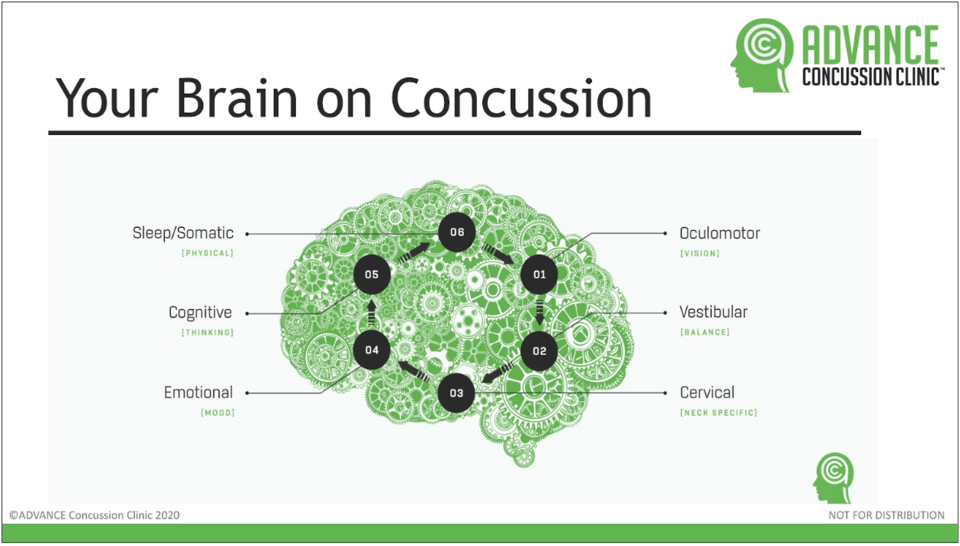 Advance Concussion Clinic graphic on the areas of the brain affected by concussions.

The most commonly affected areas seen in athletes who suffer concussions, at least in Rosenblatt’s experience, are the oculomotor and vestibular functions.
“For patients with persistent symptoms, it is quite often that ocular vestibular function is disrupted. Ocular motor function was the last piece of knowledge and evidence to hit the concussion scene.” said Rosenblatt. “Our visual system works hand in hand with a balanced system. Those two partner in perfect synchrony to help you navigate space.

“That's one of the more basic functions for a person, so when those systems are affected, the brain will prioritize those functions as well as look to direct resources. So it just tends to occupy a lot of the brain’s energy and focus [when those systems are affected]. And then people notice that they're not thinking as well or they don't feel like themselves. Then there's a whole bunch of other things, but for their brain, it's all about just correcting those systems.”

It’s possible Ferland had been playing with a brain injury that hadn’t fully healed itself before, but it’s certainly true of his return to the lineup in December.

“There was still just a bit of lingering stuff that was still there.” Ferland told reporters.

It would appear that Ferland has now gotten an entire team of specialists to examine each area of his brain, something Rosenblatt said is extremely important when it comes to rehabilitating concussions.

Ferland sounded extremely confident that he’d be able to return and play his trademark physical style, and a huge part of that came with the belief that all arenas of his brain had fully healed:

“I honestly believe once I return and I’m 100%, I’ll be a different kind of player. I feel like I can go back to playing the way I need to play, and not get these little symptoms that keep coming back and keep coming back. I think that there’s been something lingering that wasn’t fully taken… how do I say this?” Ferland said as he searched for the right word before circling back to repeating he just wants to make sure he’s 100 percent this time.

A player’s vulnerability is heightened if they’ve suffered concussions in the past, but it is dramatically increased if they return to play before their brain has a chance to make a full recovery, which is likely why Ferland got hurt once again in his first rehab game with the Utica Comets Friday night.

Dr. Rosenblatt stressed that concussions are treatable injuries that individuals can make full recoveries from if they’re given the proper care and rehabilitation. This time around, it seemed like both the Canucks and Ferland ensured that they got only the best care in hopes of allowing Ferland to return without having to worry about reinjuring himself once again, but there is something that is clearly still not fully healed.

Given the recurrence of "concussion-like symptoms" each time Ferland has attempted to return to action this season, the best course of action is likely to shut him down for the season and ensure he gets world class care now and through the offseason. He needs to ensure his head injury is completely healed before attempting to make a return.

If a player suffers concussion-like symptoms without any significant contact to the body, it’s a surefire sign that something still isn’t right with the original injury. Now it’s all about taking the proper time and following the correct measures to figure out exactly what that lingering problem is.