The Canucks struggles without Markstrom in net could drive up his asking price.
Mar 10, 2020 10:11 AM By: Ryan Lambert 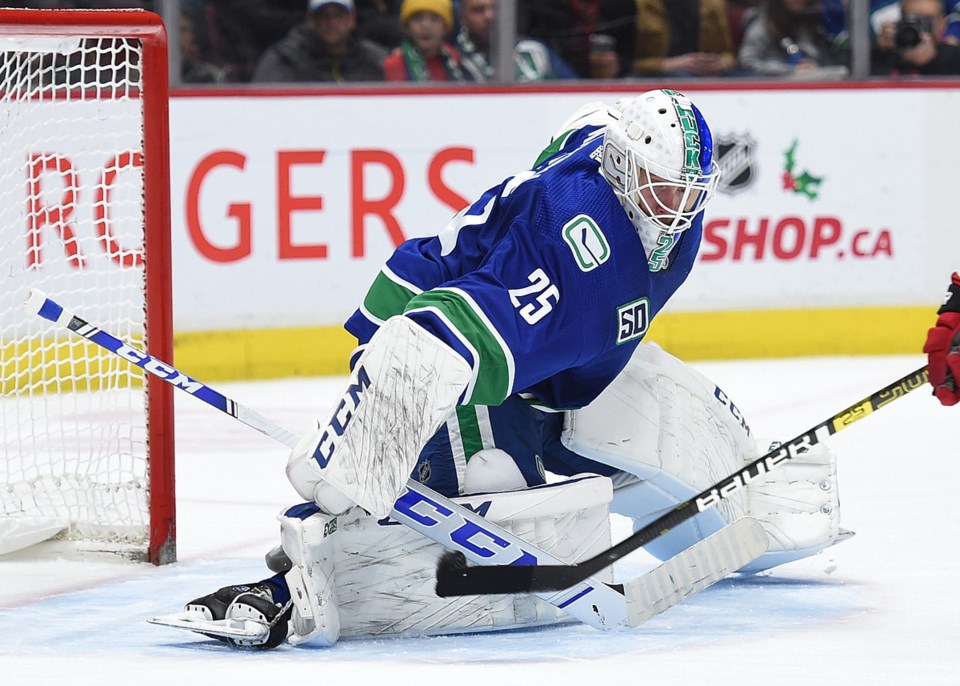 Jacob Markstrom makes a save for the Vancouver Canucks. photo: Dan Toulgoet

Maybe the most interesting story in the Pacific Division over the last few weeks has been how hard the Canucks have dropped off.

What looked like a guaranteed playoff appearance (to take the sting out of the first-round pick traded away for JT Miller) is now anything but secure; many projections now give the Canucks a less than 60 percent chance to make a postseason appearance. And a lot of that, we can safely say, is down to the Jacob Markstrom injury.

Since Markstrom went down on Feb. 22, the Canucks have gotten atrocious goaltending from Thatcher Demko and Louis Domingue, the latter in only one appearance. We’re talking a .904 save percentage at 5-on-5 (sixth-worst in the league over that stretch) and .887 in all situations (fifth-worst), which probably cost them a couple of points in the standings. Flipping any one result from a loss to a win would have the Canucks in much better shape, and Markstrom likely would have provided at least that much quality.

So we know what this means for Vancouver in the short term: they better hope Markstrom is back ASAP, because they can’t really afford to have many more points slip away. But the bigger and more pressing question may just be what it means for the club in the long term.

Markstrom is an unrestricted free agent after this season and he’s having a phenomenal contract year. Among all NHL goaltenders, he’s 19th in goals saved above expectation (GSAx), and that’s with a bit of a dip in his performance in January and early February (.902 over 12 games). The problem for the Canucks is what the low quality of play in front of Demko and Domingue might mean for the team’s long-term financial situation.

Because if we’ve learned anything from the Jim Benning era, it’s that this general manager can talk himself into one guy being the only difference between the team competing or missing the playoffs again. In the past it was the Jay Beagle-type bottom-of-the-lineup guys. This past summer it was Tyler Myers.

Now in July, it’s altogether possible that because of these recent results Benning could tie the team to a lengthy contract for an over-30 goalie whose best season by save percentage was 2015-16 in an extremely limited role. Over the course of his career in Vancouver, his save percentage has been slightly below what you’d expect a league-average goaltender to stop, though it’s also fair to say the teams in front of him largely haven’t been great.

He’s been better than average by GSAx the last two years, but the fact that the Canucks are just 12-11-2 this season in non-Markstrom decisions could cause a dangerous level of trust being placed in the goalie. It’s always tough to ballpark where he’d be valued, but one can easily see him getting signed up through his age-35 season at a too-high price point, hurting the team’s overall cap picture in the process.

The salary cap is supposed to go up, of course, but the projected numbers were calculated before all the coronavirus stuff that could, in theory, end up hurting revenues if buildings have to be closed or games played in empty arenas. But even if the league’s salary cap jumps to, say, $85 million from the current $81.5 million, the Canucks will still be in tough to make everything work.

They have almost $63.5 million already committed for next year, and while some of that comes off the books via what’s likely a Micheal Ferland LTIR situation, they’ll still need to re-sign Tyler Toffoli, Jake Virtanen, and Troy Stecher, and either re-sign or replace Chris Tanev, not to mention Adam Gaudette and Josh Leivo.

But they would need to do all that with the understanding that an Elias Pettersson extension would be right around the corner and, frankly, quite expensive. They could maybe find a buyer for Loui Eriksson (THREE more years?) but that seems implausible.

And regardless of Demko’s recent struggles — which coincide with struggles from the skaters in front of him, just by the way — there’s little reason to suspect he has suddenly become the kind of player who isn’t an NHL goalie. Plus, with Michael DiPietro waiting in the wings, can Benning really afford to create a Luongo/Schneider situation (or hell, a Brodeur/Schneider situation) by re-signing a career-average goaltender Jacob Markstrom long-term based on a couple good seasons?

As I said last week, “in the playoff conversation” was likely the Canucks' best-case scenario coming into the season, so recent results taking the team to the edge of the playoff picture shouldn’t be surprising. But the way those results have come about may be enough to convince team brass they’re just a decent goaltending performance away from competing more seriously.

That would obviously be true for many teams. The odds are that Demko, plus either DiPietro (probably not ready for the big time quite yet) or a $2.5-million goaltender, can get you there next year if you make other smart improvements to the roster, rather than spending big on Markstrom.

And that, in turn, doesn’t hamstring the team’s finances for the next half-decade. It’s something to think about.

PACIFIC POOL PARTY: Where things stand after the trade deadline in the Pacific Division
Feb 25, 2020 10:04 AM