REPORT: Canucks out on potential Wayne Simmonds trade due to the salary cap

Did Roberto Luongo save the Canucks from a potentially costly trade with his salary cap recapture penalty?
0
Feb 20, 2020 5:31 PM By: Daniel Wagner 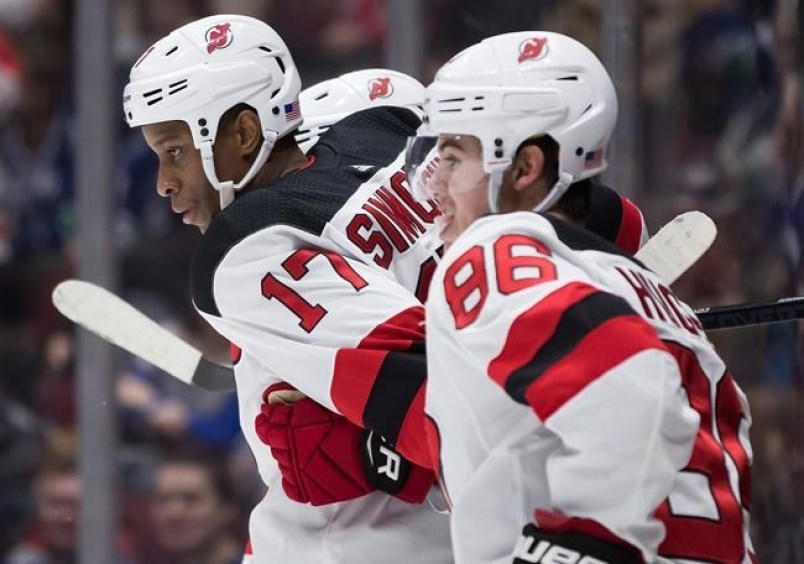 Tyler Toffoli made his Canucks debut on Wednesday night in Vancouver after arriving from the Los Angeles Kings via trade. He immediately made an impact on the top line, assisting on a J.T Miller goal in the third period.

The trade for Toffoli, who is in the final year of his contract, was a significant move for the Canucks, signalling an urgent desire to make the playoffs this season, even if it might cause the team some long-term pain with prospect Tyler Madden and a second-round pick going to the Kings. It might not be the only trade the Canucks make prior to Monday's trade deadline.

"If something makes sense for us to try to fill the needs or the holes that we think we have on the team, we will look to try to do that within reason," said Benning after the Toffoli trade. "We don't have our first and second round pick right now for the draft, so I don't foresee us trading any more picks, but if something makes sense, maybe with with one of the young players that we feel we have enough depth at that position, we maybe look to do something like that."

The Canucks do have some distinct needs, three of which PITB discussed earlier this month: a left-side defenceman to shore up the third pairing, an upgrade for the bottom-six forward group, and a top-six winger for Bo Horvat's line.

The Toffoli trade seemingly solved the latter need, with just one problem — with Brock Boeser out long term, Toffoli will get a long look on the first line with Elias Pettersson and J.T. Miller, leaving Horvat still without a legitimate top-six forward on the right wing.

That's why the reports and rumours linking the Canucks with Wayne Simmonds of the New Jersey Devils were completely believable and understandable.The Canucks had reportedly attempted to sign Simmonds during the offseason and he has an added element to his game: sandpaper, grit, gravel, moxie, backbone, mettle, and intestinal fortitude. In other words, he'll punch a guy in the face sometimes.

The problem with Simmonds at this point in his career is that's all he provides. He's lost a step in his skating, limiting his ability to get in on the forecheck, and his hands and finish that once made him a 30-goal scorer have declined over the last couple seasons. This year, he has just 7 goals and 23 points in 59 games, putting him squarely in third-line territory.

When the Nashville Predators acquired Simmonds last year, sending the Philadelphia Flyers Ryan Hartman and a fourth-round pick. Simmonds was disappointing, managing just 4 points in 17 regular season games and playing just two playoff games, with no points, before getting injured by a puck to the knee.

If the Canucks were looking for bottom-six help, Simmonds might make some sense, but as a top-six forward, he's just not the right fit for the Canucks' up-tempo style. In addition, his acquisition cost might be more reflective of his reputation as a top-six forward rather than his current performance, and he also has a $5 million cap hit.

That latter issue is what appears to be keeping the Canucks from acquiring Simmonds. According to a report from Pierre LeBrun, the Canucks attempted to negotiate a trade with New Jersey, but couldn't find a way to fit Simmonds under the salary cap.

Hearing the Canucks tried the last few days on Wayne Simmonds in NJ but couldn’t make it work cap-wise, perhaps because Brock Boeser could return before the end of the regular season. So as of now, the Simmonds option not as likely for Van...

LeBrun speculated that the potential return of Boeser before the end of the regular season — something that is also a possibility for Josh Leivo — might complicate the Canucks' cap situation at the trade deadline, but Canucks fans on Twitter knew immediately who to thank for preventing a trade for Simmonds: Roberto Luongo and his cap recapture penalty.

Shoutout to Roberto Luongo and his cap recapture penalty for this one. https://t.co/hcszR6sznC

Looks like Roberto Luongo has made one final save for the Canucks https://t.co/tuUONwWUoD

Luongo on his way to save the #canucks like pic.twitter.com/59rlfEfCug

The cap recapture penalty was seemingly created exclusively to punish the Canucks for using a long-term contract and backsliding cap hit to lower Luongo's cap hit, to the point it was nicknamed "The Luongo Rule" in the media. When Luongo retired this last off-season, the Canucks were stuck with the bill: an approximately $3.033 million cap hit for three seasons.

Along with a highly-paid group of bottom-six forwards, the Luongo cap recapture penalty has pushed the Canucks close to the salary cap, with only a little relief offered via players on long-term injured reserve. As it is, the Canucks simply don't have room for Simmonds' $5 million cap hit.

The Canucks could make room for Simmonds by offering a roster player in return, as they did by including Tim Schaller in the Toffoli trade, by making a separate trade to cut salary, convincing the Devils to retain 50% of Simmonds' contract, or some combination of those three options. The trouble is that each of those options would cost the Canucks further assets.

Altogether, it's probably for the best that the Canucks don't have the cap room for Simmonds, not only because of the assets it would cost them that might compromise the team's long-term success, but also because Simmonds might not actually help the Canucks much in the short term.

Jim Benning reports that Brock Boeser “could be done for the year”
Feb 18, 2020 11:21 AM
Comments
We welcome your feedback and encourage you to share your thoughts on this story. We ask that you be respectful of others and their points of view, refrain from personal attacks and stay on topic. To learn about our commenting policies and how we moderate, please read our Community Guidelines.