The Canucks had better try to win every game this season 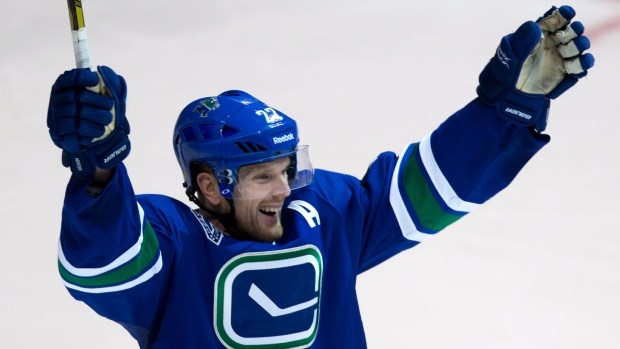 This Canucks season really could go either way, and if it happens to be a bad one, you can expect to hear a lot of fans clamoring for them to tank. I won't be among them.

I hate tanking. Just the idea of it. I hate the idea of just giving up on an entire season of hockey, of gutting your team and letting the leftovers run out the clock. They pay these guys the GDP of small countries, run their organizations with the seriousness and secrery of CIA operations, and hold entire cities hostage for their tax dollars come arena-building season, and they're gonna fritter away half a season so they can draft some teenager who might turn out to be good at the game they're not even taking seriously?

No. You go out there and you try to win every friggin' game. Because that's why we're all here.

I get the logic behind dismantling a team for parts and picks, of reloading for later. And I get cold, logical criticisms like this, from Ryan Beich at Vancity Buzz:

Last season the Canucks kept Brad Richardson and Shawn Matthias beyond the trade deadline, paving the way to lose them for nothing as unrestricted free agents. Both were kept in hopes of making the playoffs and winning a round.

They played decent for the remainder of year, but with the long term view in mind, they should have been traded for future assets at the trade deadline. That’s why trading the players below, which they didn’t do with Richardson and Matthias, should be seen as one short term step back in order to take two long term steps forward.

This is an absolutely correct opinion, in hindsight. But at the trade deadline, the Canucks were in a playoff spot. They thought they had a chance to win. They were never a favourite, but that's how all Cinderella stories start. Do you hate Cinderella?

I'm all for asset management. If the Canucks are terrible this season, and they know by the trade deadline that they won't be in the playoffs, then by all means, sell it all off. Your chances to win this season are over. Fine. Quit moping. Get out there, and get a head start on next season. Make plans. Make trades. Heck, trade every veteran anyone would want (save the Sedins, who should never be traded, because their legacy in Vancouver as freakish Swedish twins who did their own thing and hockey just got used to it, is far, far more important than winning). But until the Canucks are absolutely certain they can't win it all, I expect them to act like they still might.

And you do too. Remember that 1994 team you loved so much? No one expected them to do what they did. But it happened. Sometimes teams just put it together. You can't predict it, and it often makes little sense. Sometimes it makes perfect sense, and can be explained by a few simple numbers. But sometimes, it's just because the team somehow convinced themselves they were better after a big win. It's a shared delusion. ("Wow. We won. It's a miracle. Or maybe... maybe we're a team a destiny. Yes, yes, we're a team of destiny.") And then that shared delusion -- psychologists could call it folie a équipe -- propels the team to greater heights. Heck. It's sort of what's happening with the Toronto Blue Jays right now. (Not entirely. Much of their late season turnaround can be explained with numbers. But some of these guys are playing above their heads because they caught the madness.)

Well. If the shared delusion had happened to the Canucks last season, I'd have wanted them to have a big, strong, fast, middle-six winger, and fourth-line centre who can take a few draws, at least. So I was fine with Richardson and Matthias sticking around. The team might have needed them.

They didn't, of course, but it was fun to think they might. It's always fun to think your team might. It's never fun to know your team won't. And that's where tanking puts you. It stifles the element of possibility. It takes all the joy out of watching hockey, and while I know many of us writing on the Internet did that to ourselves when we took up this hobby, there are large segments of the fanbase who just want to watch a good hockey game between two teams that would both like very much to win. Taking that away from them is just a dick move.

I'm all for savvy asset management. If nothing changes this preseason, the Canucks could be waiving a few players that run the risk of being claimed. That's bad asset management, and considering Jim Benning can play a little fast and loose with his assets on trade calls (he practically gave Adam Clendening away as a 20% tip), the team should be making sure he has plenty to play with. They should be working to trade these players for something in return, if they can. I'm sure they are. And I'm sure it's hard to do at this time of year, when teams know they can often get the player they want for free by not trading for him.

I should also make clear that I'm not against trades that strengthen the Canucks for the future. Prospects are fun, especially in the preseason, when they're all new and shiny and they can distract from how dismal the hockey usually is otherwise. But the moment we get even a hint that they've withdrawn, rather than been eliminated, one has to wonder why we're all even here. If they're throwing in the towel, why not just follow their lead and check out completely until they're good again? Granted, that's what bandwagoners do, and the true fans hate bandwagoners, don't they? Because the real fans tough it out?