The Pacific Division is a hot mess right now, which suits the Canucks just fine 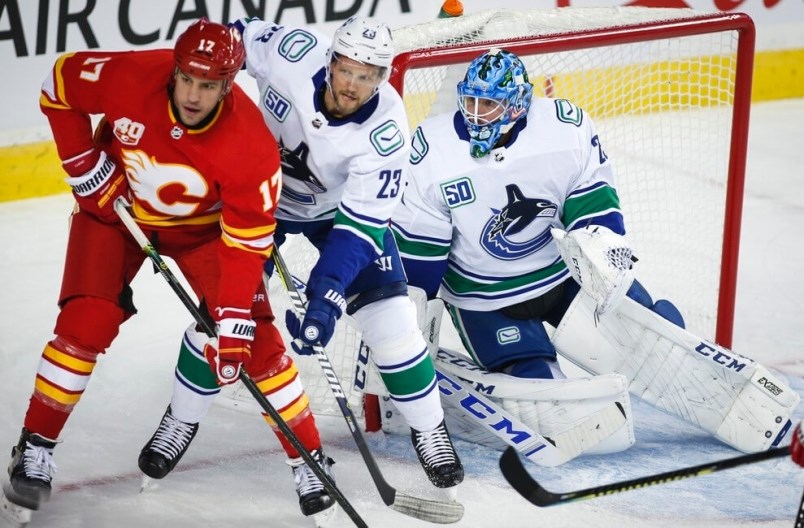 There are no good teams in the Pacific Division this season.

That may seem like a bold statement, but it’s just a simple declaration of facts. Even the top team in the Pacific right now, the Arizona Coyotes, has the 13th-best record in the NHL when you take into account games played. They’ve earned 58.2% of the possible points from their 49 games this season; five teams from the Metropolitan Division have a better record.

The teams from the Pacific that were supposed to be good have struggled. The Calgary Flames were the top team in the Western Conference last season with 50 wins, 107 points, and a dominant plus-62 goal differential. This season, they suddenly can’t find the back of the net — they’re 26th in the NHL in goals per game.

The San Jose Sharks were second in the Pacific Division last year. While they were expected to take a step back with age and the loss of several good players to free agency, they’ve instead been truly dreadful, with help from arguably the worst goaltending tandem in the league.

Then there’s the Vegas Golden Knights, who have arguably the best top-six forward group in the Western Conference, along with solid depth. They were supposed to be even better this season with a full season of brilliant two-way winger Mark Stone, who they added at the trade deadline last season. They’ve been sunk, however, by their defence and goaltending and sit outside the playoff picture.

All three of those teams have fired their head coach, though for the Flames it wasn’t related to his performance but racist comments from his past. The latest firing was Gerald Gallant from the Golden Knights, replaced by the coach the Sharks fired, Peter DeBoer, because NHL coaching is an ouroboros.

So, the Pacific Division has no good teams; what it has in abundance, however, is average teams. Some might even say “mediocre.” The Pacific Division’s top-five teams all inhabit the mushy middle of the NHL standings by points percentage, from the Coyotes in 13th to the Golden Knights in 19th.

As a result, the playoff race in the Pacific Division is tighter than Jake and Amy’s nups. For the Canucks, that means they have a significantly better chance of making the playoffs than if they were in any other division.

Right now, the Canucks are right behind the Coyotes in points percentage, second in the Pacific Division thanks to winning 9 of their last 12 games. Point projections from Micah Blake McCurdy of HockeyViz have the Canucks right in the mix with a projected 92.4 points by the end of the season.

Of course, with the Pacific Division so tightly-packed with average teams, the margin for error is slim. If the Canucks, who have been relatively healthy so far this season, see a rash of injuries and don’t have the depth to handle them, they could be in trouble. Or, if the other Pacific Division teams get their acts together, it could be tough for the Canucks to keep up.

Alternatively, maybe it will be the Canucks that hit a hot streak in the second half of the season and pull away from the rest of the division. That’s what’s wild about the Pacific right now: it’s nearly impossible to predict what might happen next.