Can J.T. Miller be like Naslund and the Sedins and play his best hockey after 28?

To trade or not to trade: one of the key questions is how will J.T. Miller perform on his next contract, which will kick in when he's 30 years old.

J.T. Miller is having an outstanding season for the Vancouver Canucks, with 20 goals and 57 points in 51 games so far. If he keeps scoring at this rate, he’ll finish the season with 31 goals and 89 points, which would be the most points by a Canuck since Daniel and Henrik Sedin in 2010-11.

In just three seasons with the Canucks, Miller has already cracked the franchise’s top 50 in all-time scoring.

Typically, a team will do their utmost to retain their leading scorer. There’s just one problem for the Canucks: Miller is 28.

That sounds a little ridiculous seeing it written out. 28 isn’t old, not even in sports, where the perception of “old” is a little bit more skewed.

Strictly speaking, the issue is not that Miller is old at 28 — it’s how old he will be when he starts his next contract combined with where the Canucks are as a team.

Age is a lot more than just a number

Miller will turn 29 in a couple of weeks, prior to the NHL trade deadline. At the start of his next contract, Miller will be 30. If Miller is looking for maximum term on his contract, that will take him until he’s 37 or 38, depending on whether he goes to free agency or re-signs with his current team.

28 might not be old but 37 and 38 definitely are, in sports terms. More than that, players typically decline significantly after the age of 30 — odds are, Miller will get a massive raise on his next contract based on how he’s performed over the last three seasons and then fail to live up to it.

That’s why age has to be a major factor in the decision whether or not to trade Miller. The Canucks are not likely to be a Stanley Cup contender in the next year or two, so it doesn’t make sense to accept the long-term pain of a declining Miller with a hefty cap hit for the short-term gain of his excellent play in the first years of his contract.

Typically speaking, NHL players tend to decline in their mid-twenties, with that decline only getting steeper around the age of 29 or 30.

That’s not a hard-and-fast rule, however — it’s an average. What if Miller isn’t average?

Miller's comparables from 26-to-28 include Naslund, the Sedins, and Ovechkin

What if instead of taking the average of every NHL player, we look more specifically at players who have produced at a similar rate to Miller?

I also made sure that the player’s “lesser” season wasn’t at age 28, so as not to catch players who had already started to decline.

This is obviously not a rigorous analysis, by any means. Binning data like this often excludes useful information and, in this case, I am looking for a pretty small bin of data. Still, it’s interesting to look at players with similar production to Miller and see what happened through the rest of their careers, just as an example.

Here’s the list of players I found that fit the criteria I was looking for:

Yes, that’s a pretty short list, but that’s what you get when you look for comparables to Miller: they’re all excellent players, with Alex Ovechkin in particular jumping off the page.

Some great players came just short of being included because they didn’t score enough over that three-year period from 26 to 28, like Martin St. Louis and Brad Marchand. Suffice it to say, Miller is in some rare company over the last couple of decades.

It’s also neat to see three Canucks on the list: Naslund and the Sedins. Naslund’s 28-year-old season is especially similar to Miller’s, particularly if Miller keeps up his scoring pace for the rest of the season. Miller is on pace for 31 goals and 89 points; Naslund had 31 goals and 87 points at 28.

So, we’ve established that Miller is among good company with his production over the last three seasons. What do these comparable players suggest might come next?

Here are the average points per game of these 17 players over their careers, starting from the age of 26. 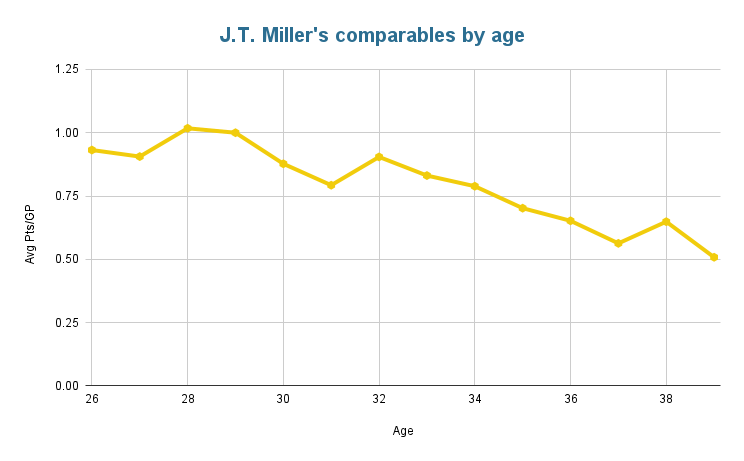 That’s nothing to be ashamed of — we could all wish to age so gracefully — but it’s a problem if a player is being paid like a franchise forward and taking up a significant percentage of your team’s salary cap.

Within this group of players, however, there is still a wide range. Ovechkin has obviously continued to score at an elite rate — at 36 years old, Ovechkin is having his best season in over a decade with 32 goals and 63 points in 51 games.

Ovechkin is a pretty unique case, of course. More typical is someone like Eric Staal, who dropped to 0.70 points per game at 30 and, apart from a resurgent season at 33 when he had a whopping 42 goals, mostly stayed in that second-line scoring range.

Naslund and the Sedins are exceptional in their post-28 performance

The three Canucks on the list are illustrative. Naslund had the best season of his career at 29, putting up 48 goals and 104 points in 82 games. He was two goals away from the Rocket Richard and two points from the Art Ross, was named a First-Team All-Star, won the Lester B. Pearson Award, and was a runner-up for the Hart Trophy.

None of that is surprising. It’s pretty normal for an elite player like Naslund to become a second-line player shortly after the age of 30.

What might Canucks fans miss out on if Miller is traded at 28?

Because the other possibility is that Miller is more like Eric Staal, Thomas Vanek, or Jamie Benn — very good players whose numbers dropped to second-line levels much more quickly after the age of 28.

The Canucks have to weigh all these possibilities because how good Miller is right now is not the issue: it’s how good he’ll be in the future.