What Canucks fans can look forward to seeing in 2020

2019 was pretty rough on Canucks fans. It saw the Canucks slide down the standings and finish well outside the playoffs.
Jan 2, 2020 7:33 AM By: Daniel Wagner 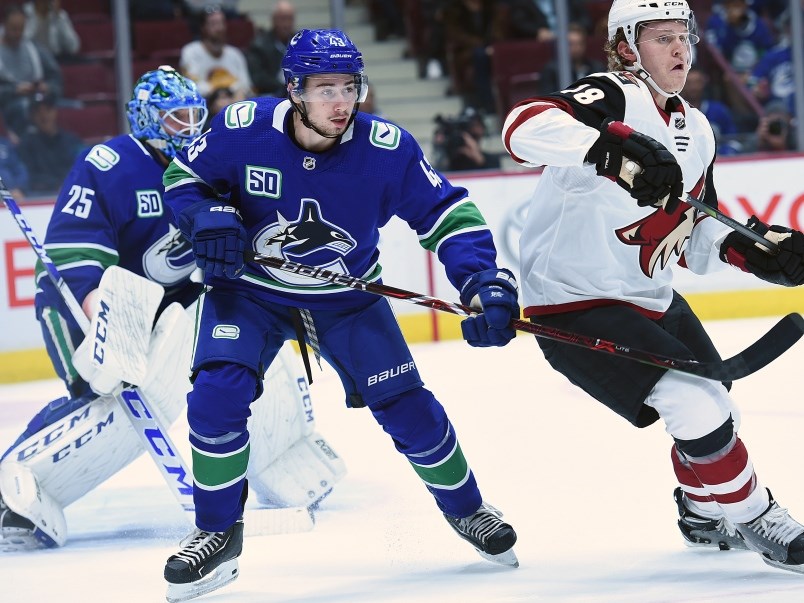 2019 was pretty rough on Canucks fans. It saw the Canucks slide down the standings and finish well outside the playoffs. All that fans could look forward to was the draft lottery, where once again three other teams were announced as winners, dropping the Canucks down a spot in the draft order.

There were also plenty of positives. Elias Pettersson won the Calder Trophy as rookie of the year in 2019. The draft, held in Vancouver, saw the Canucks select another exciting prospect in Vasili Podkolzin in the first round, then find some intriguing prospects like Nils Höglander on day two. Fans saw the debut of Quinn Hughes last season, then thrilled to see him kick off his rookie season in earnest in October.

What does 2020 hold for the Canucks and their fans? Let’s look ahead at what’s to come.

On January 4th, the Canucks will host their 90’s night, celebrating the players and teams from that era in a game, fittingly, against the New York Rangers. With the Canucks scheduled to wear their black skate jerseys, it will look and sound a lot like 1994 at Rogers Arena, hopefully with a better end result.

On January 24th, the NHL All-Star Skills Competition will take place in St. Louis, with the All-Star Game to follow on the 25th. Two years ago, Brock Boeser dominated the weekend, winning the Accuracy Shooting competition, then earning MVP honours in the game itself. Last year, Elias Pettersson surprisingly held his own in the Fastest Skater competition, stride for stride with the likes of Connor McDavid and Jack Eichel.

Who will star for the Canucks at the 2020 All-Star Weekend? Pettersson is heading to his second All-Star Game, but Quinn Hughes also deserves the All-Star nod. Dark horse candidate: Jacob Markstrom, if one of the two goaltenders named for the Pacific Division is unable to go.

In February, the main event is Sedin Week, as the Canucks will take an entire week to honour Daniel and Henrik Sedin, including their jersey retirement night on February 12th against an appropriate opponent: the Chicago Blackhawks. It’s sure to be an emotional night seeing 22 and 33 raised to the rafters; hopefully the Canucks take inspiration from the pre-game ceremony similar to how they performed after Alex Burrows was added to the Ring of Honour earlier this season.

Another big event in February is the trade deadline, with the Canucks aiming to be in a position to buy at the deadline instead of sell. That will be tough given their salary cap situation, so if the Canucks find themselves in the playoff race in mid-February, don’t be surprised if they look to shed some salary heading into the deadline.

Alternatively, the Canucks could find themselves sliding down the standings in February. While the pressure is on to make the playoffs, being a seller at the deadline might be the best option long term. Would the Canucks pull the trigger on a Jacob Markstrom trade or finally move Chris Tanev? The Canucks are hoping they won’t have to make that kind of decision.

The Canucks will have a few other theme nights and events in March: the 6th will be 2000’s night and the 27th will celebrate the 2010’s, while the Canucks For Kids Fund telethon will be on the 10th and Hockey is For Everyone night on the 25th. The big question is what will April hold for the Canucks?

Will the Canucks be back in the playoffs for the first time since 2015? Or will fans have nothing to look forward to but another draft lottery, hoping against hope that the Canucks land in the top-three in what is shaping up to be one of the best drafts in years?

The moves the Canucks made in 2019 made it clear that their aim is to make the playoffs in 2020. If they can pull it off, fans will be thrilled, but it will come with a new set of questions: can the young Canucks perform in the playoffs? Will they win a playoff round for the first time since 2011?

Hopefully, in hindsight, 2020 will be remembered as the beginning of a new era for the Canucks.

Big Numbers
56 - The Canucks record for most points by a rookie defenceman is the longest-held record in team history: it was set in their inaugural season back in 1970-71 by Dale Tallon with 56 points. That record could be in jeopardy, with Quinn Hughes already in the top-10 in scoring from a Canucks rookie defenceman before the season is half over.

66 - Hughes could even threaten the overall rookie record for scoring, set just last season by Elias Pettersson, who put up 66 points in 71 games. If Hughes can stay healthy, that record isn’t out of the realm of possibility. Also a possibility: a second-straight Calder Trophy for the Canucks.

Stick-taps and Glove-drops
A tap of the stick to Vancouver photographer Rich Lam, who made CNN’s list of the top 100 photos of the decade for his iconic photo of a young couple kissing on the street during the 2011 Stanley Cup riot.

The Utica Comets deserve a stick-tap as well, as they’re still among the top teams in the AHL this season. It helps that they have a legitimate NHL talent in Sven Baertschi, a high-end AHL star in Reid Boucher, and a lights-out rookie on defence, Brogan Rafferty.