Who is defending (or not defending) the lead for the Canucks?

“If we ever can find that potion, that cure in defending the lead, then I think you’ll see us winning an awful lot of games.”

Less than a minute after Elias Pettersson gave the Vancouver Canucks a two-goal lead on Monday night, the Vegas Golden Knights had responded, reducing the lead to one.

At that point, it seemed inevitable that the rest of the lead would be similarly erased and it was. It’s a script that Canucks fans have seen play out repeatedly this season. In fact, the Canucks have given up more multi-goal leads through 20 games than any other team in NHL history — and they haven’t even played 20 games yet.

Seven times this season, the Canucks have held a multi-goal lead and gone on to lose the game. The most through 20 games in NHL history up until this point was five, by both the 1985-86 Toronto Maple Leafs and the 1986-87 Los Angeles Kings.

This very much isn’t normal, even if it’s become normal for the Canucks this season. It’s been a particular issue in the third period, where the Canucks have been unable to close out games, to their head coach’s consternation.

Boudreau suggested that good teams might blow one or two third-period leads over the course of an entire season and made the point that if they had held those leads, the Canucks would have 12 or 13 wins right now.

“If we ever can find that potion, that cure in defending the lead, then I think you’ll see us winning an awful lot of games,” said Boudreau. “We’ve just got to find that little bit. I don’t think it’s 50 per cent better but if we’re 10 per cent better in a lot of these situations — which I truly believe we can get to — we’ve still got lots of time to be successful.”

It’s become clear, as Bo Horvat sits second in the league in scoring, that getting leads isn’t an issue for this group — it’s keeping them.

“It’s so hard to get a lead in the NHL,” said J.T. Miller. “Most nights, we’re doing a lot of good and proving that we can play against any team in the league for a certain portion. We’ve just go to find a way to grind it out for 60 and stop giving them easy goals. Or hard goals.”

But who exactly has been giving up those goals? Which players have been entrusted by Boudreau to defend the lead and have been failing to do so?

Ekman-Larsson and Miller get used the most with a lead

Let’s start with 5-on-5 ice time while defending a lead — any lead. 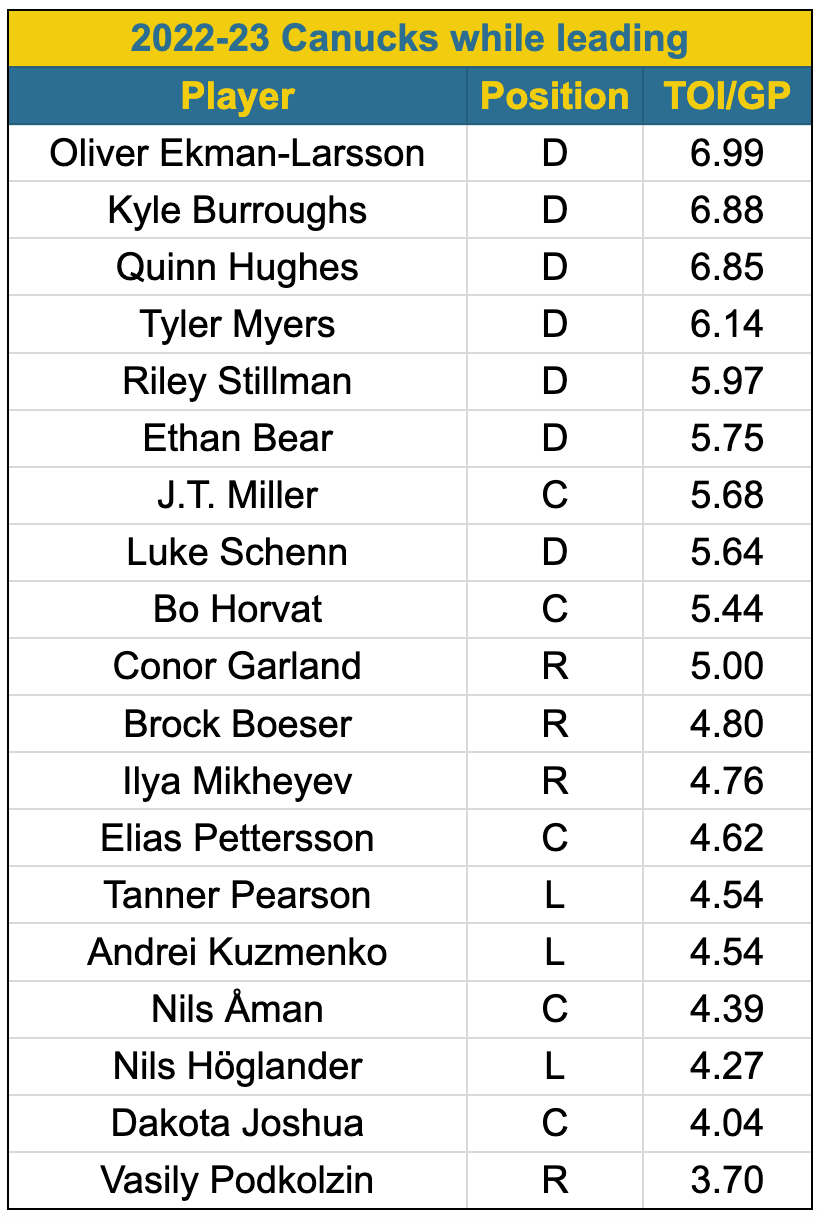 The go-to defenceman has been Oliver Ekman-Larsson, though Kyle Burroughs has also been heavily used while defending a lead when he’s been in the lineup. Quinn Hughes is close behind, followed by Tyler Myers.

Luke Schenn actually has the second-most total ice time while defending a lead, but falls to seventh in ice-time per game because he’s been in the lineup for every Canucks game, unlike the likes or Riley Stillman and Ethan Bear.

When up by just one goal, the usage skews a bit more towards Burroughs, Ekman-Larsson, and Myers, rather than Hughes.

The most heavily-used forward while defending the lead has been Miller, followed closely by Bo Horvat and frequent linemates Conor Garland and Brock Boeser.

Miller and Horvat have notably spent a lot more time defending the lead than Elias Pettersson, despite Pettersson’s strong two-way game and excellent work on the penalty kill. Boudreau said there’s one area of his game where he still needs to improve to get more work in the defensive zone and in a match-up role.

“He still can improve on faceoffs,” said Boudreau. “And we don't want him just to be a defensive stalwart. He's been doing great in his own zone but we use Bo, who's our best centreman at faceoffs, in our own zone. I think that makes more sense, but Petey's done everything we've asked him asked him and more: defending and offensively, there's not too many like him I think.”

Then there are the forwards who have been used the least to defend a lead: Nils Höglander, Dakota Joshua, and Vasily Podkolzin, with Sheldon Dries and Curtis Lazar not quite making the cutoff of minimum ice time to make the chart.

When up by just one goal, this becomes even more stark. Höglander and Podkolzin barely get used at all, while Miller and Horvat play as much, or more, than several of the defencemen.

So, that’s the usage, which adds up. Boudreau leans on his veteran defencemen and the combination of Miller and Horvat to defend leads. How has that worked out?

Stillman has been lit up when defending a lead 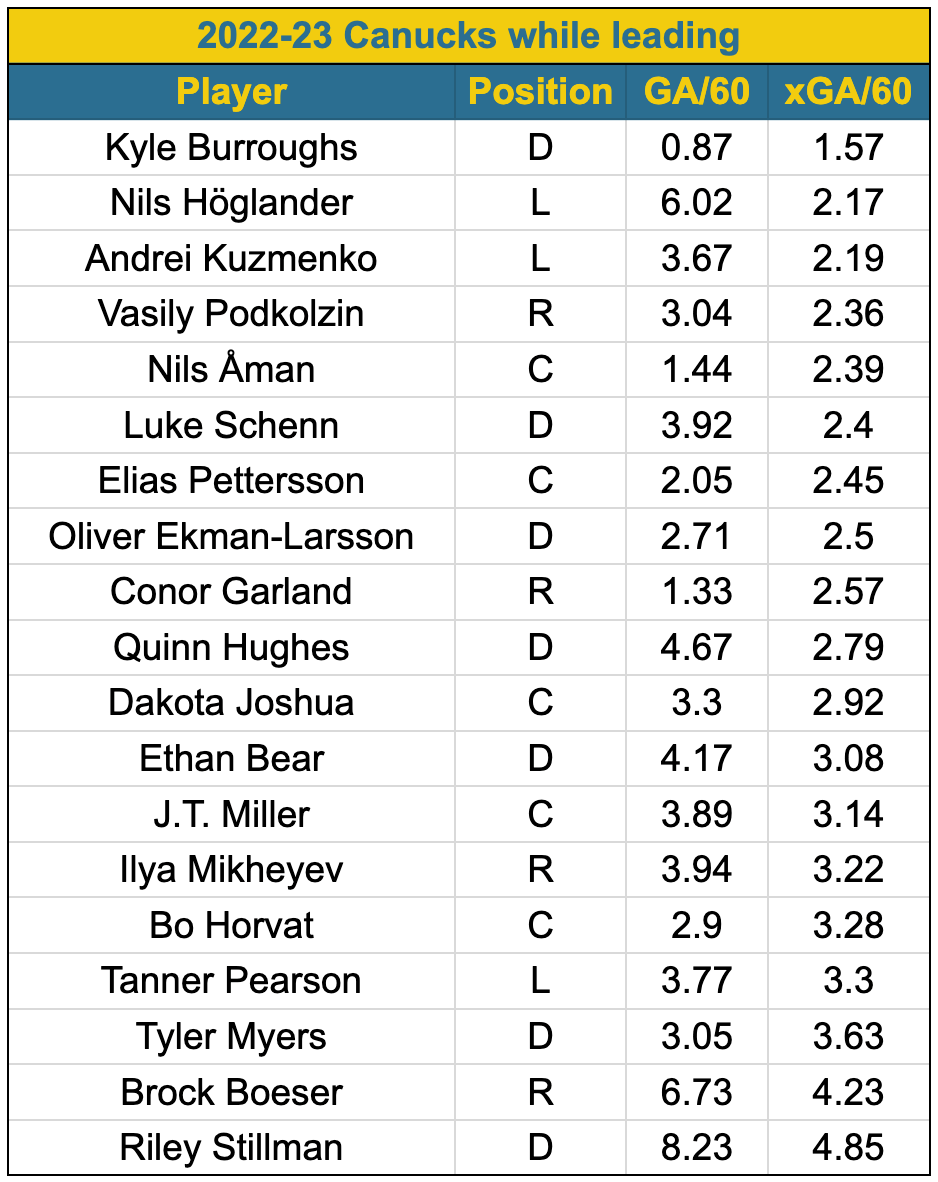 It quickly becomes apparent why Burroughs is heavily used while defending leads — he appears to be very good at it, with both the lowest rate of expected goals against and actual goals against on the Canucks. That makes it even more baffling that he hasn’t been able to get into the lineup, particularly when you look at the bottom of the list at who has been the worst while defending a lead: Riley Stillman.

Considering the Canucks’ biggest problem is defending leads, there’s not much justification for keeping Stillman in the lineup ahead of Burroughs at this point.

Brock Boeser has also severely struggled at defending a lead — it was his man, Alex Pietrangelo, who scored the game-winning goal on Monday night — which stands in contrast to the way his two-way game has improved over the past couple of seasons.

There are some interesting results at the top of the chart as well. Höglander looks good by expected goals, but has been on the ice for a high rate of actual goals, which likely explains why Boudreau hasn’t used him much in that role. He’s definitely had his defensive lapses, even if his overall puck possession game has been strong.

Then there’s Pettersson, who has had better results than Horvat and Miller while defending a lead. This chart looks purely at goals against, but Pettersson has also pushed offensively to extend leads.

The Canucks have out-scored their opponents 8-to-3 with Pettersson on the ice at 5-on-5 while defending a lead. That’s the best on the Canucks by a wide margin.

There’s a strong case to be made that Pettersson should see more ice time while defending leads, even if he’s not the strongest in the faceoff circle. For what it’s worth, Pettersson has a 48.5% faceoff percentage in the defensive zone this season, which isn’t all that bad.

Who should be defending a lead?

Plotting the time on ice and expected goals against each other gives us the following chart. 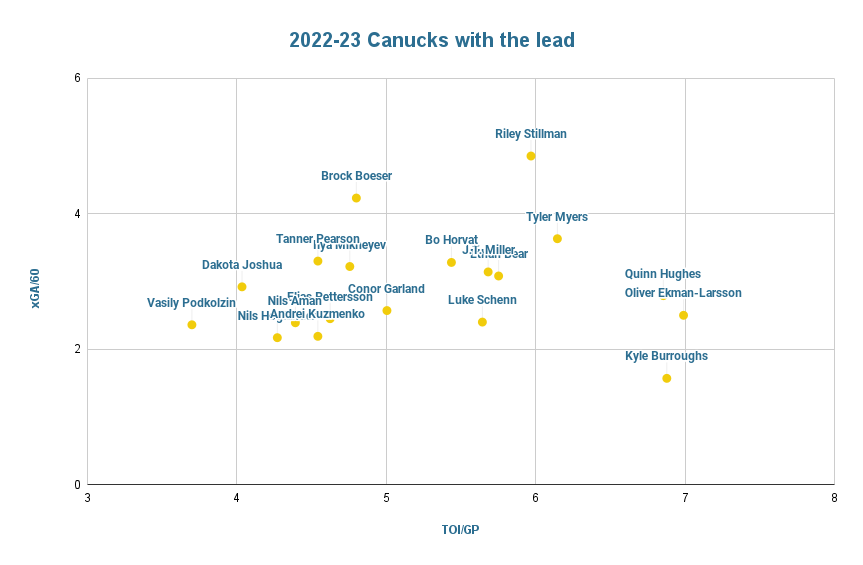 The further to the right, the more ice time per game a player has had while defending a lead. The higher up on the chart, the higher the rate of expected goals against.

The gap between Stillman and Burroughs could not be more stark.

For defencemen, Quinn Hughes and Ekman-Larsson have been okay, as has Schenn, who could be used a bit more. Burroughs should be in the lineup, period.

As for forwards, it seems clear that Pettersson should be used more in a defensive role — he's capable of turning defensive zone starts into offence with his ability to transition the puck up ice. Andrei Kuzmenko hasn't been too shabby either, so that's a duo that could be leaned on more heavily, with either Podkolzin or Höglander on the wing.

It looks like Nils Åman can also be a reliable option when defending a lead, same with Lazar who didn't make the ice time cutoff for the above chart. If they and Pettersson can be used to take some of the burden off Miller and Horvat, the Canucks might have more luck hanging onto leads.

I Watched This Game: Gonzo third period sees Canucks cough up another multi-goal lead to Vegas
Nov 22, 2022 1:08 AM