Why the Canucks' offensive zone time isn’t leading to goals

The Canucks may spend a lot of time in the offensive zone but it's all on the perimeter.

During the Vancouver Canucks’ game against the Montreal Canadiens on Monday, the broadcast showed a surprising statistic: the Canucks are among the league leaders in puck possession in the offensive zone.

The statistic came courtesy of Sportlogiq, a Montreal-based analytics company. According to the graphic on the Sportsnet broadcast, the Canucks average 7 minutes and 34 seconds of offensive zone possession per game. That may not seem like much, but it’s second in the NHL, apparently, behind only the Edmonton Oilers. 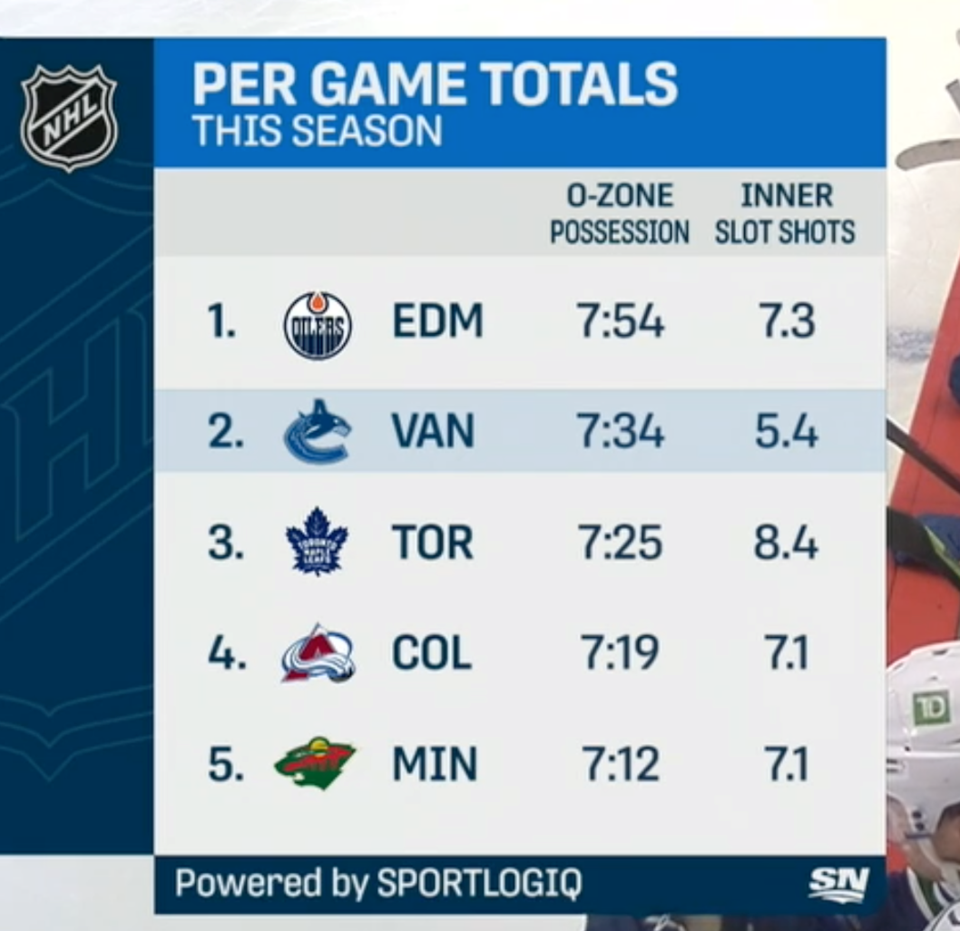 The other teams in the top five are among the highest-scoring teams in the league, such as the Oilers, Colorado Avalanche, and Minnesota Wild, as well as the Toronto Maple Leafs, who had a rough start to the season but have been on fire offensively over the last month.

That’s good company for the Canucks to be keeping but they’re definitely not scoring like those teams. In fact, the Canucks are 29th in the NHL in goals per game.

There’s a lot of context missing from these numbers, as is typical with proprietary black-box analytics. It’s unclear how they measure “offensive zone possession” — how possessed does the puck need to be? — whether an “inner slot shot” is a shot on goal or any shot attempt, and how they define the slot.

Are these stats at 5-on-5 or in all situations? If it’s in all situations, then it’s misleading, as the Canucks have spent more time on the power play than any other team in the NHL. But assuming it’s just at 5-on-5, there are other factors to consider.

For instance, the Canucks have spent the third-most time in the NHL trailing, averaging 27:48 per game playing from behind. Teams tend to play more conservatively with the lead and might collapse back to the net, giving up more offensive zone time but fewer opportunities to shoot from dangerous areas.

Still, the Canucks are up there with some pretty good teams and, while Sportlogiq’s data is prohibitively expensive for small-time bloggers like yours truly, it largely jibes with the publicly available data, which is more open with its definitions and methodology.

The Canucks' shot quality is non-existent

According to Natural Stat Trick, the Canucks are 13th in the NHL in shot attempts per 60 minutes at 5-on-5. That’s slightly above average, though they fall to 18th when you adjust for score because of all the time they’ve spent trailing.

Either way, they’re right around league average when it comes to shot quantity. That belies the offensive zone possession time statistic from Sportlogiq — the Canucks are far from second in the NHL in corsi — but it also shows that time of possession might not be the most useful statistic.

While corsi — shot attempts for and against — is frequently used as a proxy for puck possession, it can be more useful to think of corsi as effective puck possession. If your possession time doesn’t lead to shots and chances, then what’s the point? Literally, you don’t get any points.

As soon as you look at any statistic that takes shot quality into account, the Canucks sink like a stone.

In expected goals for per 60 minutes, the Canucks are 27th in the NHL. It’s easy to figure out why: they’re 29th in the NHL in high-danger chances per 60 minutes. They simply do not create chances in the slot.

We can see this visually as well, looking at the Canucks’ heatmap of unblocked shot attempts from HockeyViz. 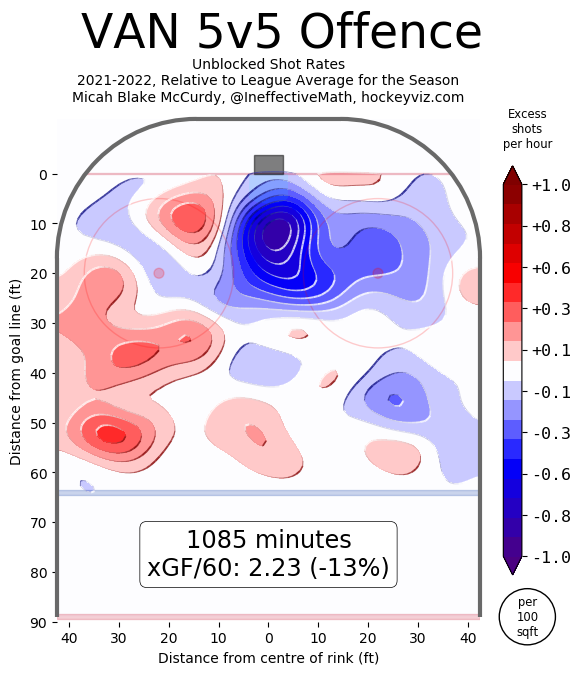 So, that lines up with the Sportlogiq data. But why can’t the Canucks get high-danger chances?

Canucks struggle to create off the rush

Creating chances from the slot is easier said than done. Teams are well aware it’s the most dangerous area on the ice and devote a lot of time and effort to defending it. There are, however, a few key ways to get to those areas.

One is to create chances in transition: breakaways and odd-man rushes that allow you to exploit  your numerical advantage to get to dangerous scoring areas with some puck movement to get the goaltender moving as well.

The Canucks are one of the worst teams in the league when it comes to creating chances off the rush, also according to Sportlogiq data. A big reason why is that most of their defencemen are poor when it comes to transitioning the puck up ice. Quinn Hughes and Oliver Ekman-Larsson can move the puck but when they’re paired with defencemen that struggle to move the puck, opposing forechecks can key in on them and force the puck to the poorer passer.

It’s likely there’s a systems element to the lack of rush chances: the Canucks generally try to stay away from a run-and-gun game that looks to transition the puck aggressively up ice for fear of giving up transition chances against. It’s for good reason: the Canucks tend to end up on the wrong side of the score when the game opens up that way.

Teams also look to get chances in the slot by cycling the puck in the offensive zone. The idea is to create a defensive breakdown for the opposition through puck and player movement, then take advantage of that breakdown to create a dangerous chance.

Daniel and Henrik Sedin were masters of this, revolutionizing in-zone offence with the way they controlled possession along the boards with short passes before suddenly finding a wide open player in the slot.

The Canucks do have forwards who have the requisite skill to play this type of game but maintaining an offensive zone cycle and creating chances off of it requires more than the forwards: it requires defencemen who can hold the blue line, execute a well-timed pinch down the boards, and move the puck quickly. Moving the puck from low to high and vice versa is essential for opening up an opposing team’s defence to create chances in the slot.

Apart from Hughes and Ekman-Larsson, the Canucks defence are deficient at keeping the cycle going. They either lack the puck skills to make plays under pressure or pinch down the boards at the wrong time, which can lead to dangerous chances the other way.

It’s not that forwards like Elias Pettersson and Brock Boeser aren’t struggling — they definitely are — but they’re not solely at fault for the team’s struggles to create dangerous chances off the cycle. Controlling the puck down low for a long time doesn't help if as soon as the puck goes to the point it ends the possession.

Pucks and bodies to the net is a low-percentage play

Another way to create chances from the slot is to do so indirectly by taking shots from the point to create tips and rebounds. When a team can’t get the puck into the slot for a clean chance in transition or off the cycle, creating one via a point shot is sometimes the only option and it’s been the go-to option for the Canucks all season.

The Canucks have said as much in press conferences, repeatedly talking about the need to simplify to get out of their funk by getting both pucks and bodies to the net to try to score some ugly goals. They’re not as pretty as a passing play off the rush or a well-executed cycle but they all look the same on the scoresheet, as they say.

“I know we had a lot of possession time,” said Tyler Myers after one particular loss. “Can we find ways to get to the net, get pucks to the net, get greasy goals? I think we can get a little bit better at that, for sure.”

Likewise, rebound chances are some of the most dangerous chances in hockey, as a goaltender is potentially out of position from the original save and just getting the puck on net can be enough to score.

Canucks get more shots from defenceman than most NHL teams

The Canucks’ predilection for point shots is evident from what they’ve said publicly, but it also shows up in the numbers.

Of the team’s 1022 shot attempts this season, 410 have come from a defenceman. That’s 40.12% of their shot attempts coming from defencemen. That might seem reasonable — after all, the majority of the shots are still coming from forwards — but it’s actually the fourth-highest percentage in the NHL. The majority of teams in the NHL get a lot more of their shots from forwards.

The Canucks also have the second-most shots coming from tips and deflections this season behind only the Anaheim Ducks.

So, it seems very obvious what the Canucks are doing. They struggle to create chances in transition and off the cycle, so they’re resorting to their next best option. It’s just not working very well because it’s the least efficient method of creating chances from the slot. It’s not easy to tip a point shot, especially while battling a defenceman in front of the net, and sometimes a goaltender just refuses to give up a rebound.

Far too many promising possessions in the offensive zone end with a point shot from a defenceman that is unlikely to result in a goal. Tucker Poolman, Travis Hamonic, and Luke Schenn all have career shooting percentages under 4%. Hughes is only slightly better at 4.7%.

So, when the Canucks’ forwards can’t get a tip or deflection on one of those shots, it’s all too easy for opposing goaltenders to make the save.

In other words, Canucks' offensive zone possessions end at the blue line in more ways than one: with the puck escaping the zone or with a point shot that has little chance of going in.

Clearly, the Canucks’ strategy of point shots and prayer isn’t working. The Canucks need to find a way to get to the inside on a more regular basis; otherwise, all the offensive zone time in the world won’t lead to more scoring.