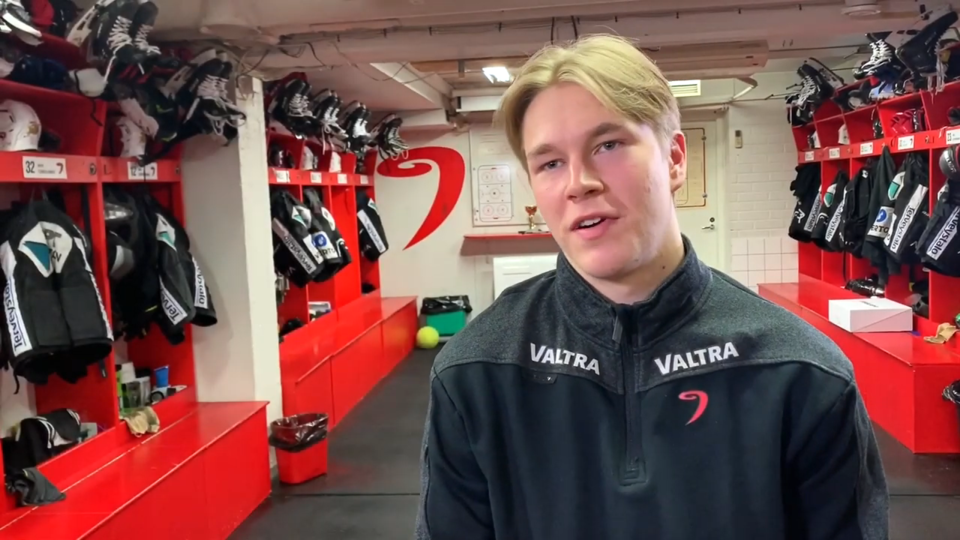 Joni Jurmo was taken in the third round of the 2020 NHL Entry Draft by the Vancouver Canucks. photo: JYP/YouTube

Jim Benning said the first day of the 2020 NHL Entry Draft was hard to take without a first round pick.

“I’ve been doing this for 28 years, I can’t remember another year in all the years I’ve been working that we didn’t have a first round pick,” said Benning. “That was tough to sit there and there’s players that were falling in around where we would have picked that we really liked and there’s nothing you can do about it, so that was hard.”

When the Canucks finally got their first pick in the third round, however, they grabbed a player with some serious upside: a Finnish defenceman with a rare combination of size and speed named Joni Jurmo.

“With Jurmo, we see a big kid that can really move and is still a bit raw, but he has some really good upside,” said Canucks scout Todd Harvey, who ran the draft this year. “He's got power in his game and he's able to skate that puck, and create space for himself to be able to lug that puck out of the zone.”

The transition game in the NHL is more important than ever, so to have a defenceman at 6’4” that can skate as well as he does and quickly move the puck up ice is an exciting proposition. Most Canucks fans, however, haven’t had the opportunity to see Jurmo play and how he can move the puck.

Thankfully, prior to the draft, Will Scouch took the time to break down Jurmo’s game in detail, including a ton of clips of Jurmo’s game. The resultant 16-and-a-half minutes are well worth watching to get a better feel for Jurmo’s style of play and his potential.

For those unfamiliar with Will Scouch and the Scouching Report, he does analytics for the NHL draft as well as extensive video scouting. Every year, he does a few dozen video breakdowns of specific prospects heading into the draft, comprehensively addressing their strengths and weaknesses.

Fortunately for Canucks fans, one of those video breakdowns was on Jurmo.

Scouch uses five broad categories to rate players: Think, Move, Get, Pass, and Shoot. These categories are broad for a reason. Instead of just focusing on a player’s skating, for instance, Move is more about how a player gets around the ice, particularly with the puck on their stick, and how they control the puck while on the move. It’s about hands in combination with skating instead of assessing both separately.

The whole video is worth watching, particularly for the clips that highlight different aspects of Jurmo’s play. It really gives you a feel for just how fast he can move with the puck, along with some of the warts to his game that caused him to drop down to 82nd overall. It definitely provides more context for the word that continually comes up around Jurmo: “raw.”

“He is raw with all capital letters,” says Scouch early in the video when talking about the Think category. “I think for Jurmo there’s a lot of work that needs to be done and you’re going to need to be patient with him, especially defensively moving forward if you really want to unlock the potential that he has.”

The question for Jurmo, and the reason most teams didn’t have him ranked higher on their draft boards, is whether he can put his entire game together to effectively use his fantastic physical tools. Scouch calls him “a long-term project,” but there’s legitimate potential for a top-four, puck-rushing defenceman that can play effectively at both ends of the ice.

The highlight of Jurmo’s game is his ability to move with his “absolutely gifted set of feet,” as Scouch puts it.

“This, to me, is where at times things get spectacular,” says Scouch. “Jurmo may very well be one of the best pure skaters in this draft class for defencemen. Especially when you couple that with his size and his skill that he has with his hands, there’s a fantastic profile to work with here just on his raw tools.”

That skating is everything for Jurmo, using it to keep a tight gap defensively, but using it even better with the puck on his stick.

Ultimately, Scouch had positive things to say about Jurmo in all five categories, rating Jurmo nothing lower than a 2 — it’s a 1-4 scale, with 1 being the highest — in each category, just criticizing his consistency in using his legitimate talent.

“He was one of the more exciting players that I’ve tracked this year,” says Scouch, “especially once he got the puck on his own stick in the defensive zone with his fast forwards ready to forecheck with him and he burned through the neutral zone with control of the puck the whole way. Not a lot of defencemen out there can do that at the speed he does it.”

“To me, he has all the tools to become a potential steal of a defenceman outside of the first round this year,” he concludes.

The Canucks draft Jackson Kunz in the fourth round out of Minnesota high school hockey
Oct 7, 2020 1:56 PM

Canucks' final pick of the 2020 NHL Entry Draft is a Persson of interest: Viktor Persson
Oct 7, 2020 9:01 PM
Comments
We welcome your feedback and encourage you to share your thoughts. We ask that you be respectful of others and their points of view, refrain from personal attacks and stay on topic. To learn about our commenting policies and how we moderate, please read our Community Guidelines.