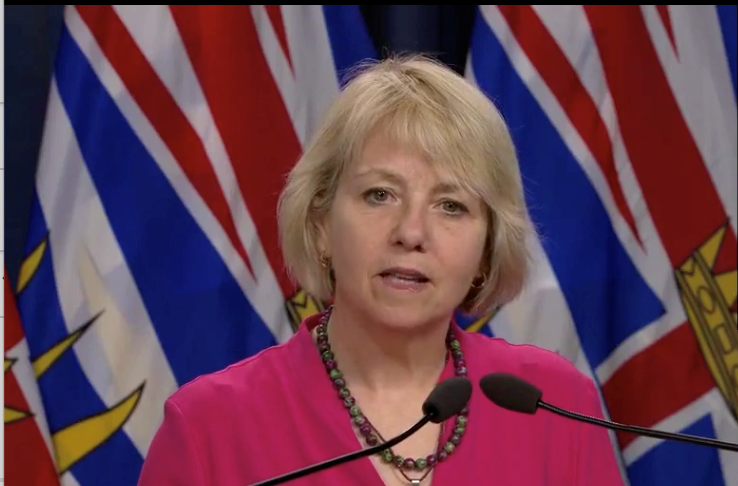 Dr. Bonnie Henry addresses the media from Victoria, B.C. on May 23. | Screenshot

According to provincial health officer Dr. Bonnie Henry, there are 890 cases in Vancouver Coastal Health (VCH), 1,244 in Fraser Health, 127 on Vancouver Island, 194 in Interior Health and 62 in Northern Health.

There have been no new health-care outbreaks within the past 24 hours, while the outbreak at Lions Gate Hospital has been declared over. In total, 14 long-term care or assisted-living facilities and two acute-care units continue to have active outbreaks.

Saturday was "the first day in some time" that the province did not have any new cases to report amongst residents of long-term care facilities, noted Henry.

Public health teams continue to provide support for community outbreaks at the Oppenheimer Group, those in the poultry sector, at the federal correctional institution in Mission and with those connected to the Kearl Lake plant in Alberta.

There was one new community outbreak reported Saturday, at Nature's Touch, a frozen food processing plant in Abbotsford. There are currently five people associated with that outbreak who have tested positive for COVID-19. "This one was caught relatively early," said Henry, adding that while the plant was not ordered to close, it will be closed over the weekend during which proper protective procedures will be implemented. An investigation is ongoing.

Henry announced have been two new deaths on Saturday, for a total of 157 fatalities in the province. Both were long-term care residents in the Fraser Health region.

There are currently 39 people receiving acute care in hospital. Eight people are in critical care.

As of May 23, there are 303 active cases of COVID-19 in the province, while 2,057 people, or 82 per cent of people who tested positive in British Columbia, have recovered.

"As we continue to find new outbreaks in the community, this gives us a chance to pause and think," said Henry. While she noted that British Columbians have "taken it slowly" during the first week of Phase 2 of B.C.'s reopening plans,  "these outbreaks remind us, gatherings of any kind increase the risk of transmission, and our public health surveillance needs to continue and will continue to quickly identify new cases, and to find those they've been in contact with."

Yesterday, Henry amended B.C.'s order on public gatherings to include gatherings of vehicles, as well as individuals. "I know that was a challenge for some people," she acknowledged, "but really, this is the time that we need to be careful. Even though 50 cars may seem like a small amount and it is a less risky environment, we know that if we get people together there will be several people in a vehicle, the chances of more contact, meaning the spread of this virus, is very real right now."

She continued, "as we're in this transition period, and we're watching very carefully as businesses are opening, as we're having more contacts, we need to continue to do that in small numbers."  The reasoning behind this continued ban on gatherings, explained Henry, is to prevent explosive outbreaks amongst large groups of people, and, in the event someone contracts COVID-19, to make it easier for public health officials to efficiently track down others who that individual may have been in contact with.

"To be clear, gatherings of any kind are a risk right now, and a concern for those two very important reasons," she said.

“The federal government spoke to the use of non-medical masks or cloth face coverings in public settings. When it is difficult to keep a safe physical distance for an extended period of time - for example, when you are on transit - this is a good way for you to protect those around you," said Henry.

“We have to remember that face coverings keep our droplets in and don’t prevent transmission from others. The best ways for us to stay safe is to wash our hands, maintain a safe physical distance from others and keep our ‘rules’ for social interactions top of mind."

Earlier this week, many businesses that had been closed due to the pandemic can "begin the process of safely reopening." The public health officer's revised orders can be found on the province's website.

As the province "cautiously" moves toward its second phase of reopening with a gradual easing of restrictions, Henry warned that "we have to move carefully, and we have to move thoughtfully."