Some countries even saw an increase in air pollution of up to 25 per cent.

Just over a year ago, coronavirus (COVID-19) lockdown measures forced schools and shops to close around the world. Travel ground to a halt, and economies slowed down as many people worked from home or did not work at all.

And these measures had a dramatic impact on air quality - but not every region saw a decrease in pollution, explains a new study from the University of British Columbia.

The study is published in the Environmental Research Letters and finds that lockdown measures reduced air pollution globally by "45 per cent domestically and 35 per cent internationally on average during the first wave of lockdowns."

However, some regions did not see a decrease. Parts of South America, Asia and the American Midwest actually saw an uptick in air pollution based on their economic activity.

“It’s a piece that shows us how complicated the economic activity and the environment relationship is,” says UBC Faculty of Land and Food Systems Assistant Professor Dr. Frederik Noack. “It’s really dependent on the development level and composition of the economy.”

While lockdown can reduce air pollution from traffic and industry, the study finds that it can also increase pollution from residential sources such as heating at the same time.

Noack adds that these findings suggest that policies to curb air pollution should take all economic sectors and the response of people to these policies into account including a shift to more polluting activities.

The study also shows how industry-heavy countries like Canada, "which saw a 30 per cent decrease in air pollution between March to August 2020, could learn some environmental lessons from last year’s slowdown in mobility and industry."

Some countries with increases of up to 25%

This study linked detailed data on lockdown timelines with satellite pollution (PM2.5) data from 162 countries, factoring in times where lockdown restrictions eased. The analysis spanned November 2019 to August 2020 capturing medium-run environmental impacts, since most lockdowns were imposed in March or April. 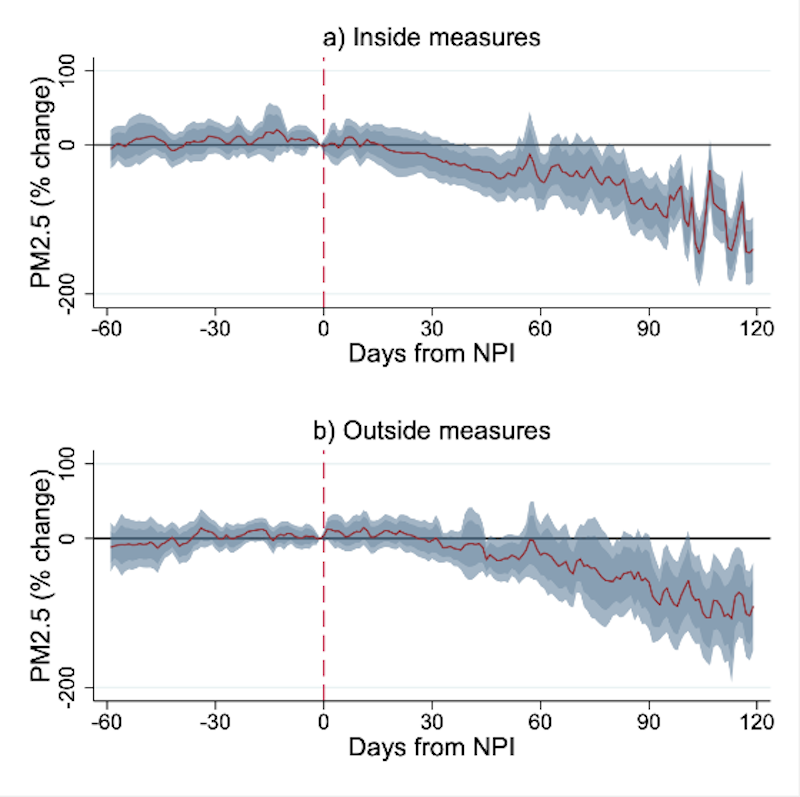 Most changes in air pollution started to be seen after a lag of about one to two months after lockdown measures were set in place. The biggest reductions in air pollution were seen 90 to 120 days into lockdown.

While the study focused on global urban centres, they found significant differences in air pollution trends from country to country.

Some countries even saw an increase in air pollution of up to 25 percent.

“It’s really about the source of the pollution here,” says Noack.

The results of the study also shed light on how to build more sustainable economies where pollution can be curbed in less economically costly ways other than a full economic shut-down.