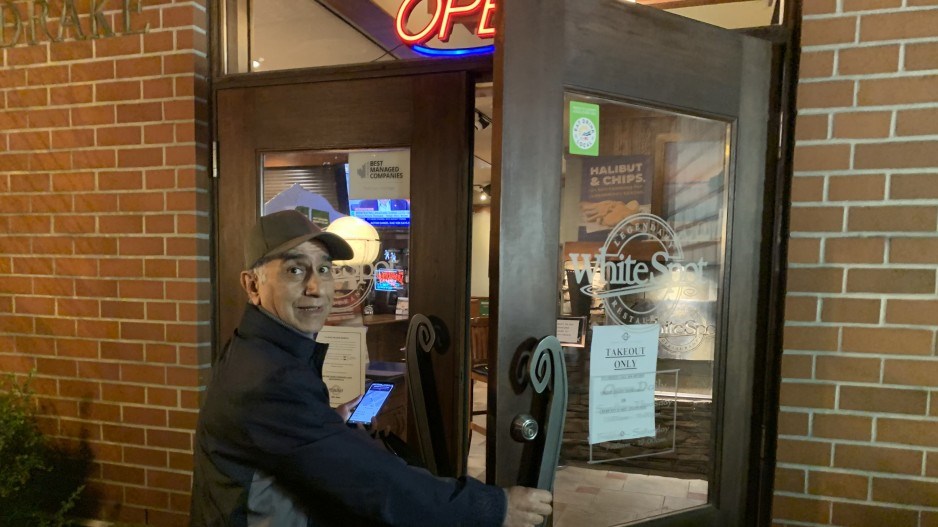 An Uber Eats delivery driver walks into the White Spot at the corner of Granville and Drake streets that is only open for take-out and delivery. Photo Glen Korstrom

What happened: White Spot owner Ron Toigo told Business in Vancouver that he is waiving all royalty fees that franchisees would otherwise have to pay. On a case-by-case basis, he is also waiving lease payments owed to the company during the shutdown prompted by the COVID-19 pandemic. He continues to pay salaried staff "for the foreseeable future," is paying hourly staff for any shifts previously booked and has laid them off so they can get federal assistance.

Why this is important: It shows how large hospitality chains are handling the business slowdown spurred by the pandemic, and it could be a template for others.

Toigo, who also has ownership stakes in the Vancouver Giants, real estate projects and other ventures employs about 4,000 people, with more than 90% of them based in B.C.

"I don't know anybody who can comprehend what the damage to the economy is going to be, but it is going to be something that nobody has ever seen in their lifetime," Toigo said. "It's going to have to be something drastic. If this goes on for a long time, we're all really in big trouble but right now we're probably a little more resilient than some of our franchisees so we're going to do what we can do to get through this together."

He said the industry was not in great shape before the COVID-19 pandemic started to prompt governments and health officials to take actions to slow the spread of the disease. Provincial health officer Bonnie Henry has ordered that all restaurants in the province close, except to offer take-out and delivery services.

The malaise in the industry before the pandemic was partly created because of additional expenses and taxes laid on, such as the B.C. government shifting healthcare premiums to employers from individuals over a two-year period, Toigo said. The government has also been steadily raising the minimum wage. The next hike to the minimum wage is set to be a 5.4% rise, to $14.60, on June 1, and Toigo said that postponing that hike is "the minimum they should do." The B.C. government is set to explain how it plans to help British Columbians financially during this crisis tomorrow (March 23).

One change the provincial government announced yesterday is that restaurants are allowed to sell all types of packaged alcoholic beverages to customers who order take-out or delivery meals until July 15. Meals must be ordered and delivery people must have a Serving It Right certificate among other conditions. Mixed drink sales are not allowed.

Restaurants Canada vice-president of Western Canada Mark von Schellwitz told BIV last week that this was one initiative that he was pushing for, because profit margins tend to be higher for alcohol and the sales could mitigate other lost sales.

Toigo said that the federal government's $82-billion emergency bailout plan is "not even close" to what is required, and Prime Minister Justin Trudeau this morning said that the $27 billion in direct aid and $55 billion in deferred taxes is "only a very first step " and that more help would be on the way.

"We're looking now at what those next steps are to ensure that our economy is able to pick up again once we're through this, whether it takes weeks or months [and] it is likely to take months before we're fully through this," Trudeau said in his morning address. "That's why supporting directly to Canadians, support directly to small businesses, to large businesses, to industry, to the various sectors that will be much harder hit – these are things we are busy looking at."

Toigo is also not impressed with the City of Vancouver's initial move to provide a two-month grace period on paying property taxes.

"How about rolling back the property taxes to where there's some sanity?" he said. "These [property tax rates] are so out of control. They are ruining a lot of businesses."

"If there is ever a time for government to step up, here it is," he said. "The government is going to have to really get involved. It's all about saving people's jobs. People don't want handouts. They want the ability to go to work and have a paycheque and take care of their families themselves."