Normal Christmas is 'right out of the question,' says Trudeau

Prime Minister Justin Trudeau offered an urgent plea to Canadians warning that if social contacts are not reduced, and reduced now, the transmission of COVID-19 could reach overwhelming levels.
Nov 21, 2020 8:20 PM By: Stefan Labbé 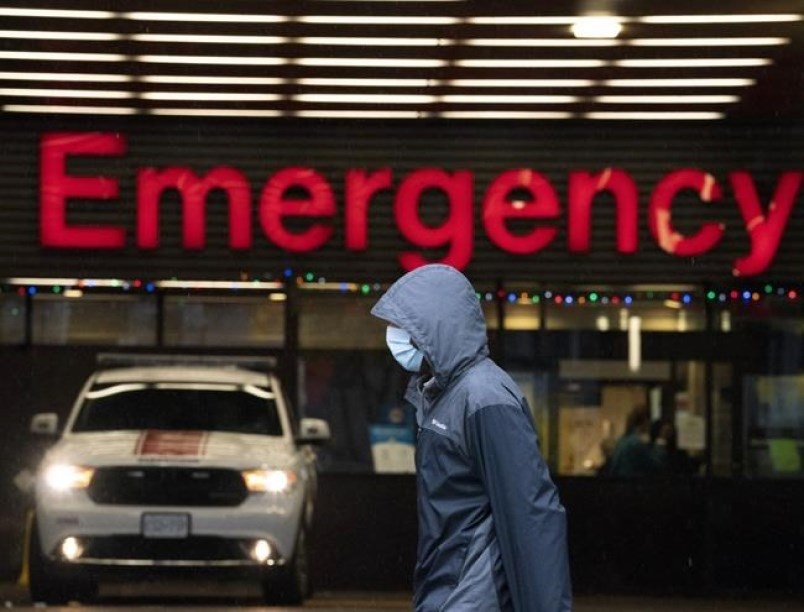 A person wears a protective face mask to help prevent the spread of COVID-19 as they walk past the emergency department of the Vancouver General Hospital, in Vancouver, B.C., Wednesday, Nov. 18, 2020. Federal opposition leaders have been given an advance look at grim new projections for the spread of COVID-19 in Canada. THE CANADIAN PRESS/Jonathan Hayward

Prime Minister Justin Trudeau offered an urgent plea to Canadians yesterday warning that if social contacts are not reduced, and reduced now, the transmission of COVID-19 could reach overwhelming levels.

Earlier on Friday, Canada's chief public health officer Dr. Teresa Tam issued a sobering warning: If contacts increase above current levels, Canada could be careening toward a worst-case scenario of 60,000 cases per day by the end of the year.

That would be a twelvefold increase from the current level of around 5,000 cases per day, which is already putting pressure on health-care systems in some regions.

At current rates of contact, officials predict that Canada is headed toward a surge of more than 20,000 cases per day by the end of December.

Tam said cases increased about 15% from last week. There's also been troubling growth in the number and size of outbreaks in high-risk communities and settings such as long-term care homes, health-care facilities and Indigenous communities.

Just what the spikes in COVID-19 cases will mean for families during the holiday season is not yet set in stone, said Trudeau, and with still more than four weeks until Christmas, what kind of limits will remain in place or be extended by late December remains an open — and regional — question.

On Thursday, B.C.’s provincial health officer Dr. Bonnie Henry escalated measures to stem the transmission of COVID-19 in a new order covering the entire province. That came on the back of a two week targeted shutdown of certain businesses and a limit on social interactions to a single household.

The province-wide measures, in effect until Dec. 7, also come with a new mask mandate for indoor retail spaces and a strong recommendation to limit movement to essential travel only.

But just how that will put a dent in the province’s surging daily caseloads — now expected to double roughly every two weeks — is yet to be seen.

Earlier this week, Premier Horgan called for a “pan-Canadian approach” to travel restrictions, so that all Canadian jurisdictions, “from Coquitlam to Chicoutimi,” speak with one voice.

Trudeau added his voice to that call Friday, arguing that “the best way to protect the economy is to get the virus under control.” But he stopped short of committing to enforceable inter-provincial travel restrictions, instead leaving the door open for provinces to introduce their own measures in the same way the Maritimes created an “Atlantic Bubble” in the summer.

“I think the idea of using the federal Emergencies Act to shut down the borders and guard those inter-provincial borders is not an idea I’m even contemplating right now,” he said.

“I’m not looking at bringing in a federal hammer.”

— With files from the Canadian Press