Trudeau feels most Canadians could be vaccinated by September 2021

Prime Minister Justin Trudeau tried to assuage the public with assurances most Canadians could be inoculated by September 2021, with distribution led by a former NATO commander.
Nov 27, 2020 1:08 PM By: Cassanda Szklarski, The Canadian Press 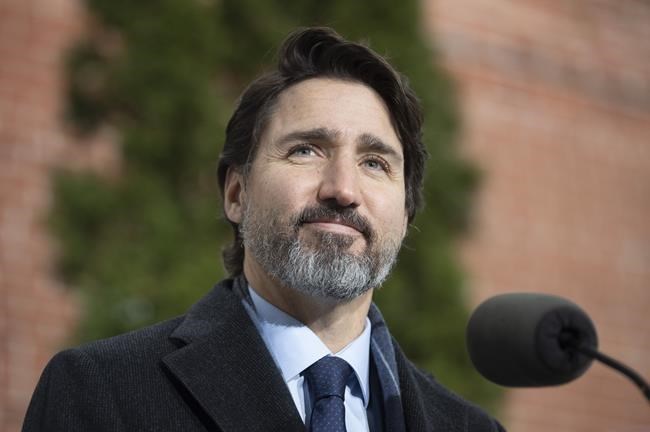 Caption: Prime Minister Justin Trudeau listens to a question from a reporter during a bi-weekly news conference outside Rideau cottage in Ottawa, Friday, Nov. 27, 2020. THE CANADIAN PRESS/Adrian Wyld

Beset by ongoing questions about Canada's COVID-19 vaccine strategy, Prime Minister Justin Trudeau tried to assuage the public with assurances most Canadians could be inoculated by September 2021, with distribution led by a former NATO commander.

Trudeau faced a barrage of questions about when and how such a rollout would unfold at a morning press conference on Friday, acknowledging public anxiety amid alarming infection rates and hospitalizations that have already scuttled holiday hopes for much of the country.

But while promising vaccine news offered "light at the end of the tunnel," Trudeau said "we must hold on a little longer."

"What really matters is when we get across the finish line ... The fact that the doctors highlighted that if all goes according to plan, we should be able to have the majority of Canadians vaccinated by next September, puts us in very good stead," he said, offering the government's most specific timeline yet.

"We're going to continue to do everything we can to deliver for Canadians, listening to experts working with top people to make sure that we're doing this right, and quickly and safely."

Trudeau said Canada has turned to Maj.-Gen. Dany Fortin to lead distribution and handle logistics that include cold storage requirements, data sharing, and reaching Indigenous communities. He insisted Ottawa was committed to working with the provinces and territories on securing safe and effective COVID-19 vaccines as quickly as possible.

That wasn't good enough for Ontario Premier Doug Ford, who later Friday roasted Trudeau for failing to give provinces and territories specific information they need for a potential vaccine launch.

"I didn't get the answer we wanted to hear, none of the premiers got the answer they wanted to hear," said Ford, who appeared at a Friday press conference alongside the new head of the Ontario's vaccine distribution task force, retired Gen. Rick Hillier.

Ontario called on the federal government to immediately disclose its allocation plan, noting reports that other countries have already announced plans to receive doses.

U.S. officials have said 6.4 million doses of Pfizer’s vaccine could reach some priority citizens within 24 hours of regulatory clearance, while Moderna's vaccine could be available by the end of the year, although the general public likely wouldn't get doses until the spring.

No matter when a vaccine arrives in Canada, Hillier said Ontario's vaccine distribution plans would be ready on Dec. 31.

In Ottawa, Procurement Minister Anita Anand also faced questions over a precise delivery date but insisted she is in constant contact with suppliers to make sure they can be deployed as soon as they are approved for use.

"This is a complex process. This is an uncertain environment. But we are on top of it," said Anand.

"I personally will make sure that we have vaccines in place in Canada when Health Canada has provided the regulatory approval."

Trudeau's September timeline was echoed by deputy chief public health officer Dr. Howard Njoo, who had last week suggested the possibility of a fall goal line for vaccinating the majority of Canadians.

Njoo said Friday the Prime Minister's prediction is "in the same ballpark" as previous rollout plans, and a good target to work towards.

But he cautioned there are still "a lot of unknowns."

"Certainly we've always been sort of optimistic, cautiously optimistic, about what the vaccination rollout will look like," said Njoo.

"Right now it's a bit of a moving target. We have two vaccines which are very promising but they're still in the process of going through the regulatory process. If all goes well, and they are approved, then they're the first two out of the pipeline."

Quebec reported 1,269 new COVID-19 infections and 38 more deaths linked to the virus, including nine that occurred in the past 24 hours.

Ottawa has finalized agreements with five vaccine makers and is in advanced negotiations with two more.

The deals would secure 194 million doses with the option to buy another 220 million, according to Public Services and Procurement Canada.

This report by The Canadian Press was first published Nov. 27, 2020.

EU pressures AstraZeneca to deliver vaccines as promised
Jan 25, 2021 9:23 AM