“Not many of us get to know and prepare for the day of our death,” said Laurie O’Byrne, who last Sunday hosted the medically assisted death of her friend, Syd Valentine, in O’Byrne’s home on Beach Avenue in Roberts Creek, B.C.
Feb 1, 2018 1:15 PM By: John Gleeson 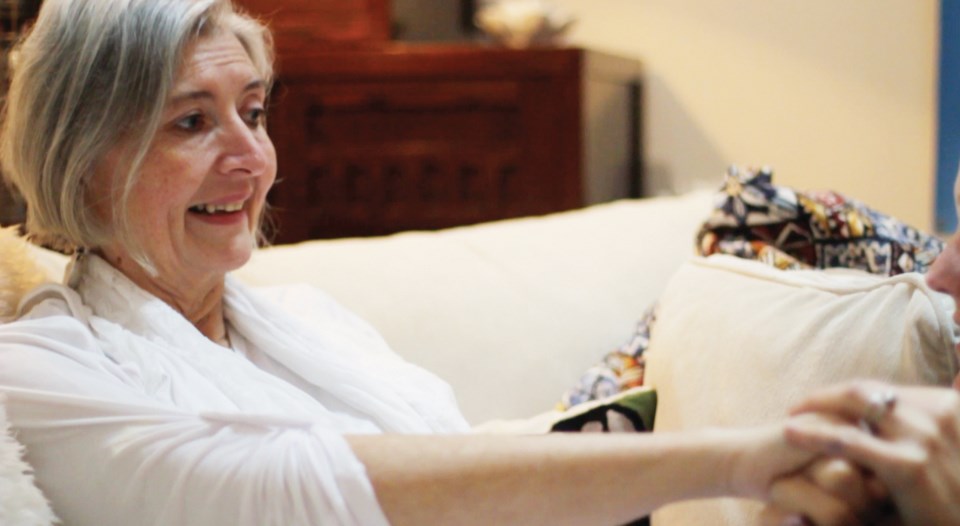 “Not many of us get to know and prepare for the day of our death,” said Laurie O’Byrne, who last Sunday hosted the medically assisted death of her friend, Syd Valentine, in O’Byrne’s home on Beach Avenue in Roberts Creek, B.C.

Valentine, 59, was a native Maritimer known to many on the Sunshine Coast as the owner of Sid’s Vids in Wilson Creek. She closed the store last summer after being diagnosed several months earlier with cervical cancer.

“Syd knew her days were numbered,” O’Byrne said, explaining that the cancer had spread and that “blood transfusions and fate were the only things keeping Syd alive.”

Valentine had signed up for Medical Assistance in Dying (MAiD) in late November after doctors told her that more radiation and chemotherapy treatment could only prolong her life for a few extra months. The most important thing for Valentine, said O’Byrne, was that her 24-year-old son Yosichi accepted her decision.

“Her choice to request MAiD came from a deep trust in life and death, along with a conscious choice to meet the end of life with acceptance and care. She welcomed her community to celebrate and bless her on her journey,” said Penny Allport, who attended Valentine and describes herself as a celebrant and home funeral guide.

O’Byrne describes the day of Valentine’s planned departure: “The day Syd chose for her death she walked through our front door in a stunning black coat, black pants, with a long white blouse and a white lace vest. ‘For the first time in my life I wanted to wear something lacy,’ she said.

“The hospital had topped her blood up so she would feel good for this day.

“Behind Syd was her handsome son, Yosichi. He was carrying a large pot of her favourite squash soup they had made together the day before for her guests on the occasion or her death. Yosichi had taken leave from his job as a medic in the Canadian Armed Forces about three months ago to come home to Roberts Creek for his mother’s imminent death.

“The party was set for one o’clock. There was a group of about 40 people from the community. All were there to honour Syd.

“Syd had asked for a menu that started with Prosecco, and elderflower pressé, chili, her squash soup, good bread, some cheeses and fruit, along with a good shortbread and lemon cheesecake for dessert. Also she wanted a good bottle of Scotch.

“Everyone showed up with gifts of food, flowers, or Prosecco. Syd sat on the couch by the fireplace, as all her friends came one by one to sit and visit with her. Although we brought her plates and bowls of all the foods she requested, in reality she had very little appetite and mainly just drank sparkling water or elderflower pressé to keep her mouth moist.”

Several songs were played, including a live rendition of Amazing Grace, with David Morgan leading on the banjo that Valentine had brought for the occasion and everyone singing along. Allport read the poem “When Death Comes” by Mary Oliver.

Two doctors arrived and “people lined up to give Syd a hug and say goodbye.”

“Goodbyes were the hardest. There was weeping,” said Laurie Verchomin, who coordinated the day. “Then the process was initiated. These doctors were so in harmony with the event, taking the time to explain the process step by step, offering to take questions. There were none. Everyone was in accord.”

O’Byrne continued: “There was a handful of guests who had already taken their leave of the party but anyone who was still there came into the main room where Syd, a little emotional but mostly just calm and determined, was laying on a beautiful improvised day bed with one of her favourite textiles, amidst a small jungle of plants, flowers and candles. Everyone sat or stood, some with eyes open, some with eyes closed, in respectful silence witnessing and holding presence and the love they felt for Syd.”

“The process itself,” said Verchomin, “was begun by asking Syd if she would give her permission once again – a legal formality – which she definitely said yes to… A series of injections was given. The first was a sedative that essentially put Syd to sleep.”

“The whole procedure took about 20 minutes,” O’Byrne said. “When Syd was pronounced dead her son asked that everyone go to the other room while he spoke to the doctors. People began to take their leave.”

The day left a strong imprint on the participants.

“It’s not often we get to feel so alive and yet so conscious of our ultimate destiny,” said O’Byrne.

Allport said Valentine expressed her sincere appreciation of the palliative staff, nursing staff, and doctors, including MAiD providers. “To quote Syd, ‘The nursing staff at Sechelt Hospital healed my attitude to the western medical system as a whole. My heart just about cracked with the kindness of their care. They made me feel human again.’”