An Islay adventure on Vancouver Island 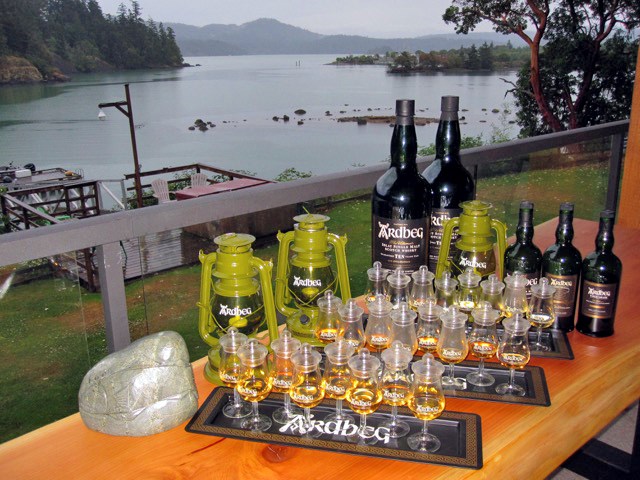 Out trolling for Chinook salmon in the Strait of Juan de Fuca, I watch my fishing guide, Ryan Chamberland, deftly slice the head off a herring, scoop out its guts and thread it onto a line so it moves like a live fish once dropped into the sea.

Chamberland first learned to fish as a young boy, he tells me, when his grandfather taught him to cast a line off the Victoria Breakwater. Back then, his bait of choice was a wadded-up ball of Wonder Bread pulled from his cheek. Today, he’s got plenty of modern equipment, but he wants us to see the old ways of doing things, too, such as this “cut plug” technique he learned while working at a lodge in Haida Gwaii.

Portside, I can see the boat carrying the rest of my group and another keeper of knowledge and traditions passed down through time. Ruaraidh MacIntyre is sporting a tam o’shanter as only a Scotsman could.

He’s here to share his expertise of Ardbeg, the whisky brand that’s employed his family on the Isle of Islay, Scotland, for more than 120 years. MacIntyre left Islay (pronounced “eye-la”) to become the brand ambassador in Canada, but his father, “Big Ruaraidh,” is still responsible for production at the distillery, part of a team of 17 who make more than a million litres of the whisky each year by hand.

I’m with a group of travel writers and whisky connoisseurs gathered at Vancouver Island Lodge in Sooke, B.C., for a taste of the Islay lifestyle and spirit. We spent the day before at a shooting range, firing at bright orange clay pigeons, the first time I’d ever held a gun.

Most of the time, I missed. I clipped one and then, finally, shot another into a glorious mess of pieces in a mid-air explosion that was much more satisfying than I’d expected. MacIntyre, no surprise, hit nearly every one of his clay targets, and now he’s confidently reeling in a prime fish.

Of course, he’s done this before. Fishing and hunting are common pastimes on Islay, an island in the Scottish Hebrides where locals gather what they can from the water and the land. It’s a rough environment where winds are fierce and trees simply won’t grow. Peat, that boggy fuel that gives Ardbeg its signature smoky flavour, is one of the only sources of heat on the island.

“You wouldn’t think people would want to live there,” MacIntyre says, but 3,000 of them do, about a third of them working in jobs tied to the whisky trade.

The consistently bad weather makes for a consistently good whisky, MacIntyre adds, since the cool but not cold year-round temperatures allow consistent flavours to develop during the years the whisky spends aging in wooden barrels in the seaside distillery coated in Atlantic spray.

By the end of our day on the Strait, most of us have reeled in fish of our own — and we’re all ready for a wee dram. Back on land, our guide Chamberland — who’s also the lodge proprietor, boatwright and barbecue master — grills our catch on cedar planks while we warm our bones in the hot tub overlooking the lodge’s small bay. After inhaling the salmon and tearing our way through some fresh-caught king crab, it’s time to settle in for the serious business of learning how to drink a single malt.

The first mistake you’re probably making is drinking too much, and too quickly, MacIntyre explains. A dram of whisky should take as long to drink as a pint of beer. (In Canada, a dram is the same as an ounce, but you’ll tip your hand as a beginner if you order an ounce of whisky at any reputable pub.) Ice is a no-no, since it changes the experience on the palate and causes too much dilution, but a few drops of water — about three millilitres — can “open” the flavours. Before taking that first sip, nose the whisky for 10 seconds, as you would a glass of wine — but if you’re a beginner, be careful.

“The nose is like a punch in the face,” MacIntyre says, smelling the Ardbeg Ten Years Old, “but the balance that comes in the whisky-making process is very evident here.”

Opening your mouth as you inhale makes that first sniff a little easier to take. From there, it’s time to drink, starting with a tiny sip and holding it on your tongue to pick up the flavours — you might taste pepper and anise, tobacco and toffee and, of course, Islay’s peat. Add water a few drops at a time until you get the balance you’re looking for, then settle in to enjoy the glass over a game of cards or a night of tall tales or a song  — it’s the Islay way.

Islay is a 45-minute prop plane flight or four-and-a-half-hour trek by car and ferry from Glasgow. If you make it there, Ardbeg offers distillery tours and tastings. Hardcore fans can even spend the night on site at Seaview Cottage, the former home of the distillery manager, now converted into a three-bedroom self-catering guesthouse.

For the less passionately devoted, a quick hop to Sooke, where Vancouver Island Lodge offers three- and four-day all-inclusive fishing packages, is a much easier way to get a taste of the Islay lifestyle. Of course, if you’re more interested in the spirit, a taste of Islay’s peat is as close as your local liquor store.