New attraction uses light, sound and animation to bring old copper mine back to life
May 14, 2019 1:28 PM By: Sandra Thomas 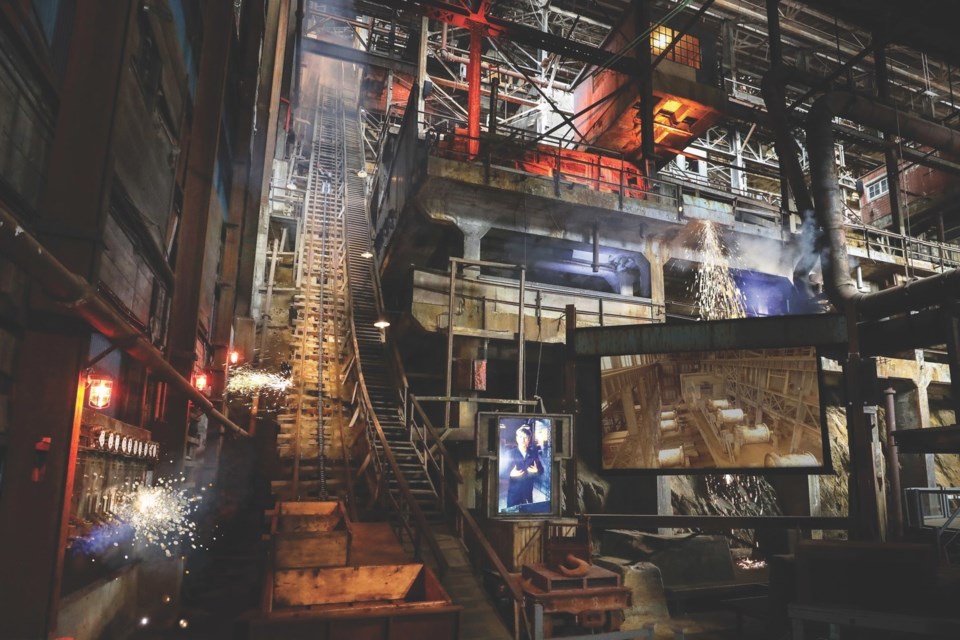 That was the verdict of our five-year-old granddaughter as the new live action attraction BOOM! at the Britannia Mine Museum came to a close during a media sneak peek May 12.

But it wasn’t just the kids who were impressed with BOOM!, which uses light, animation and sound to bring the 20-storey, historic Mill building back to life at the museum, located in Britannia Beach, just south of Squamish along the Sea-to-Sky Highway.

Adults and kids of all ages were mesmerized as they sat through the 12-minute, multi-sensory, acoustic adventure, which transports visitors back in time to the 1920s when the mine was booming as the largest copper producer in the British Commonwealth.

BOOM!, which opens June 1, is narrated by a young man dressed in miner’s overalls who spoke to us from a small video screen and described — in easy-to-follow detail — the history of the mine, how the massive machinery in front of us worked to extract copper from the surrounding rock, and how the light shining from the mine’s hundreds of windows became a beacon, not only to the community built up around it, which eventually reached 60,000, but also to sailors out at sea.

BOOM! is a creative collaboration between the museum’s board of directors, Vista Collaborative Arts and Dynamic Attractions, a Port Coquitlam-based company known for its international projects, including rides at theme parks such as Universal Studios and Disney.

As our “tour guide” talked us through the workings of the mine, an ancient rail cart, which used to carry rock, came to life, while sparks flew above us as if from a welder’s torch and booming sounds mimicked what once was.

Following the experience we were able to explore the vintage white Mill building, which looms over the mine and, for many, acts as a landmark on the highway between Vancouver and Squamish and Whistler.

It was in 1888 when Scottish doctor Alexander Forbes was prospecting at Britannia Beach when, by accident, he discovered a patch of mineralized rock, a chance event that lead to the opening of Britannia, one of the largest copper mines in the world at its peak.

The mine opened in 1904 and by 1916 was capable of producing 2,000 tons of ore a day. Over the decades the mine and surrounding community, which for years was only accessible by boat, thrived and eventually included a bowling alley, tennis courts, a roller skating rink, library and pool hall to keep the isolated residents entertained. Facing increasing operating costs and a faltering economy, the mine closed in 1974.

You can follow the history of the mine in the once deserted buildings, which now houses displays and attractions, including the Beaty-Lundin Visitor Centre, the main exhibition hall, which showcases theatrical mining displays, a mineral gallery, theatre space, an interactive play area and the Canadian Mining Hall of Fame. But one of the biggest hits with the kids was the old machine shop where they were delighted to discover some of the pieces of machinery still have moving parts.

We were also able to clamber aboard a rusted yellow train, which took us deep inside a mining tunnel and we learned about the drills and machines the miners used between 1904 and 1974. The kids really enjoyed this dimly-lit part of the tour, which also included some loud sounds of machinery. It was in 2010, when much of the revitalization of the mine was completed and museum opened.

For some reason I had never previously visited the Britannia Mine Museum and I quickly realized what I had been missing, especially accompanied by three of our grandkids, who despite their varying ages of five, almost-10 and 14, all had a blast. In fact we were having so much fun, we cancelled our Mother’s Day brunch reservation to spend more time at the mine and after almost four hours, I headed home while they stayed and carried on panning for “gold” in one of the most popular attractions of the day.

Though I have a feeling BOOM! will soon become a contender for “most popular,” after its opening weekend June 1 and 2.