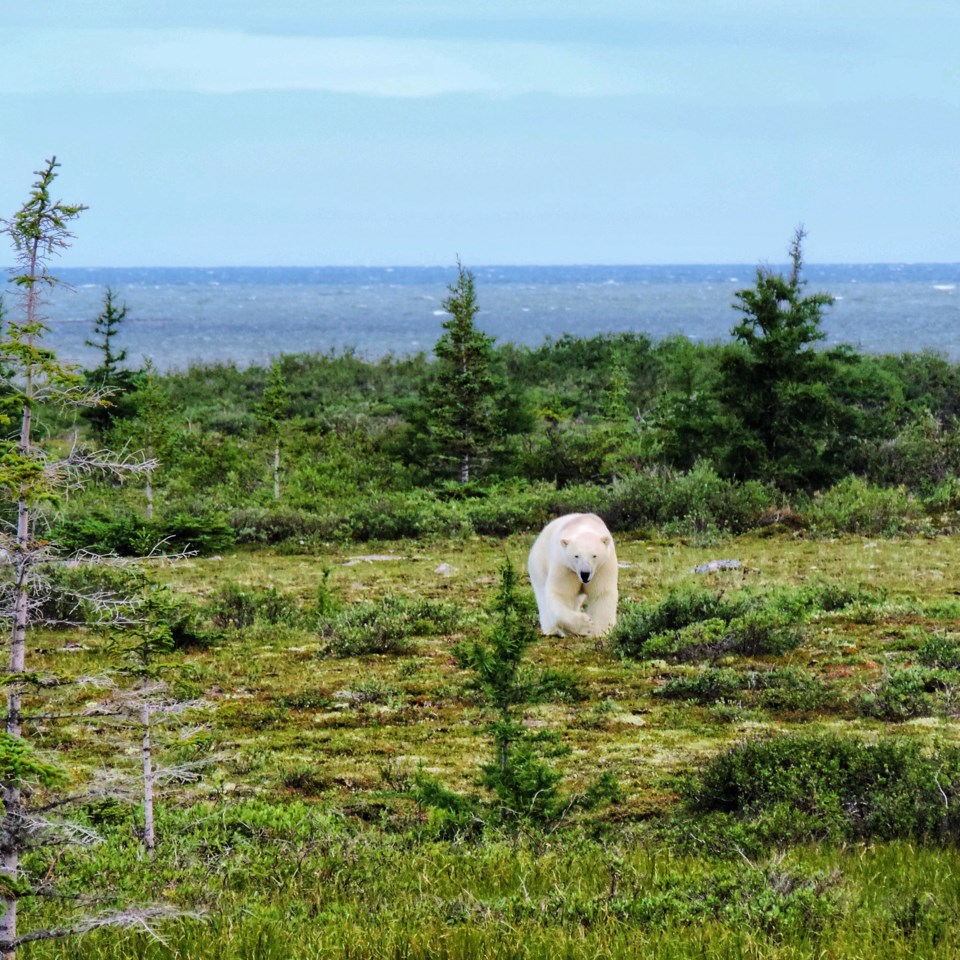 A polar bear ambles along the muskeg on the shores of Hudson Bay. Photo Churchill Northern Studies Centre

The sirens were growing louder as we toured the Parks Canada Visitors Centre in downtown Churchill, Manitoba. I was admiring the 12-foot tall polar bear exhibit when my curiosity got the better of me. I went to the door to peer outside and there she was, a large 29-year-old polar bear rambling right past us, onto the train tracks and into the tall grassy flats nearby.

We piled into our van to follow the pursuit at a distance, which now included a helicopter tasked with darting the bear for safe transport to the Polar Bear Holding Facility outside of town. The bear would remain there in holding for 30 days and then be released back into the wild.

This fleeting encounter was a strong reminder that safety is of primary concern in polar bear country. This was one of the first lessons we learned at our welcome orientation a few days prior at the Churchill Northern Studies Centre (CNSC).

“Never go outside without an armed guard.” (So post-dinner walks were out.) “In case of polar bear alert, jump into the nearest car or house.” (Doors are always unlocked, because, bears.)

Such hyper-alertness took some getting used to, but our group of citizen scientists was here to do more than simply ogle over animals and snap photos. We’d signed up for the CNSC’s Wild Planet learning vacation, a kind of summer science camp for adults.

For curious travellers interested in communing with polar bears and beluga whales in Churchill’s subarctic environment, while seeking a deeper understanding of the North, a learning vacation at the Churchill Northern Studies Centre may be just the ticket.

The CNSC is an independent, non-profit research and education facility located 23 kilometres east of town. Founded in 1976, its mission is to understand and sustain the north. Scientists from all over Canada come to this field station to study arctic animals like belugas, polar bears and wolves, as well as plants, birds, and the Aurora Borealis, the northern lights. Increasingly, they are also measuring the profound affects of climate change on the animals and subarctic environment.

A stay at the CNSC is different than one at your average lodge or hotel. Rooms and washrooms are more communal in nature, but you get to eat dinner with scientists and guides and chat about polar bear behavior or the size of the local wolf pack. You also get to chip in and help with the dishes after enjoying an incredible meal in the dining hall, one of Churchill’s best-kept secrets.

Every day during my five day Wild Planet experience in late August, our group was out and about, discovering the natural environment and hiking through the boreal forest, exploring the First Nations and Hudson Bay Company history of Churchill, and learning about the plants and animals of the subarctic tundra.

Despite the heart-pounding excitement of seeing a polar bear run through town, late summer belongs to the whales. August is breeding season for thousands of beluga whales that nurse their young calves in the warm waters of the Churchill River before heading north to the Arctic Ocean. I was excited that my Wild Planet adventure included the opportunity to kayak among them.

I donned my waterproof overalls and dragged my bright yellow kayak towards the shoreline to paddle out to watch the whales at a closer distance. It was thrilling to see the white adult whales swimming close to their grey offspring as they played between, and underneath, my kayak.

The baby belugas loved the whorls created by my paddle in the warm water and I caught glimpses of their smooth backs as they surfaced for breath. The sounds of breathing whales, clicking cameras and happy laughter echoed off the shoreline. It’s not every day you can connect with wild animals in such an intimate and beautiful way.

Each night, we participated in talks by resident scientists presenting their latest findings about the health of the polar bear population, red fox behavior and caribou migration routes. I was dismayed to learn that motion-sensor cameras at the Wapusk National Park observatory had snapped pictures of not just polar bears, but also grizzly and black bears who were well north of their territorial habitat.

Things are changing in the north. There’s no better way to understand those changes then by participating in a signature scientific experience at the Churchill Northern Studies Centre.

If you go: The busiest season for CNSC Learning Vacations is polar bear season, which runs from October to November when the bears await the formation of sea ice in Hudson Bay. The darkness of February and March is the best time of year for those chasing the Northern Lights, while the summer’s Wild Planet experience features exploration of the nature and history of Churchill, as well as kayaking with beluga whales in the Churchill River.

Claudia Laroye travelled as a guest of the Churchill Northern Studies Centre, which did not review or approve this article.