A week at Riu Emerald Bay was the perfect antidote to the record-breaking rains that hit the West Coast in January
Feb 15, 2020 12:00 PM By: Sandra Thomas 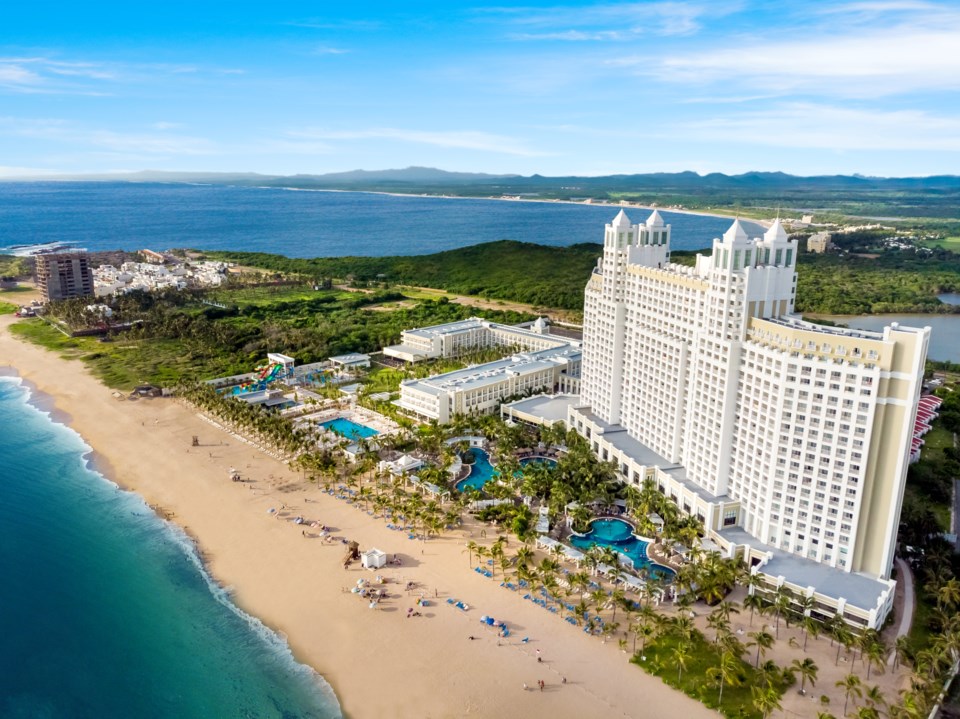 Teetering at the top of a 50-foot, stone tower situated above the cliffs of the Glorieta  Sánchez Taboada Esplanada near downtown Mazatlán, we watched as a slim tattooed man steadied himself.

Using his bare feet and outstretched arms to balance on an impossibly small ledge at the top of the El Clavadista lookout, the man monitored the waves crashing into the rocks below.

Despite his dangerous perch, it was obvious the man is no fool and had no plans of plunging to his death in front of a bus load of tourists. The danger lies in the fact the waters below are shallow, so these cliff divers must time their leap-of-faith to perfectly match the waves.

So, it was at the exact right moment when the man leapt straight out from the tower before curving his body into a perfect swan dive and slipping into the water below.

After scrabbling up the rocks to a round of applause from the waiting tour groups, we all reached into our bags and pockets for tip money — a small price to pay for the death-defying feat we’d all witnessed.

The stop to watch the cliff diver was just one on the “Amazing Mazatlán” tour we enjoyed in January, which was arranged by the Sunwing representatives who man desks at the Riu Emerald Bay, our home-away-from-home for the week.

Also on the tour were stops at a market, the “Golden Zone” shopping district, the famous Plaza Machado, a tequila tasting and a visit to the breathtakingly beautiful Cathedral Basilica of the Immaculate Conception located in the centre of historical downtown Mazatlán.

The cathedral, with its octagonal dome crowned by an iron cross, was the vision of then bishop Pedro Loza Pardave in 1856 and, although work on the magnificent church was halted just a year later, construction began again in 1875 and was completed in 1899.

The cathedral acts as the beating heart of the city, where locals seek solace in prayer and tourists gaze gap-mouthed at the majestic mix of Gothic influence and Baroque stylings.

During our visit, city workers were in the midst of preparations for its Mardi Gras-style Mazatlán Carnival 2020, which takes place Feb 20 to 25. Mazatlán Carnival is thought to be the third biggest event of its kind in the world with more than a million people celebrating in the city for the six days before Lent.

But, for the majority of our week, we were happy to hang out and enjoy the sun at the Riu, especially considering the fact it rained 30 out of 31 days in Vancouver in January. My husband and I had a room in the new tower at the Riu, which was just completed last September.

Our room had a spacious balcony offering spectacular views of the ocean and the Champagne-coloured sand of Brujas Beach, which also meant we were able to enjoy incredible sunsets every evening — all rooms at the Riu face the ocean.

The new tower is also located far enough away from the disco and night club, that when we decided to go to bed (usually before 11 p.m.) it was quiet enough to actually sleep.

On paper, the Riu Emerald Bay sounds massive with more than 1,000 rooms and six pools, but in reality it’s laid out in such a way it only took us a day to figure out where everything was. The pools are basically side-by-side with paved paths and landscaping dividing them and like the rooms, all face the ocean.

And when it comes to the pools, there’s something for everyone. The adults-only pools are where the action is and where you’ll find the swim-up bars, while the infinity pool draws adults more interested in reading and napping than day drinking.

Meanwhile, families can choose from several pools, including the new Splash Water World water park, which looked to be extremely popular with kids of all ages.

As for food, there are no real ala cart restaurants, but rather a couple of specialty buffets where you need to make reservations and that offer a select number of items you can order from a menu.

But, after trying the vast fresh offerings from the (no-reservation) dinner buffets we decided the Riu offers some of the best food we’d ever enjoyed at an all-inclusive resort in Mexico and didn’t bother making any more reservations.

That also meant we could eat dinner whenever we felt like it. Mazatlán is a major agricultural hub for Mexico, so fresh fruits and vegetables were abundant everywhere.

There is no room service at the Riu, but there are snacks available 24-hours a day, including pizza and sandwiches. Of course, alcoholic drinks are also available all day and night and each room has a self-serve bar.

Also self-serve, and a big hit with the kids, are the ice-cream stations at the resort. Adults can also help themselves to beer and wine in the lunch buffet and to beer, water and soft drinks at the self-serve station by the family pool.

Speaking of kids, the RiuLand kids club offers supervised activities all day long and features a kids’ pool and playground.

Something I was surprised by at the Riu, is their commitment to introducing environmentally-friendly initiatives. I mean, when was the last time you saw recycling bins at an all-inclusive resort.

The glasses at all of the bars, including the pool bars, are made from reusable plastic, as are the plates from the poolside takeout spot, Pepe’s Food Grill. And in the rooms those single-use, plastic shampoo bottles have been replaced by a dispensing machine in the shower.

At the bars, straws are not offered unless requested and the ones they do have are biodegradable. As one bartender told me, it’s a move they made to help “save the fish and turtles.” The way he described it to me made it obvious he’d had some training in sustainability.

By the way, we found the staff members across the entire resort super friendly and helpful and had no idea I was there to write a travel story.

The Riu Emerald Bay also has a gym, whirlpool and sauna available for guests to use for free and a spa for paid treatments. The resort is smoke-free within the interior and offers designated smoking areas.

We soon discovered the pool-bar areas were where most of the smokers congregated, so we were able to avoid them on days we wanted to.

Of note is the fact all tips are included with a package to the Riu Emerald Bay, but considering the daily wage of almost any worker in Mexico is less than the hourly minimum wage in B.C., we tipped at every meal and at the bars and noticed most other guests did as well, which was nice to see.

We really enjoyed our week in sunny Mazatlán and I predict it’s going to soon be established as one of the “hottest” vacation spots in Mexico. So keep that sunscreen ready and watch for seat sales, because there are deals to be had.

We flew with Sunwingand enjoyed the perks of their Elite Plus service, which for $50 per person includes up to six-inches more leg room — great for my 6-foot, three-inch husband, a welcome glass of bubbly, complimentary seat selection, priority check-in and boarding, priority security line access and, most importantly, an increased baggage allowance of up to 30 kilograms.

That extra luggage allowance was great due to the fact I had been extremely busy leading up to our trip so I was just able to throw a bunch of clothes into a suitcase and figure out what worked best once we arrived. Typically, I spend several hours planning each outfit with great care and attention as a way to keep my luggage’s weight to a minimum and just pray the weather doesn’t throw me any curve balls.

And, in sunny Mazatlan, there was not a curve ball to be seen — outside one of its many baseball diamonds.

(When I checked for travel near the end of February, I found deals for the Riu Emerald Bay from Sunwing for $1,375 for a week, including flights, taxes and fees — and all the tequila you can drink.)

Sandra Thomas was the guest of Sunwing and Riu Emerald Bay, neither of which read or approved this article in advance.