Everyone is loving the new plant-based Beyond Meat burger at A&W, except vegans

People who hadn’t eaten fast food in years dropped everything to try the new A&W Beyond Meat burger
Jul 10, 2018 5:27 PM By: Lindsay William-Ross 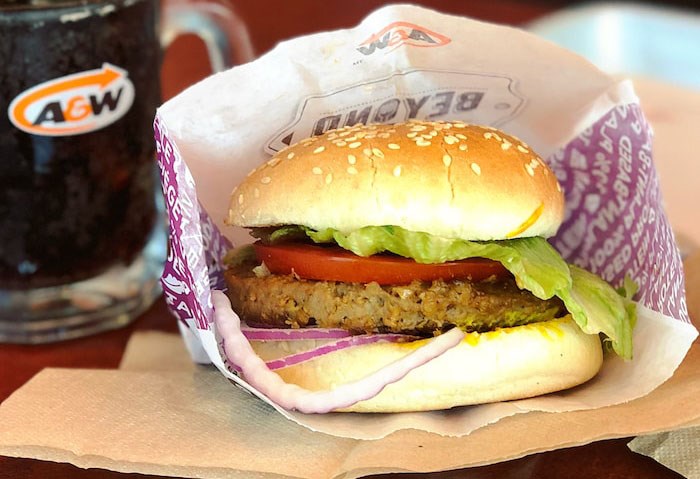 On July 9, A&W launched the country’s first-ever fully plant-based burger patty, the Beyond Meat Burger, at all of their locations Canada-wide.

People who hadn’t eaten fast food in years dropped everything to run to their nearest A&W to get the alternative burger, and there have been plenty of rave reviews in its first two days.

Omnivores are impressed that the plant-based patty mimics the texture and flavour of meat (it does not, contrary to some inaccurate reports, “bleed” like another patty on the market, the Impossible Burger).
@meeshee777/Instagram

But while the overall reception has been positive, there’s a vocal community of dissenters to the Beyond Meat Burger at A&W Canada, and it might be taking a bite out of their target market: Vegans.

Vegans have had mixed reactions to the Beyond Meat Burger, with many turning to social media to share their disappointment on launch day, and to explain why they won’t support the fast food chain’s big plant-based product.

Their objections centre on the fact that A&W Canada does not serve the Beyond Meat Burger as a fully plant-based burger altogether, meaning customers must specify when ordering to hold the mayo and the “Uncle Sauce,” which both contain animal products.

For some who follow a vegan diet, that’s enough to get them on board. However, others are less appeased, and are taking A&W, and to some extent the Beyond Meat business, to task for how the burger is prepared and marketed.

“Beyond Meat Burger patties are cooked on the same grill as beef, bacon, and eggs and may come into contact with these ingredients,” explains A&W on their online menu listing for the item.

A&W has actually shied away from using the word “vegan” in conjunction with the burger, though they have used many vegan influencers to get the word out about the game-changing new menu offering.

A debate about the vegan-ness of the bun can easily be settled thanks to A&W Canada’s “Food Facts” sheet, which lists out all of their products’ ingredients. The Beyond Meat Burger comes on a Sesame Seed Bun, which does not contain animal products. Their Hamburger Bun is also vegan, however their 7 Grain Bun is made with eggs. One option is that the Beyond Meat Burger can come wrapped in lettuce, a boon for carb-cutters and gluten-intolerant customer.

Still, a petition circulating online is demanding that A&W make the burger truly vegan, while turned-off consumers like Michael Riches of Calgary are not budging. Riches says on an Instagram post:

“I’m sorry, I just can’t ? I know every vegan in the land is super excited about this right now. But @awcanada has taken a Vegan @beyondmeat patty, grilled it in eggs, bacon and beef juice, put it into a non-vegan burger, and now thousands of vegans are posting pictures of it with sides of onion rings (non-vegan, by the way) and fries (cooked in the same fryers as the chicken) and have sent a nice strong message to A&W that the Vegans of Canada… Just. Don’t. Care. If you eat a plant-based diet, its up to you, but there’s nothing #vegan about this. Sad.”

Epic breaking news out of Toronto tonight! As of July 9th, all @awcanada’s 925 locations across Canada will serve the A&W @beyondmeat burger, making plant-based options accessible to everyone!!! This is a game changer. Got to try it tonight with a panel of taste testers including @laurentoyota @edgyveg and @mdzofficial and we all agreed it’s seriously Also amazing to meet @beyondmeat CEO, founder and visionary Ethan Brown who says (and proves), “You don’t need animals to make meat.” Amen! See more from tonight’s event in stories

Vancouver’s Erin Ireland, a well-known Canadian vegan food writer and lifestyle influencer, was among those who attended a sneak preview event in Toronto last month for the Beyond Meat Burger. She’s been excited about the product, and shared with V.I.A. her appreciation of the burger, and used her Instagram stories on launch day to address the naysayers.

“First of all, I hear you and don’t love the idea of a shared grill either. I respect your decision if this isn’t for you. But! (It’s a big but…) […] In being so vocal about your disdain there are two negative consequences that I feel have huge implications for the plant-based movement in Canada and possibly around the world[.]”

Ireland says the vegan community’s backlash could not only discourage A&W from expanding their vegan options, but also curtail efforts from other major chains to see the need to offer their own vegan menu items. And that, additionally, the notion that vegan customers are impossible customers can have negative consequences at other restaurants nationwide–of which so few of them are fully vegan, at that.

“If we want more restaurant to get on board with plant-based options we’ve got to applaud them for their efforts,” she adds.

Though Ireland acknowledges the shared grill is a “deal breaker” for some, she also urges dissenters to “see the bigger picture and be excited for the potential millions of Canadians who have a chance to see how awesome plant-based food can be.”

I was excited for the beyond meat vegan burger coming to @AWCanada but then I did some research and found out it won’t actually be vegan so rip the dream fellers.

Was really excited to try the @BeyondMeat burger at @AWCanada ... so damn disappointed they cook them on the same grill with the meat ones. Why have a #plantbased burger that a #vegan can’t eat?! #MarketingFail #FalseAdvertising ... Also amazed @BeyondMeat was ok with this

@AWCanada Thank you for the Beyond Meat Burger. It was delicious. I’m glad vegans have a great option !! #beyondmeat This was a great business move to do this and add it to your menu. #vegan #burger

Was really excited to try the @BeyondMeat burger at @AWCanada ... so damn disappointed they cook them on the same grill with the meat ones. Why have a #plantbased burger that a #vegan can’t eat?! #MarketingFail #FalseAdvertising ... Also amazed @BeyondMeat was ok with this

A&W #Canada now selling and promoting the #beyondmeat burger. Wow! I am so incredibly excited to hear this! One to change a few. A few to change many! @BeyondMeat