Fire up the fizz for patio season

These soda-charged sours are what you should be drinking this summer
Jun 19, 2017 3:53 PM By: Joanne Sasvari 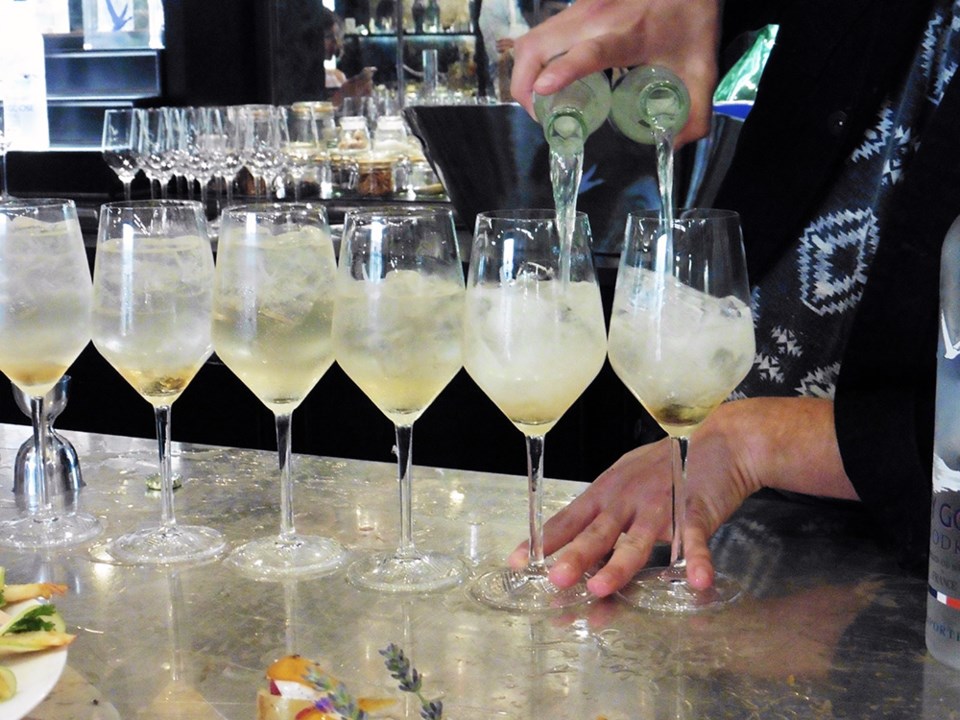 A fizz made with ginger beer instead of soda water, at Le Logis in the Cognac region of France. Joanne Sasvari photoJoanne Sasvari

Some of Europe’s most talented bartenders are lounging around the swimming pool at Le Logis, the 16th-century chateau in France’s Cognac region that Grey Goose calls home.

It is hot – the mercury hovering around 30 C – and humid, with thunderstorms threatening to break later on.

The bartenders are, needless to say, thirsty.

So what are all these refined palates drinking? Fizzes, of course.

In the last couple of years, Grey Goose has been promoting the fizz as a responsible, low-alcohol way to enjoy the brand’s premium vodkas. It’s a good idea, especially in the summer heat: coolly modern, elegantly sophisticated and satisfyingly thirst quenching.

But trendy as it might be, the fizz is actually one of the world’s oldest cocktails, mentioned as far back as the 1887 edition of professor Jerry Thomas’s Bartenders’ Guide.

It is essentially a sour freshened up with soda water. It could be made with any spirit (though gin is the classic), plus citrus juice and a sweetener, shaken and topped with soda water.

It’s similar to a Tom Collins, although, traditionally, the Collins is sweeter and served on ice in a tall 12-ounce glass, while the fizz is served without ice in a smaller eight-ounce glass.

As the cocktail historian David Wondrich writes in his book Imbibe!: “The Fizz is, essentially, a short drink: It’s meant to be drunk down with dispatch.”

The fizz is also similar to a Gin Rickey, which uses lime instead of lemon juice, and a French 75, which is made with sparkling wine instead of soda water.

Truly, though, we could just call them all fizzes and be done with it.

The fizz is a quintessentially simple cocktail, which means there are also endless variations on the theme.

Thomas himself offered recipes for six different fizzes, including the Ramos Gin Fizz or New Orleans Fizz, which was invented back around 1887 by a Crescent City bartender named Carl Ramos. It is a decadent concoction of gin, lemon-lime juice, heavy cream, orange flower water and a splash of seltzer water, all shaken till you feel like your arms are going to fall off.

So popular was the drink that by Mardi Gras in 1915, Ramos reportedly had 35 shakermen working full time to keep up with demand.

The Grey Goose version is much simpler than that, thankfully. It is a quaffable mix of vodka, elderflower liqueur and lime juice, topped with soda and served on ice in a large wine glass; there are also easy variations made with Grey Goose’s flavoured vodkas La Poire, Citron and L’Orange.

Back at the chateau, that’s given the bartenders a nice, clean palette to work their own variations on the theme. Luca from Milan replaces the lemon with grapefruit juice and adds a spritz of salt water; Frantz from France uses peach instead of elderflower liqueur and ginger beer instead of soda water; Nouri from Berlin switches out the lemon juice with yuzu, lemon acid and verjus, adds pop rocks for the fizzy sensation, and serves the drink in an oyster shell.

They’re all deliciously flavourful drinks, and with no more than an ounce of spirits and maybe a splash of liqueur, perfect for a backyard barbecue or garden wedding reception.

So go ahead, create your own variation on the fizz. It’s what you’ll want to enjoy at your own chateau all summer long.

This simple but elegant vodka fizz is a clean canvas for your own experimentation.

Place vodka, elderflower liqueur and lime juice in a cocktail shaker along with some ice. Shake vigorously. Fine strain into a chilled flute or large wine glass and charge with soda water. If you like, add a few cubes of ice and garnish with a slice of lime. Serves 1.

Note: For the La Poire variation, use Grey Goose pear-flavoured vodka instead of regular vodka, skip the lime juice and garnish with a long spear of Anjou pear.