Mijune Pak resents the need for sleep. To her, its time that could be better spent eating, or reading about food, or coming up with the perfect way to describe what she ate, or thinking of the perfect question she could ask a chef.
Apr 30, 2013 9:00 PM By: Vancouver Courier Staff 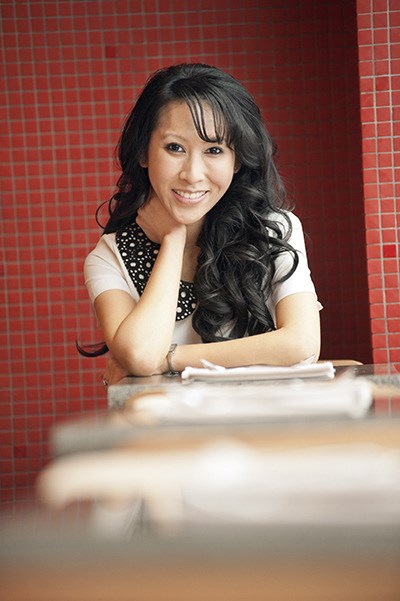 Mijune Pak resents the need for sleep. To her, its time that could be better spent eating, or reading about food, or coming up with the perfect way to describe what she ate, or thinking of the perfect question she could ask a chef.

Its a sunny but cool spring afternoon and shes enjoying a London Fog at Beaucoup Bakery. A friend walks in, they hug and she can instantly rhyme off her recommendations the pine nut croissant, peanut butter cookie or cheese scone. She has another coffee date in an hour so she is pacing her caffeine intake, although its not the caffeine that keeps her up at night. Its the need, the drive, the desire to learn more about her favourite subject food. Thats when she mentions her dislike of sleep. Id rather read and write and experience! Ill read the heck out of a dish.

Starting this week, Pak will be sharing her passion for and knowledge of food in our pages with a weekly Follow Me Foodie column. Shell have the freedom to explore whatever subject she wants, and give our readers insights into Vancouvers food culture, from whos doing what to where some of her favourite places to eat are.

Pak was born and raised in North Delta, the daughter of immigrants from Hong Kong. Her birthday is in June and her mothers name is Mimi, hence Mijune. Her sister is Mijon because her dads name is John.

Growing up, I was a visible minority, she remembers of a happy childhood on Sunshine Hill. I would bring Asian food for lunch and people would be, Whats that? Youd get shy and embarrassed and want to bring a ham and cheese sandwich or a Mr. Noodles. If I brought congee or last nights leftover rice, Id get looks.

I can remember one day when the school wanted the parents to cook something from their culture. Everyone wanted to try my moms cooking. It was almost like they had to see what the process was.

Mijune and her best friend used to spend the hour after school cooking an afternoon meal, which theyd have before dinner a few hours later.

I can hold my own and eat, but in high school I could even eat more, she says with a smile. Food for [my friend and I] was always the solution for us. If we were bored, wed eat. If we were angry, wed cook, because we knew we could agree about food.

By Grade 9, she was taking part in Dine Out Vancouver. But the real dedication to her food education began during the six months she spent in the Netherlands as part of her communications degree at SFU.

Id do online research and read about food. I would make trips to Paris to find the croissant or brioche wed walk eight Paris blocks to eat this one croissant Id read about. In Hungary Id follow old men to see where theyd go for lunch. In Italy I had a minimum of four scoops of gelato, and a maximum of eight scoops, every day for eight days. When I went to Marseilles for the first time, I wanted to know what I should try fish with bone? Fish with head? What broth? I wanted a friend from every country so I could talk about food and get them to give me their mothers recipe.

So why didnt she study to be a chef? I really admire chefs and what they do, she says. Thats why I spend so long researching my posts. I want to show them why I appreciate their food and why I thought what I did.

But some people say never turn your passion into a job. For me cooking is one of those things I love doing for four to six people. But for 100? That would ruin it for me.

She almost fell into her career as a full-time food blogger but, like all things she turns her mind to, once she started it became an obsession to do it right and do it well. It was never meant to be a career, she says. My sister encouraged me to start the blog. She did a fashion/makeup blog. She taught me how to set it up and then asked me to think of a name. For the Love of Food? That was taken. Follow Me Foodie. That was not. She said, Secure your Twitter name and YouTube account. I thought Id never use them. That very first day I hit post, it was so amazing. I was addicted. I thought Id do it once every three days. Then I started doing it every day, and now I take Saturdays off.

Shes also emerged as a respected travel writer, a natural evolution of her desire to explore different cultures favourite foods. You need to travel and have global experience. It helps build your palette and learn whats happening in other cities.

Next week Cathay Pacific is flying her to San Francisco where shell be one of three judges in the Noodles of Asia competition to come up with a noodle dish that will be served on the airline.

Shes almost as well known for her fashion sense she has about 60 pairs of high-heeled shoes; the only flats she owns are running shoes she bought in high school. She has a metabolism that allows her to lose weight as easily as she gains it, but adds that she loves wearing dresses (size zero to two) because they are more forgiving than pants when shes been indulging a bit too much.

I hate to exercise, she says with a laugh. I may look small on the outside, but my arteries might hate me.

And when asked if she has any guilty pleasures she says no, not because she has no food pleasures but because she doesnt feel guilty about anything she eats.

Honestly, its very hard for me to have a guilty pleasure unless its just eating too much of one thing.

You can read Follow Me Foodie's début column here.

Internationally recognized as one of the top food blogs in Canada

Pak and her Follow Me Foodie articles have appeared on Food Network, Zagat and in OpenRoad Driver, BC Living, The Vancouver Sun, The Now Newspaper, and Westender to name a few

You can also catch Pak at food events, culinary competitions, and on News 1130AM radio every other Friday for Foodie Fridays