Its a quiet fall morning in Gastown. That Vancouver light so grey and all-revealing travels leisurely down through ceiling-high warehouse windows to glisten off the polished concrete below.
Oct 8, 2013 9:00 PM By: Vancouver Courier Staff 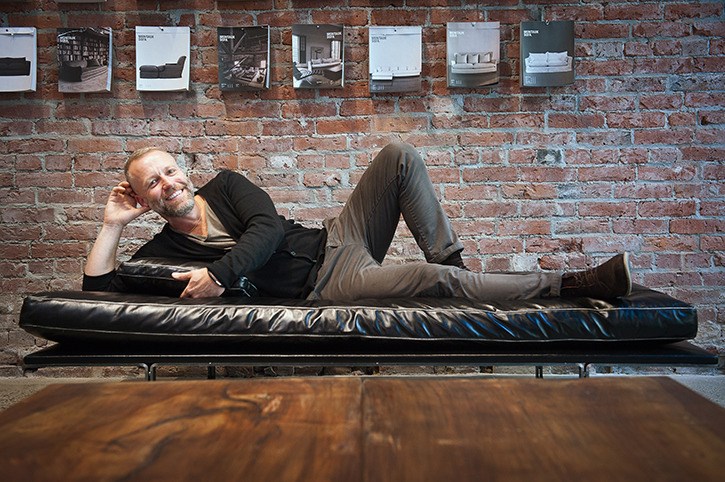 Its a quiet fall morning in Gastown. That Vancouver light so grey and all-revealing travels leisurely down through ceiling-high warehouse windows to glisten off the polished concrete below.

Under its steely glare, the Montauk showroom shows no signs of the wild night it just had.

Having quickly become one of design weeks annual blow-outs, Montauks third annual Crazy Little Party on Sept. 21 saw silver foxes jumping on couches (Prosecco and mini Yorkshire puddings in hand), and friends air-kissing hello only to lose each other in a sea of Vancouvers most stylish.

While the crowd would have looked effortlessly at home at Montauks Boul. St-Laurent location in Montreal, or Mercer St. in New York, the Vancouver showroom clearly speaks the Gastown vernacular.

Rewind five years: Chartier and Montauk owner Tim Zyto would spend their mornings standing near Aveda on Water Street, staring at the Abbott Street space and watching the walk-by traffic.

We were not sure when we saw the outside if it looked like a church or a restaurant! Chartier laughs. The cavernous and abandoned erstwhile Chinese restaurant had rats, pigeons, asbestos, an unauthorized groundskeeper

We wanted to be close to the big guys here in Vancouver, not to name anyone, he winks good-naturedly, his french accent rolling gently past a dazzling a smile. We love the essence of Gastown. It feels for Vancouver that there is a soul here. And I like to modernize old things but keep the essence, so it was the right area.

And thus the struggle began. First, the property was not for sale. Negotiations, which included Chartier flying out to personally work his magic, dragged out for two years.

Then, reality sunk in: everything had to be updated. And, painfully, construction was forced to halt for the 2010 Olympics.

Discovering, also, that the collapsing building was heritage protected (Im not sure I would have not run away when they told us that), was almost the last straw, but it was their original budget that crumbled instead.

Chartier jumps up, gesturing past the yards of air above him, to the gorgeous exposed steel beams that draw the eye ever higher.

There was a lot of structure involved that we were not aware of. We dont build for earthquakes in Montreal, so there was a huge learning curve.

All that structure was freaking me out, I didnt want it,

he says passionately. But, without it, the building would have twisted. We knew what we wanted but we were not aware of what we needed.

Now, Chartier says he loves the look, but admits it was a constant battle of wills between him, Zyto, the architect and the building.

The two-storey masonry structure was originally the Cosmopolitan Hotel Rooms and Alcazar Saloon, and one of the first brick hotels built after the fire of 1886.

Chartier and Zyto stripped it back to its original features (but drew a budgetary line at restoring the exterior brickwork) and now the lofty space showcases Montauks sofa mastery: sustainable, down-filled luxury, made in Canada and wrapped in fabrics that feel as natural as clothing against the skin.

Chartier has been with Montauk since its inception in 1995. His story differs drastically from Zytos, though, who was already building and selling sofas out of a space in St-Laurent in the early 90s.

Chartier, on the other hand, dropped out of law school to join the army. It wasnt until 1992 that design school caught hold:

At first, I didnt want to go into design because I thought it was too gay, he chuckles, rolling his eyes. So here I am.

And the Hickey Block thanks you.