A new area dedicated to “selfies,” lets fairgoers pose in front of iconic scenes from the PNE
Aug 15, 2019 3:26 PM By: Sandra Thomas 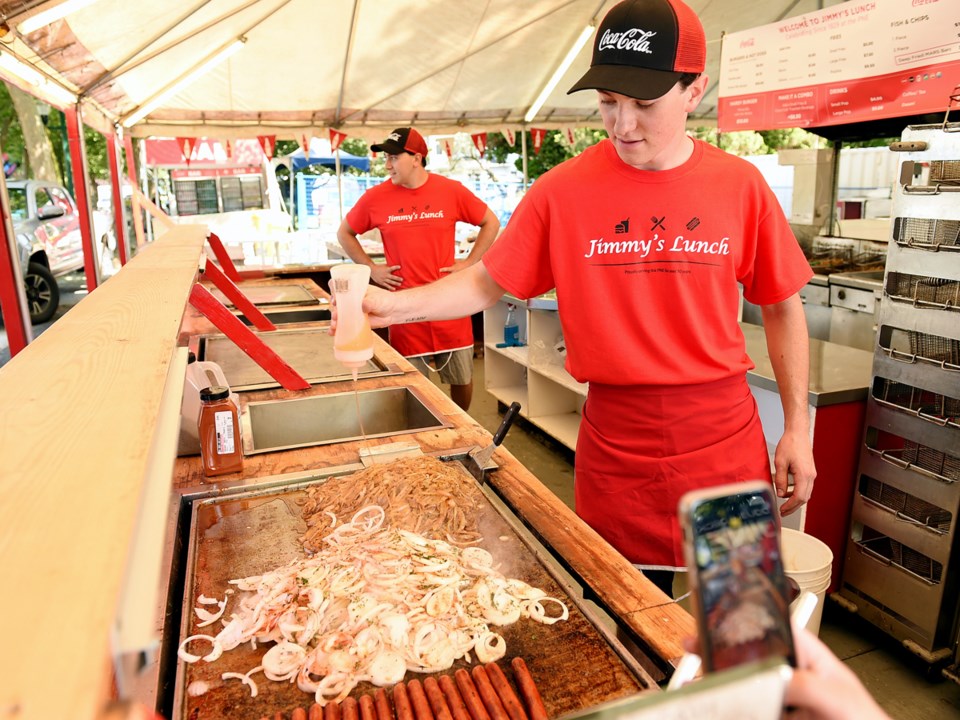 Jimmy's Lunch is celebrating 90 years at the Fair at the PNE. Photo Dan Toulgoet

Walking along an almost deserted midway winding through the Fair at the PNE, which opens this Saturday, it was impossible to miss the smell of frying onions wafting from the final destination of a media preview Aug. 15.

It was in 1999 when that smell from those onions — heaped and frying on a grill in front of Jimmy’s Lunch — was named one of the ten most iconic memories of the 20th century in a poll completed by British Columbians to mark the turn of the millennia.

And today, the smell is just as inviting. When Jimmy’s Lunch first began serving up burgers and hot dogs at the Fair at the PNE in 1929 and today the stand is still operated by members of the Parsons family, including grandchildren and great grandchildren.

And when it comes to burgers, Jimmy’s Lunch sticks to the classics with not a sign of a cricket or lump of garlic ice cream to be found.

It’s a recipe for success because 2019 marks the 90th year Jimmy’s Lunch has been selling to fairgoers at the PNE, which this year celebrates 109th year. It’s estimated Jimmy’s Lunch has fried up at least 900 tonnes of onions over the course of those 90 years.

To mark the occasion the PNE has placed a permanent picnic table with a plaque commemorating the anniversary in front of the stand, which is covered in white tents and has a seating area.

Besides celebrating the old, this year’s Fair at the PNE is also embracing the future with a large interactive display from TransLink dubbed Transport 2050, which has a goal to gather input on what this city’s transit and road systems will look like in the future.

The exhibit explores the past, present and future of transportation in and around Vancouver and includes a 3D “MicroCity” animated model of Metro Vancouver, an immersive virtual reality experience and much more.

The Transport 2050 public engagement bus will be on site and the public is invited to take the Transport 2050 survey and enter into a draw for tickets to that evening’s Summer Night concert.

Fairgoers with dreams of being a star can also pose in front of a microphone holding a guitar, grab a seat on a bumper car, pose surrounded by dozens of stuffed animals or recreate a ride on the iconic wooden roller coaster.

Speaking of selfies, at the entrance to the Italian Gardens the head of a massive T-Rex dinosaur allows you to climb inside for a photo op before you continue forward into a scene straight out of the movie Jurassic Park.

It’s there a field of animatronic dinosaurs wander as part of the Dinosaur Stomp exhibit.

Also new this year is the Revel District, an area dedicated to food, adult beverages and entertainment — and where guests can take in the nightly show For the Love of Drag, produced by Tuck Entertainment on the Tim Horton’s Stage.

For a complete schedule of live shows, entertainment and programs visit pne.ca.