Think of Judson Beaumont as the Furniture Whisperer if anyone can make furniture talk, its the creative mind behind Straight Line Designs . Take Vern. Vern is a four-drawer dresser with a sleek maple veneer.
Sep 17, 2013 9:00 PM By: Vancouver Courier Staff 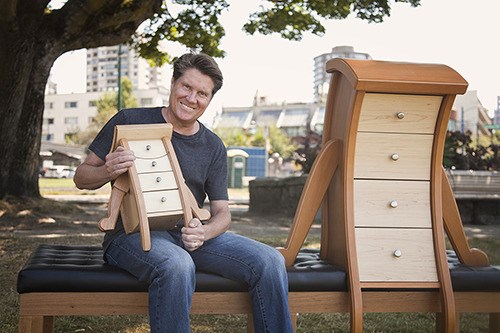 Think of Judson Beaumont as the Furniture Whisperer if anyone can make furniture talk, its the creative mind behind Straight Line Designs.

Take Vern. Vern is a four-drawer dresser with a sleek maple veneer. Instead of standing tall, however, you get a sense that hes got a bit of the weight of the world on his slightly stooped shoulders. When Beaumont felt that Vern was a bit tired from all of his organizational duties, he gave Vern a bench to sit on, as well as two arms so Vern could prop himself up and not have to worry about falling over.

Hes not sad, hes just nervous, says Beaumont. Hes got a lot on his mind.

Its a good thing Vern now has someone else to talk to. His son, Parker, was born a couple of years ago and is a very good listener. (Not that Parker has many options other than sitting still.)

When Beaumont first started out as a furniture designer, he was, as his business name suggests, all about straight lines. After five years, however, he got bored of all those hard edges and geometrical shapes. He didnt want normal any more. His new normal had to be fun.

Around that time he was beguiled by the ToonTown scenes in Who Framed Roger Rabbit?. The soft-shaped buildings talked and showed emotion. Why couldnt furniture do that? It still had to be functional the doors had to open, the drawers had to pull out but that didnt mean it couldnt also be whimsical.

Thats when Vern was born and, since then, has taken on a life of his own.

In the summer, Beaumont, Vern and Parker were in Hong Kong, where they were centre stage of an exhibit in a shopping mall. The crowds loved him.

Vancouverites will have a chance to meet Vern and Parker at IDSWest at the Vancouver Convention Centre. From September 19 to 22, top designers and manufacturers will be showcasing some of their most innovative designs.